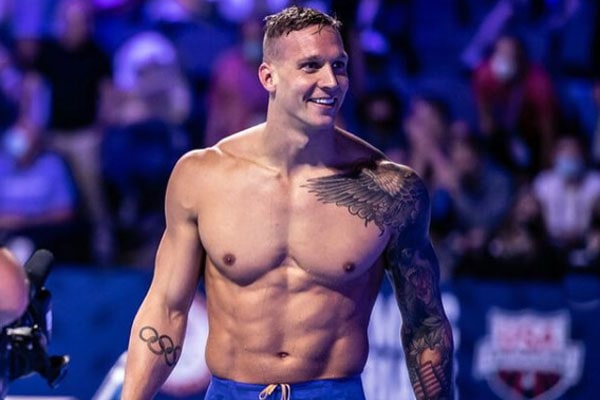 Already hailed as a natural successor to Michael Phelps, the most decorated Olympian of all time, Caeleb Dressel won his first gold medal at the 2020 Tokyo Olympics after leading the men’s 4×100-meter freestyle relay. Soon after, the U.S. Olympic Corridor of Fame member Rowdy Gaines described Dressel as the best swimmer on the planet; bar none, many are predicting him to win large on the 2020 Tokyo Olympics.

Besides his astounding achievements, his appealing tattoos are catching the eye of his numerous followers. So here, let’s take a peek at all of Caeleb Dressel’s Tattoos and what they mean.

One of Caeleb Dressel’s tattoos includes an eagle tattoo inked on his left shoulder. One of the wings of the eagle tattoo broadens to Dressel’s left chest and back. The popular artist James Cumberland inked the tattoo.

Moreover, the world champion swimmer also had a tattoo of the American flag just below his eagle tattoo. His eagle tattoo perfectly harmonized with the flag, both representing his affection and tribute to his country. However, the American Flag tattoo has been covered with a newer tattoo now. The tattoos help Caeleb’s fans to recognize him when he takes part in swimming competitions easily.

Caeleb Dressel sports a Florida black bear tattoo on his left upper arm. Dressel feels that the bear is his spirit animal and perfectly captures his soul. Once again, James Cumberland is the tattoo artist behind Caeleb’s finely crafted bear tattoo.

As we can see in Caeleb Dressel’s tattoo, the bear looks aggressive. The interrelationship is easy to see as professional swimmers also require to channel aggression positively.

Moreover, the ace sprint swimmer did the black bear because it is his favorite animal.

Another Caeleb Dressel tattoo includes a face of an alligator on his left forearm. The athlete inked the gator tattoo as a tribute to his alma mater, the University of Florida.

As Dressel revealed in a clip for Mad Rabbit, he began building the piece with an alligator design. He added that as he was born and raised in Florida and swam at the UoF as part of its Gators team, he decided to do an alligator.

Furthermore, during an interview with Swimming World, Dressel further opened up about the idea behind his overall tattoos on his left arm. He said that his whole left sleeve is Florida-themed. As mentioned above, he has got the gator, the black bear, and an eagle, which are all native to Florida. On top of that, he also has Magnolia flowers on the inside.

The handsome swimmer, Caeleb Dressel’s right upper forearm is inked with colored Olympic rings, again by none other than James Cumberland.

Caeleb Dressel Blames His Brother For His Tattoos

As Dressel explained in a promotional video for Mad Rabbit, he grew an interest in ink around the same time his big brother decided to get a full sleeve. Furthemore he said that one could blame his brother for almost all the tattoos he has.

According to Dressel, his brother started a full sleeve around 19 or 20. He saw how cool it looked and how it was art. Dressel looks up to his big brother a lot, and so obviously, he wanted to copy him. So he went to the same artist as his brother.

Currently, Caeleb Dressel does not seem to have any plans to add more tattoos to his body. However, his mind can change anytime, and we might see him sporting new designs on his body.