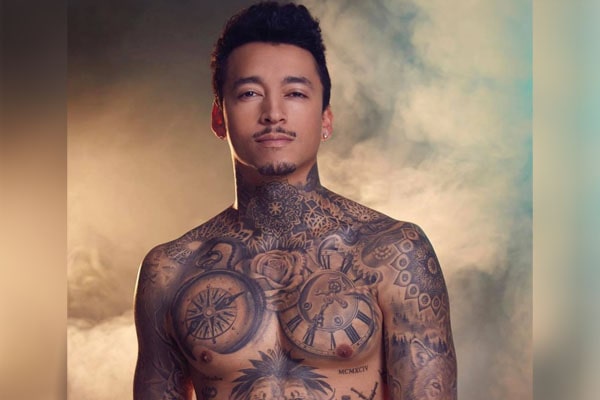 The world-known street skateboarder Nyjah Huston has been showing his skateboarding skills since his early childhood. He got his first skateboard at the age of 4, and by 5, he was already practicing the ollies. At 8, Huston started showing progress in skateboarding at an astounding rate. Then, at 10, he participated at the 2005 Tampa Am. Currently, Nyjah Huston is one of the top skateboarders worldwide, whom hardly a few sports fans do not recognize.

While skateboarding professionally in the streets, Nyjah Huston loves to display his tattoos which he has inked all over his neck, arms, legs, and other parts of the body. Here, please take a peek at almost all of Nyjah Huston’s Tattoos and their meanings.

ALSO READ: Actor Justin Theroux’s Tattoos And The Meanings Behind Them

Nyjah Huston’s tattoo’s story started in the same place where his career took off, but, thankfully, at a different time. In 2013, when Huston was in Florida to participate in the Tampa Pro contest, people were getting tattoos outside in the parking lot. One of his friends was also getting one and looking for someone to join him.

Me 4 years ago “ya I’ll never get tattoos”… pic.twitter.com/pR9rI0pou0

At first, Nyjah Huston denied his friend’s proposal of getting a tattoo with him as he was not ready for that and had not even planned for it till then. Eventually, his friend succeeded in convincing him. Huston inked his forearm with the classic Thrasher ‘Skate and Destroy” logo. Within some seconds of getting his first tattoo, he had to go back for practice for his contest.

Nyjah Huston did well in the 2013 Tampa Pro. He achieved second place in the contest.

After getting his first tattoo in 2013, Nyjah Huston went on to decorate different parts of his body with impressive black-and-grey works by a couple of artists. Huston’s collection includes tattoos from several artists, including Corey Divine, Paul Timman, Thomas Hooper, Daniel Silva, and Sam Dusenberry.

Huston has got a mandala on the front of his neck along with a triangle and eye, which he inked randomly. Thomas Hooper did all three of them. The first two days of getting tattoos on his neck took place in Texas, and to finish the job, Hooper flew out to his place in L.A.

In 2020, when Nyjah Huston wrecked his ankle and gave a pause to his skateboarding, he took the opportunity to get another tattoo from Corey Divine. Divine added some decorative blackwork to Huston’s back arm, a beautiful partial mandala. Besides, Huston has tattooed his other body parts, including his left arm, some portion of his right thigh, and the back of his hand, with different mandala patterns.

Furthermore, other Nyjah Huston’s tattoo collections include tattoos of a compass, rose, lion, letters ‘MCMXCIV,’ sword, heart signs, and many more at the front side of his body. Moreover, both of his legs are inked with different tattoo designs, including emojis, skulls, arrows, wrist bones, and much more.

Excluding his face, almost every part of Nyjah Huston’s body is inked with different tattoo designs. Probably, Huston might have over a hundred tattoos on his body which might have deep meanings to him. But, sadly, he has not revealed their meaning to date. We hope he will open about it to his fans shortly.

Removal Of His Mom’s Portrait Inked On His Chest

Among hundreds of tattoos inked on Nyjah Huston’s body, there was a portrait tattoo on his chest. It was a portrait of Huston’s mom. However, it became his first experience with a cover-up and laser removal as he did not like the way it was. According to Nyjah, his mom’s portrait was too bleached for that area, and he wanted his chest to be darker. So, he decided to remove it.

Nyjah Huston underwent four painful laser sessions and redid his chest with another tattoo to cover it up. Though it was harrowing, Huston was pleased with his decision. So was his mom.

Well, Nyjah Huston does not want to repeat the laser removal treatment again on his body. So, keeping that in mind, lately, he has been careful about his tattoo decisions.

Any Plans To Add More Tattoos?

Being a professional skateboarder, Nyjah Huston is mostly busy with his schedules. However, he still manages his time to get out in the streets and get new arts on his body. Lately, he is busy preparing himself for the upcoming Tokyo Summer Olympics 2021. Though Olympics is Huston’s primary focus at the moment, he plans to add more tattoos to his collection.

During a recent interview, Nyjah Huston revealed that he would be down to get an Olympics tattoo if he came out with the gold. So, Huston is still not done yet with his tattoos. He seems to plan to decorate his body with tattoos till there is any space left, excluding his face.