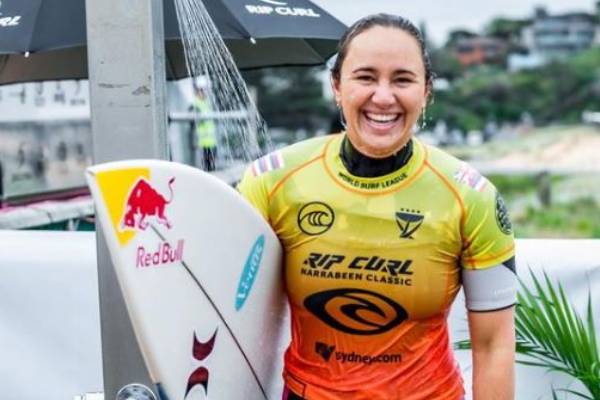 The immense popularity that Carissa has resulted in a huge fan base around the world. And fans are always curious to learn about her personal life, net worth, and how much she earns in her career. So, find out how much is Carissa Moore’s net worth and her earning source.

Carissa Moore Net Worth And Earnings

A Hawaiian native, Carissa, began surfing at the age of five and began competing and winning the competitions by the age of 11. Since the beginning of her career, she seems to have succeeded.

Thus, all thanks to her successful surfing career, Carissa Moore’s net worth might be in the millions. However, some of the online sites suggest that her fortune is around $4 million.

Income As A Surfer

As mentioned earlier, the talented surfer, Carissa, began surfing at the age of five with her dad off the beaches of Waikiki in Honolulu, Hawaii. Her dad was a competitive water swimmer who had claimed victories in numerous competitions.

By the age of 11, Carissa had competed in several competitions and had even earned multiple wins at NSSA junior surf competitions. Furthermore, she also claimed top spots at the ISA World Junior Surfing Championships and even gained a victory.

In 2010, Carissa qualified to compete on the World Surf League (WSL), which was then called the ASP World Tour. She was named the Rookie of the Year 2010 after winning two major contests and finishing third overall.

In addition, she finished first place at the 2019 World Surf League Women’s Championship Tour. As a result, she was qualified for the Olympics 2020.

Furthermore, Carissa also had earned $1 million as the winnings in 2017, which consisted of around $194K as prize money in WSL events.

According to SurferToday, the winner of each of the 11 Championship Tour events takes home $100,000. Thus, Carissa must have bagged significant money after finishing first in the Championship Tour.

Moreover, Carissa has also competed in different qualifying series. In 2010, she became the first woman in history to be granted a wildcard entry into the Men’s Triple Crown of Surfing.

Furthermore, the annual income of the number one Qualifying surfer in the world is $65,000. Similarly, the winner of each of the Qualifying Series 10,000 events receives $30,000 in prize money.

Thus, Carissa must have earned significantly while participating in different competitions. Furthermore, her career earnings between 2010-19 were $2.1 million. Therefore, she has earned a considerable amount of money from her surfing career.

Also Read: The Drummer, Chris Slade Net Worth And Earnings

For any athlete accumulating immense fortune and popularity, their other source of income is sponsorship deals or endorsements for various brands. The victories and success that Moore has achieved in a significant time of her career must have attracted several sponsors.

Carissa promotes several brands on her Instagram profile. These sponsorship deals and endorsement offers might have helped her increase her fortune significantly.

As a result, Carissa Moore’s net worth must be a huge sum. And as she is still dedicated to her career, there’s no doubt that her wealth will increase in the future.

As mentioned earlier, Carissa Moore’s fortune might be in millions. Well, with a net worth like that, it’s no surprise if she enjoys a luxurious lifestyle. She lives a comfortable and blissful life with her husband, Luke Untermann, in Oahu, Hawaii.

Carissa Moore’s husband is an entrepreneur. He runs a business with his four childhood friends, an Oahu-based food truck, Banán. The business seems to be doing great, and he must be earning significantly from the business. As a result, Carissa might also have made a significant profit as the ambassador of the business.