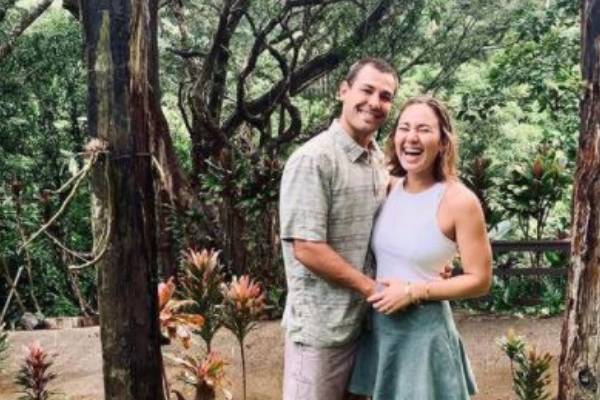 Carissa Moore and Luke Untermann have been together for almost 13 years. Image Source: Carissa Moore Instagram.

Luke Untermann is the handsome husband of American professional surfer Carissa Moore. The adorable pair have been together for a long time, and their marriage is going strong.

Dated For Few Years Before Tying The Knot

The successful surfer, Carissa Moore, and her partner, Luke Untermann, share a blissful marital life and have been together for several years. The duo met in high school around 2009 and began their relationship. After dating for seven years, Luke proposed to her in June 2016.

Luke Untermann’s partner, Carissa, shared the news of their engagement via Instagram post. The engaged pair waited for a year and a half to get married, and Carissa said that during that period of time, she just wanted to know who she was when she walked down the aisleJohn John Florence.

Luke Untermann’s wife, Carissa, shared several pictures of their wedding. Talking about the bridal dress, she wore a white dress with a high neck and low back. Furthermore, to keep things beachy, she opted to go without shoes or a veil. In addition, she wore her favorite Hawaiian Cartier and bracelet.

The adorable couple of Carissa Moore and Luke Untermann is deeply in love with each other. We hope that their marriage remains the same forever. Similarly, they are yet to become parents, and they seem like people who can be great parents.

Carissa Moore’s husband, Luke Untermann, is an entrepreneur. He attended the Punahou School, and upon graduation from there, he attended the University of Hawaii at Manoa. He graduated in May 2016 with a business degree.

The partners started the business with hopes of serving healthy food and supporting Hawaii’s agriculture. Luke and his business partners moved home to Hawaii and purchased a food truck for $2,000. It was in 2014 when they made their first dollar at Pipemasters.

They transform Hawai’i-grown bananas into a dairy-free soft serve. Similarly, they create several flavors by mixing other island-grown fruits, species, and veggies. Their product is vegan, gluten-free, paleo, and other good stuff.

Carissa Moore’s husband, Luke, seems to be doing great in his business, and we hope that his business provides more profit for him in the future.

Is Supportive Of His Wife

Luke Untermann’s wife, Carissa, is a popular professional surfer, and her husband is supportive of her career. She began surfing at a young age and won multiple competitions at the age of 11. After that, she has competed in several tournaments.

Furthermore, Luke’s partner also qualified for the 2020 Summer Olympics held in Tokyo, Japan. In the first round of the competition, Carissa won her heat by scoring 11.74. As a result, she was directly advanced to the third round of competition. Similarly, in the third round, she competed against Sofia Mulánovich and won her heat by scoring 10.34.

Carissa’s hubby, Luke, often accompanies and often travels with her to several tournaments. However, he could not accompany her to the Olympics 2020 because of the strict COVID-19 rule. Nonetheless, he is supporting and cheering for her virtually.

Luke’s wife, Carissa, has gained immense fame as a professional surfer. Similarly, Luke also came into prominence as Carissa Moore’s partner. Despite the fame, he seems to be preferring to live a life away from the media and the limelight. He does not have an Instagram profile and does not post much on his Facebook.

Nonetheless, he might be living a great life. So here’s hoping to learn more about Carissa Moore’s husband, Luke Untermann, in the future.