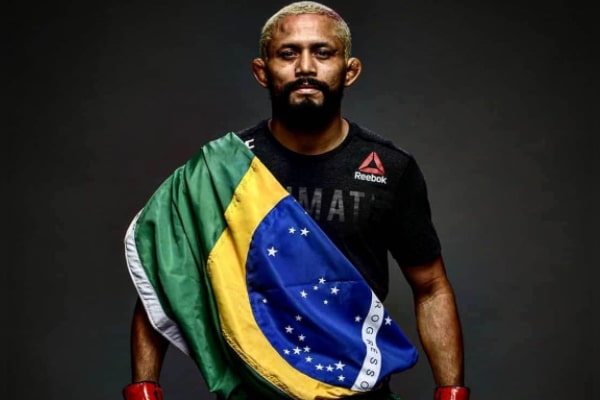 Deiveson Alcântara Figueiredo is the guy who saved the flyweight division in the Ultimate Fighting Championship from nearly getting fizzled. He is a mixed martial artist from Brazil who has been a professional since 2012.

The 33-year-old has had numerous career transitions and is the UFC Flyweight champion. Born in poverty in the isle of Marajó, Brazil, the MMA fighter was a buffalo riding cowboy. And before making his professional debut, the former champ worked as a hairdresser, sushi chef, and bricklayer.

According to various sources after joining the UFC, Deiveson Figueiredo‘s net worth is estimated to be $2 million. Below, let us look at his income sources that attribute to his fortune.

UFC Is His Biggest Pay Check

Deiveson Figueiredo goes by “Deus da Guerra” in the MMA world, which means “God of War.” The Brazilian Jiu-Jitsu blackbelt competed in Amazon Fight, Knock Out Combat Icoaraci, and Jungle Fight before moving to UFC.

The champ was guaranteed $48,000 per fight after his break out in the UFC. The table below illustrates some of Figueiredo’s notable total earnings in the UFC as per The Sports Daily: –

The Brazilian cowboy defeated the legend, Joseph Benavidez, twice and headlined back-to-back UFC main events. UFC has been the biggest contributor to Deiveson Figueiredo’s net worth.

The Face For Sea Telecom

Brazil’s newest MMA prospect is also the face of the networking company Sea Telecom based in Rua Coronel Leal, Brazil.

The main goal of the company is to create a large fiber-optic network throughout the country. Plans are starting from $99 to $190 with installation fees from $150 to $210.

The Brazilian athlete might be getting some hefty payment as the provider operates for both individuals and companies. The exact amount is not revealed, but we can assume it to be a huge contribution to Deiveson Figueiredo’s net worth.

Deiveson Figueiredo has a pretty solid physique for a 5’5″ contender. Since most of the UFC event is held in the United States, the 20-2-0 fighter trains in Excel Dixon Wellness Center.

The training facility is 100% authentic with no contracts and no ridiculous fees. It offers many amenities such as free towel service, saunas, military discounts, free wifi, etc.

The fitness center even collaborated with Deus Da Guerra for their merchandise which included bottles and clothing apparel.

Owns A Gym In Belém

Team Figueiredo is the training facility owned by the former UFC champ, which also represents him as his corner.

Located in Belém, Brazil, it offers training in MMA, boxing, jiu-jitsu, Muay Thai, and wrestling. It is also the home of UFC women’s flyweight contender Viviane Araujo and Priscila Cachoeira.

Brazil’s fitness industry is always booming, and the average monthly cost is estimated to be around $35. For Figueiredo’s gym, the cost might be higher due to the star power present.

Since this is his own solo venture, we can say Deiveson Figueiredo’s net worth to be attributed to it.

A video game character inspires the entire look and personality of Deiveson Figueiredo.

Santa Monica Studio’s “God of War” is an ongoing game franchise that is PlayStation exclusive. The game has a huge fan following and especially because of the lead character, “Kratos.”

As for Marajó, born who is also called God of War is one of its fans. So much so, he even depicts Krato’s hairstyle and often posts pictures of their comparisons.

The studio might have noticed his antics and maybe are urging him to continue doing so. Since the franchise is far from done, Deiveson Figueiredo’s net worth is sure to bump.

UFC’s Kratos-loving fighter enjoys living life lavishly but always sticks to his roots. The father of two is up to date, carrying the latest electronic gadgets and dressing with the latest fashion.

The former sushi chef also keeps himself healthy by regularly going to the best health facilities and chiropractor centers. He also enjoys splashing the cash on special occasions.

Aside from his cars, Figueiredo also owns a water buffalo which he named “Ferdinand.”

Nevertheless, the UFC flyweight is far from done with his MMA career. His highest paycheck was $640,000 for his bout with Brandon Moreno, which ended in a draw. In his rematch in UFC 263, headlined by middleweight Israel Adesanya and Marvin Vettori, he lost his championship making Morena the first UFC Mexican champion.

Since Figueiredo is a prominent MMA figure, it is sure that his net worth will increase in the days to come. We wish Figueiredo the best for the upcoming fight and his career.