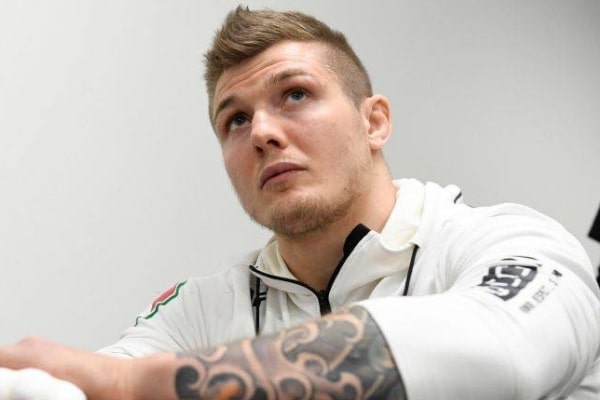 Competing in the middleweight division, the Italian fighter is finally considered one of UFC’s title contenders. He recently became the no.3 ranked middleweight but has already accomplished much in his native country.

The 27-year-old was a former Venator Fighting Championship welterweight champion. Below, let’s look at some interesting facts about Marvin Vettori, including his career, love life, family, and net worth.

Started Training At The Age Of 13

Marvin, “The Italian Dream” Vettori, was interested in MMA at a very young age. The UFC fighter started training kickboxing six days a week at the age of 13.

As MMA was still growing in Italy, Vettori trained in 6 different gyms to perfect his skills. He was inspired by PRIDE FC legends like Fedor Emelianenko, Mirko Cro Cop, and Maurício Rua.

Following his passion, the Italian Dream would move to London to polish his skills more in a fixed schedule. He would later move to the United States and train at Kings MMA.

Also Read: Jorge Masvidal Is A Father Of Three

The former Venator Champ has always been close to his family, especially his mother and brother. The Italian is the eldest of his three siblings, but only one’s identity is publicly known.

Marvin Vettori’s brother, Patrick Vettori, is a real estate agent based in his hometown. In March of 2019, the UFC fighter’s sibling graduated in economics and management from the University of Trento.

Along with his brother, Marvin is also accompanied by his young niece and nephews, whose identities are undisclosed similar to his other sibling.

Regarding Marvin Vettori’s girlfriend, the Italian fighter may be single. He has never been linked with someone despite being a handsome hunk.

Other than his MMA, the brother of 3 is also known to troll his opponents. In August of 2020, Vettori posted a picture of fellow UFC contender Chris Weidman in which he was portrayed as a girl with the name “Christina Weidman.”

This was the only instance related to Marvin Vettori’s lovelife posted by him. Maybe staying single has worked out well for him to give his 100% on his training.

But since the 6 ft athlete is becoming a UFC star, we hope to see him with someone soon.

The former Venator Champ made his UFC debut in UFC 202, headlined by the rematch of Conor McGregor and Nate Diaz.

In his 5 year run in the UFC, Marvin Vettori has had both wins and losses. The 27-year-old has faced top middleweight talents like Israel Adesanya, Cezar Ferreira, Karl Roberson, Andrew Sanchez, Jack Hermansson, and Kevin Holland.

The 27-year-old lost the rematch with the middleweight champion, Israel Adesanya, in the main event for UFC 263. This was Vettori’s first try at UFC’s gold, and the fight card also included Deiveson Figueiredo vs. Brandon Moreno as the co-main event.

The UFC is not short of fighters with amazing tattoos, which they flaunt on their fight nights. Out of those great artworks, Marvin Vettori’s tattoo is of a samurai.

The whole tattoo spreads from the chest and overs his full left sleeve. The colorful Japanese artwork includes waves, multiple koi fishes, and a dragon wrapping up his entire sleeve.

It’s a wonder to the eyes and fits well in Marvin’s huge physique. Some other great tattoos in the UFC are donned by Alexander Volkov, Megan Anderson, Valentina Shevchenko, and Tyson Pedro.

The Italian Dream Apparel is owned and promoted by Marvin Vettori. The 6ft fighter’s company focuses on streetwear clothing which was founded in 2020.

The main aspect other than streetwear also focuses on its root as combat sports and mostly dream. The store includes sweatshirts, t-shirts, and joggers.

The most expensive product is the Benkei Sweatshirt, which is priced at $69.90. According to the MMA pro, the Italian Dream Apparel is not just a brand but a lifestyle.

Marvin Vettori’s net worth is estimated to be $600,000 and is mostly sourced by his MMA career. So far, his highest paycheck is $153,000 from his bout with Karl Roberson in UFC on ESPN: Eye vs. Calvillo.

The title contender’s total UFC earning is $688,000 so far. Other than his MMA career, as mentioned above, he also owns a clothing apparel company.

Marvin Vettori’s net worth is also supported by his endorsements with Tsunami Nutrition. The Italian company has also endorsed fitness enthusiast Danny Lazzarin and tennis player Fabio Fognini too. German automobile manufacturer Audi is also a sponsor for the skilled fighter.

Therefore, Marvin Vettori is living life to the fullest by spending time with his loved ones and by getting busy in his career. He has promised to become the first Italian UFC champion.

We wish the very best to Marvin Vettori for his upcoming bout and for the days to come.