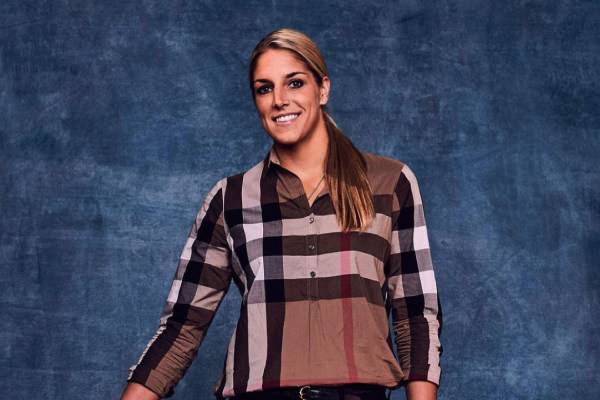 Elena Delle Donne is a professional basketball player of American nationality. She currently plays for the Washington Mystics of the Women’s National Basketball Association (WNBA). Elena’s exemplary basketball skills have helped her gain an enormous fortune through the salary, sponsors, along with tremendous stardom.

With the increasing fame, the fans are curious to learn how much the Washington Mystics’ shooting guard makes in the year and her earning details. So, today, we shall learn about Elena Delle Donne’s net worth and earning details.

According to Celebrity Net Worth, the talented basketball player Elena Delle Donne’s fortune is estimated to be $400 thousand. However, some other sites suggest that her estimated net worth is $1.4 million. Whatever might be the exact amount it is clear that Elena has earned a considerable sum from her career as a professional basketball player.

So, let’s get to know how the two-time WNBA MVP has earned such a massive fortune in her name and what Elena’s earning sources are.

Income As A Professional Basketball Player

Aforementioned, the 2019 MVP champion Elena Delle Donne’s fortune mostly comprises her earnings from her professional basketball career. Plus, she has also competed in several national and international championships and has accumulated numerous accolades as well as prize money from these competitions.

Elena attended Ursuline Academy in Wilmington, Delaware. There she gained national recognition as a high school basketball star. Her high school career was successful as she had helped her team win several tournaments. Moreover, she was also named a WBCA All-American, and after scoring 17 points in the 2007 WBCA High School All-American Game, she earned MVP honors for the Red team.

Following her successful high school career, Elena attended the summer school program of the University of Connecticut, where she received a basketball scholarship. However, she dropped out of the program in early June 2008. After her long break, Donne enrolled at the University of Delaware.

In that season, she was named the player of the week once and the CAA Rookie of the Week six times. Then, during her sophomore year, she was diagnosed with Lyme disease, the disease which she again fought during the 2012-13 season. After that, too, she played for her team in several championships and helped them acclaim victory.

Elena might have received a significant amount of prize money as she won various tournaments and individual awards during her high school and collegiate career.

After her collegiate career, in the 2013 Draft, the Chicago Sky selected Elena as second overall. While playing for the team, she won the title of WNBA MVP for the 2015 season. Chicago Sky traded her to the Washington Mystics in exchange for Stefanie Dolson and Kahleah Copper and the second overall pick of the 2017 draft.

Elena made her debut for the Washington Mystics on May 14, 2017. She is currently playing for the same team but sat out the 2020 and 2021 WNBA seasons due to pre-existing COVID-19 risk factors and health concerns.

Apart from the prize money, Elena has made a significant amount by playing with two different teams. She signed a 4-year contract worth $899,480 with Washington Mystics. The contract also includes an average salary of $224,870. Furthermore, in the 2021 season, she will be earning $221,450 as a base salary with a cap hit of $221,450.

Here is the table showing the contract detail of Elena with Mystics, and her estimated earnings in the upcoming seasons as per Spotrac.

As a result, Elena Delle Donne’s net worth might have risen significantly from her yearly earnings as a player of the Washington Mystics. She is also the 2016 Olympic Gold Medalist. Along with the medal, the 2019 WNBA champ, Delle Donne, might have taken a significant amount as a cash prize, thus increasing her fortune.

Has Her Own Woodworking Business

Delle Donne decided to make a table with her wife after they were unsatisfied with the furniture selection at several shops. After things took off, the pair decided to run their own woodworking business.

Here are some of the items from the Deldon Designs and their prices.

Their business seems to be doing great, and she might be earning significantly from the shop. Furthermore, she has also written books about her skills. The books, My Shot, and Hoops might have helped her earn significantly.

As mentioned earlier, Elena Delle Donne’s major source of income is her career as a professional basketball player. Besides making money from the prize money of various tournaments and contracts, the talented player also earns significantly from the sponsorship deals from different sports organizations and private businesses.

In August 2019,  Elena collaborated with Nike to make shoes for differently able people like her sister, Lizzie Delle Donne. They unveiled a new shoe named Air Zoom UNVRS. The shoes were said to be made available to the public in November 2019.

In July 2013,  the multi-national science company DuPont announced its sponsorship with Elena. At that time, Nike and Genesis Today were also her sponsors.

There’s no doubt that Elena Delle Donne’s net worth increased from the several sponsorship deals she has signed with well-known brands. In addition, she is still very dedicated to her professional basketball career, so there is no doubt that her fortune will increase in the future.

Besides the above-mentioned factors, Elena has also earned significantly from her YouTube channel. She has 4.39K subscribers on her channel, where she uploads different episodes of her podcast, Beyond The Game. Furthermore, she also uploads several vlogs on her channel.

As mentioned earlier, Elena Delle Donne has a net worth of $400 thousand. Such a massive fortune has allowed her to live a life full of luxuries and comfort, and afford luxurious cars and a house.

Moreover, one cannot doubt that she pays a considerable amount in taxes. Furthermore, in October 2018, she listed her Alexandria property, which she had purchased in 2016. According to Redfin, the home was last sold on January 7, 2019, for $881,000. However, it is unclear if Donne was the one who received such an amount for the house.

Thus, we hope that Elena continues to enjoy her comfortable and happy life with her wife, Amanda Clifton. Plus, with her increasing fame, Elena’s net worth will undoubtedly reach new heights in the coming days.