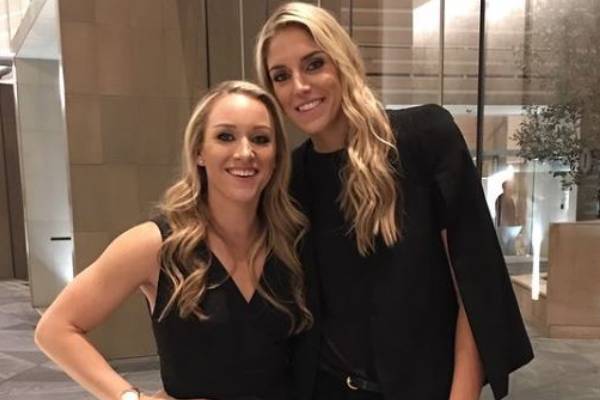 Amanda Clifton is the lovely wife of Elena Delle Donne, a professional basketball player currently playing for the Washington Mystics of the WNBA. As a part of the US women’s national basketball team, Elena has gained immense fame and fortune in recent years.

With the increasing popularity of Elena, her spouse, Amanda, is also no less than a celebrity. Basketball fans are curious to know about her and their love life. Thus, today we shall learn in detail about Elena Delle Donne’s wife, Amanda Clifton, and her personal life.

As stated earlier, Amanda Clifton shares a blissful marital life with Elena Delle Donne. The love birds have been together for several years. Elena’s best friend introduced her to her future wife, Amanda in June 2013.

The pair bonded over their love for basketball and dogs. While Elena is a star WNBA player, Amanda used to play basketball at Illinois State University. Moreover, at the time of their meeting, both women already had their own dogs.

With these common points between them, Clifton and Donne began dating and soon became inseparable. And after three years, the lovebirds got engaged on June 2, 2016.

The following year, on November 3, the couple tied the knot. They got married in a lovely ceremony at the Hempstead House of Sandas Point Preserve on Long Island. Furthermore, the Facebook page of The Knot, live-streamed their wedding ceremony.

The duo seems to be enjoying their marriage and is deeply in love with each other. Amanda and Elena Delle Donne are yet to welcome any children together. But when they do, let’s hope the couple shares the happy news with the world.

Runs Their Own Woodworking Business

The professional basketball player became interested in woodworking after she was left unsatisfied with the furniture selection at several shops while shopping with her wife Amanda. Then, things took off when the couple made a decision to make their own table.

Moreover, Amanda is the one who actually makes the basketball hoop, table, and other furnitures from the Deldon Designs. The pair seems to be doing great in their business, and many people love their product.

Apart from being the designer at Deldon Designs, Elena Delle Donne’s spouse, Amanda, also works as the Vice president at The Elena Delle Donne Charitable Foundation. The foundation’s mission is to raise awareness and funds for Lyme Disease research and special needs programs. Elena herself has Lyme disease and suffers from occasional flare-ups.

The foundation has been working with the belief that every individual has the right to be treated with dignity, respect, compassion and seek to improve treatment options and health outcomes.

Furthermore, Amanda also works as Director at De11e Donne Academy. The academy organizes several basketball camps which aim to provide quality instruction in a fun environment and help them learn about technique, sportsmanship, and teamwork. As a director, Amanda must be looking after every camp and program.

Elena and Amanda love each other deeply, and they do not shy away from sharing their love for each other. And we hope that the couple’s love keeps on strengthening with each passing day.