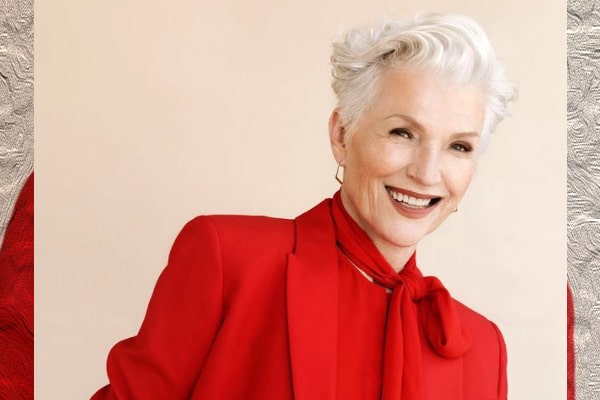 Maye Musk's net worth is massively influenced by her career as model-cum-author-cum-dietitian. Image Source: Maye's Instagram.

Maye Musk is a Canadian-South African model and dietitian famous as the tech-billionaire, Elon Musk‘s mother. Moreover, she worked as a model for fifty years before appearing in fashion magazines like Vogue.

Furthermore, The New York Post declared Maye Musk as the ‘star in her own right.’ She not just raised multi-millionaires and the richest man in the world but also became a multi-millionaire herself.

Therefore, let’s look into Maye Musk’s net worth and earnings from here on. Also, learn interesting facts about her along the way.

Aforementioned, Maye Musk worked as a model for five decades, and she continues to rock the modeling world even in her 70s.

According to Celebrity Net Worth, Maye Musk’s net worth sums up at $20 million. Because she has a multi-dimensional career, her assets might be more significant than our reach. Nevertheless, the most prominent achievements and wealth Musk can count on are her three kids, Elon Musk, Kimbal Musk, and Tosca Musk.

Well, for now, let’s disregard the emotional achievements and break down Maye Musk’s wealth and her sources of income.

Also Read: Know How Much Is Glen Powell’s Net Worth

As mentioned earlier, Elon Musk’s mother, Maye Musk, devoted fifty years of her life modeling before appearing on the cover of prominent magazines like Vogue, Women’s Day, and many more. Moreover, she started her career as a model after securing the position as a finalist in the 1969 Miss South Africa beauty pageant.

A year later, she married Errol Musk and welcomed three children, Elon, Kimbal, and Tosca. After nine years of marriage, the pair got divorced and had to work hard to raise her family.

However, as of now, she holds different tags, and one of them is a model. She started modeling at age 15 and had had four billboards in Time Square in her 60s. Furthermore, she has appeared on the Special K packages, Revlon ads, and a Beyoncé music video, Haunted.

Likewise, she also appeared nude on the cover of Time Magazine for health issues and New York magazine with a fake pregnant belly. Moreover, she was also on the cover of Elle Canada in 2012 and became CoverGirl’s oldest spokesmodel in her latest 60s. She also appeared in several other commercials like Covergirl, Target, Macy’s and Tiffany, and Co.

Even at age 73, Maye shows no signs of slowing down as Creative Artists Agency signed her in 2021. Given the experience, name, and reputation, Maye Musk’s net worth might see a significant rise this time as well.

Earnings As A Dietitian

Amongst the many crowns Maye Musk wears, one is of a dietitian. She earned a master’s degree in dietetics from the University of the Orange Free State in South Africa.

Professionally, she was a member of The Academy of Nutrition and Dietetics. Moreover, she stayed as a chairperson in the Nutrition Entrepreneurs of The American Dietic Association for a year until 2004.

Before her achievements, she served as the president for Consulting Dietitians of Canada for two years, from 1993 until 1995.

According to Salary.com, the average salary of a dietitian is $63,850. It falls between $58,117 and $70,160, and the range depends on essential factors like education, experience, certifications, and additional skills.

Therefore, Maye Musk’s wealth must have doubled, thanks to her entrepreneurship and excellent job skill as a dietitian. Besides wealth, she also earned some awards for her contribution to the nutrition world. Moreover, her career as a model also helped her uplift her prominence as a dietitian.

As of now, Maye Musk makes her money as an author and speaker.

Aforementioned, Maye Musk’s fortune has hiked since she bears the crown of a model, dietician, author, and speaker. After all the experiences and knowledge she accumulated, she decided to share them all via a book.

Musk’s memoir named A Woman Makes a Plan: Advice for a Lifetime of Adventure, Beauty, and Success, was published late in 2019. Similarly, by 2020, it was made available in six languages in addition to English.

The book talks about Maye’s career as a model and her entrepreneurial venture. Also, her experience as a kid and learning from her parents to her academic success and also raising three highly triumphant kids is also included in the book.

Furthermore, Maye Musk’s book sells for $16.01 for hardcover and $11.49 for the Kindle version. Since her book is gaining a good response, her bank accounts must have witnessed a significant rise in money.

While many are fans of Musk’s book and were inspired by her words but very few felt the book was misleading and did not know its direction. Either way, Maye Musk is also earning good bucks from her books.

Likewise, Musk’s net worth is also influenced by her career as a spokesperson. She reportedly traveled worldwide, giving talks in several countries’ major cities in the USA, Canada, and South Africa, including Melbourne, Stockholm, Kyiv, and Budapest.

A Lavish Home in LA

The self-made graceful model and dietitian became a successful person and is still working hard. She won’t stop soon as she is inspired by her mother, who worked until she was in her 90s.

As of now, Maye lives in a comfortable and lavish home in LA and frequently travels for modeling and her consulting practice. About vehicles, she drives, of course, Tesla Model S and tries not to miss SpaceX rocket launches.

Going through Maye Musk’s Instagram, she uploads pictures of her time in different states. She is in her 70s and looks nowhere near. Maye is as radiant as she can be, aging fine like Cheval Blanc St-Emilion. Her grandchildren often visit her in her LA home, and she seems to love their company.

According to The Guardian, Maye gives her grandkids advice and makes sure they have good manners. Besides, she revealed that the secret of raising billionaires and millionaires was to let them explore themselves.

Well, Maye Musk’s son, Elon Musk, is the world’s second-richest man with a net worth of $180.6 billion. Similarly, her second child, Kimbal Musk, is worth at least $500 million, and the youngest of all, Tosca Musk, has also built a massive fortune.

Maye Musk, who re-started her life thrice for her kids, is living lavishly at age 73, actively working and earning cash for herself. Undoubtedly, her primary source of income is modeling, but she also receives side cheques from her books and career as a dietitian. Therefore, we might see a significant rise in her net worth unless she stops working altogether.

Jackson Wang Net Worth – Is He The Richest Amongst The Got7 Members?

Ángela Aguilar Net Worth – Besides Music, What Are Her Other Earning Sources?

Pepe Aguilar Net Worth – Apart From Being A Musician, He’s Also An Actor