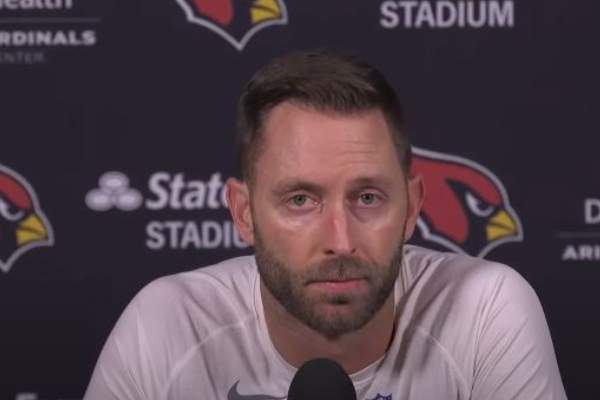 Kliff Kingsbury's fortune comprises of his earnings as a coach and a player. Image Source: Social Media.

Kliff Kingsbury is a renowned name in the sports industry. The handsome 6 feet 3-inch tall sports personality is the football coach who currently serves in the head coaching position for the Arizona Cardinals of the National Football League. He was a collegiate football coach from 2008 to 2018, and there he gained prominence for his development of quarterback prospects.

Kliff has been a successful coach for a long time now. In all these years of his professional career, he has not only gained fame, but he must have earned considerably. So, how much is Kliff Kingsbury’s net worth? How did he amass the fortune that he has?

Kliff Kingsbury Net Worth And Earnings

Kliff started playing football at New Braunfels High School under his dad Tim Kingsbury, the then-head coach. Then, he continued playing at Texas Tech University, where he played quarterback. He also had a brief professional playing career, and in 2008, he started his coaching career.

It has been many years since Kliff began his professional career. As mentioned earlier, alongside fame, he has earned a significant sum. Even though he has not been completely transparent about his earnings, they must be in the millions of dollars. Thus, his coaching career significantly influences Kliff Kingsbury’s net worth.

Kingsbury’s Earnings As A Player

As mentioned earlier, Kliff played at Texas Tech University as a quarterback. After completing college, he decided to play professionally. In the 2003 NFL Draft, the New England Patriots selected him in the 201st overall selection (6th round). But he did not play in the 2003 season. Later, on September 6, 2004, the Patriots waived him. Nevertheless, he was teammates with Tom Brady then.

Afterward, Kingsbury spent the whole 2004 season with the practice squad of the New Orleans Saints. Then, in September 2005, he was signed to the Denver Broncos practice squad. After that, he signed with the New York Jets and the Buffalo Bills.

The sports personality was also assigned to the Cologne Centurions of NFL Europe by the New York Jets in 2006. He also signed with the Montreal Alouettes. Later, he was traded to the Winnipeg Blue Bombers. All in all, Kliff’s playing career was brief, but he earned significant fame and fortune.

In his coaching career, Kliff signed several contracts. When he first joined Texas Tech, his contract included a base salary of $10.5 million over five years. In August 2014, he agreed to a new contract with the team. It was worth $3.1 million in 2015 and also included a $200K raise each year through 2020.

As per spotrac, Kliff first signed a $22 million four-year-long contract in 2019 with the Cardinals. In March 2022, the Cardinals’ head coach signed a contract extension through the 2027 season with the team. However, the amount has not been revealed yet. But, given that he has many years of coaching experience, he must be earning considerably.

Therefore, Kliff Kingsbury’s net worth must be a substantial sum from his coaching career.

As mentioned earlier, Kliff Kingsbury’s fortune must be a notable sum. Having led a successful coaching career for many years, his commitment to work has paid off for him as he has earned considerably. As a result, he must be enjoying a comfortable lifestyle with his family.

The head coach owns a lavish mansion in Paradise Valley, Arizona, which is worth $4.45 million. He bought it shortly after the Cardinals hired him as their head coach. Furthermore, his multi-million-worth house went viral in April 2020 during the NFL Draft.

Likewise, Kingsbury must have a good collection of cars and must be paying a notable amount in tax and insurance. As he is still active in his professional career, there is no doubt that his fortune will significantly increase in the coming days. Thus, he will be able to continue living a comfortable life for years to come.