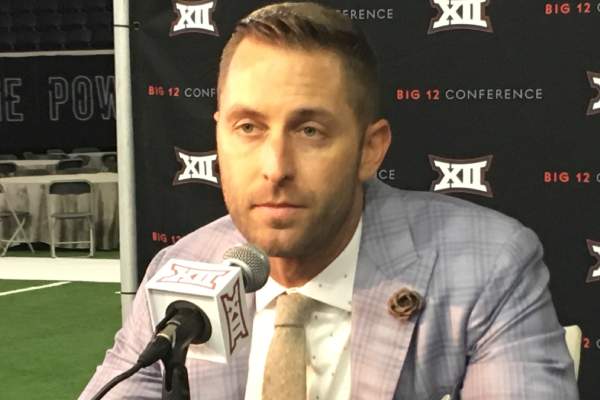 Kliff Kingsbury has not revealed much about his love life. Image Source: Wikimedia Commons.

Kliff Kingsbury, born Kliff Timothy Kingsbury, is a football coach and former quarterback of American nationality. He has been the head coach of the Arizona Cardinals of the National Football League since 2019. Prior to that, Kliff served as a coach in several college football teams. Born and raised in San Antonio, Texas, he played football at high school, college, and on different teams.

Having been called the ‘Bachelor’ of the NFL, people are often curious to know about the sportsman’s love life. But he rarely makes comments about his romantic relationship. However, there have been several rumors about his partner. So, has the NFL coach found someone special? Let’s take a look at this article about Kliff Kingsbury’s wife or girlfriend.

Is Allegedly Dating A Model

As mentioned earlier, because of his secretive nature, the coach’s personal life has been a topic of interest. Just like that, he is allegedly dating a fitness model, Veronica Bielik. It is unknown how the rumor surfaced, but they were first linked in October 2020. Afterward, the speculations of the supposed duo again came when Bielik shared photos of what appeared to be the coach’s home in December 2021.

Back in 2019, the coach asked Rams coach Sean McVay for some sideline passes, and it was later discovered those were for Veronica, whom he had met at that time. The story was later discussed on the Pat McAfee Show in February 2022. Later, he was reportedly spotted in one of her Instagram stories from a farm in Mexico. But, the face of the man could not be seen, so it is not sure if it was actually Kingsbury.

In October 2022, Kliff’s alleged partner sent a reassuring message about the franchise’s situation. While the alleged couple is yet to speak up about the truth, they do follow each other on Instagram. Still, let’s hope we will get to know if Veronica is Kliff Kingsbury’s girlfriend soon.

Prior to the rumors surfaced, the NFL coach was reportedly dating Holly Sonders. It is not known when the couple started dating, but Holly reportedly made their relationship public via social media in January 2019. He was hired as the head coach of the Cardinals, and she took it to Twitter to celebrate his accomplishment. There, she even called him hot.

The desert just got a whole lot hotter.🔥🔥 Congratulations @KliffKingsbury, so proud of you. ❤️ https://t.co/PgNxPmEUC9

Furthermore, Kliff Kingsbury’s then-girlfriend even replied to a few Twitter users saying he is the best. However, the coach never confirmed nor denied the relationship. On the other hand, Holly posted on Instagram that she was proud of Kliff and called him the best human being she knew.

In addition, Holly is a Fox Sports reporter and host. She also previously played golf. With thousands of followers on her Instagram, she often shares pictures of her modeling gigs. Talking about their first meet, the duo met while Holly was working as a sideline reporter for some Big 12 Games, but they never confirmed their dating status.

Unfortunately, the couple is no longer together. While he has been rumored to be dating Veronica, Sonders is in a relationship with boxing legend Oscar De La Hoya.

Currently focusing on his coaching career, Kingsbury must be doing well. We hope we will learn the truth about Kliff and Veronica’s relationship in the coming days. We wish him successful days ahead.