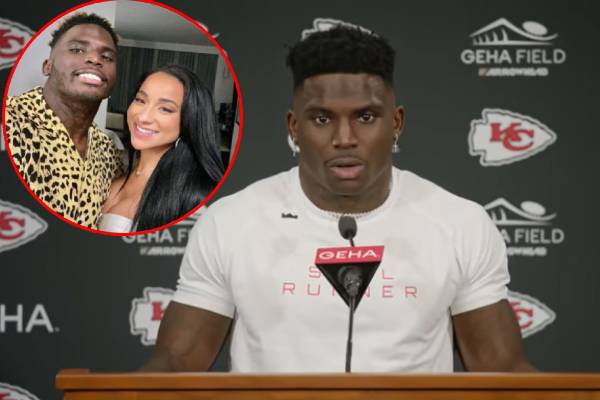 Renowned American football player Tyreek Hill is a wide receiver for the Miami Dolphins of the NFL (National Football League). The talented player was primarily a return specialist as a rookie. However, he has transitioned to strictly playing as a wide receiver.

In reference to his speed, the player has a nickname, Cheetah. Tyreek is professionally active in the league since 2016. With a long career, he has gained a significant amount of fame and massive attention from the public. Thus, today we will talk about Tyreek Hill’s fiancée, Keeta Vaccaro.

Who Is Keeta Vaccaro?

Keeta Vaccaro came into the limelight for being the long-time girlfriend and now-fiancée of the famous football player, Tyreek Hill. However, she is also popular because of her own career and her accomplishments.

Tyreek Hill’s beau is a prominent TikTok star, model, and actress, best known for her viral photos and videos on social media. She was born in February 1996, in Brownwood, Texas, to her father, Ken Vaccaro, and mother, Alesia.

Also, she is the younger sister of Kenny Vaccaro, a famous football safety who played in the NFL, and Kevin Vaccaro. In addition to that, she has one sister, Ashley Vaccaro.

Moreover, Cheetah’s fiancée is very beautiful and she seems to have grown up with a lovely childhood. Keeta is very active on her Instagram and Twitter accounts and often posts pictures related to her business. Additionally, she is very popular and influential among her fans.

Have Been Together For A Few Years

The talented player and his then-girlfriend, Keeta, got engaged on 04 July 2021. The couple has continued to enjoy their engagement and might share the details about their wedding date very soon.

Furthermore, the lovely pair were dating for a while and they made their romance official in December 2020 through an Instagram post. However, they deleted the post after a short time and haven’t shared any pictures ever since. The pair must have wanted to stay away from any social media scrutiny.

Although Tyreek Hill and his soon-to-be-wife have not shared any details about their romance, the love birds are happily together, and their relationship seems to be solid and strong.

Aforementioned, Tyreek’s partner was born and raised in Brownwood, Texas. After finishing high school at Brownwood High School, she joined the University of Miami in 2016 and graduated in 2019. She earned her bachelor’s degree in entrepreneurship and marketing.

Moreover, Tyreek Hill’s partner is a well-established social media influencer with a massive fan following. Apart from that, she is also a co-founder of several organizations like “1996 the label” and Misurare by Vaccaro. Also, her sister, Ashley is her business partner.

In addition to that, Tyreek Hill’s fiancée is a licensed real estate broker and sales agent. Also, she seems to be involved with MK Capital, a multi-faceted boutique investment firm that specializes in real estate, food, and blockchain.

Furthermore, Cheetah’s soon-to-be-wife is currently working as a part-time creative director at Deal Raise. Besides, according to her LinkedIn, she is also working as a full-time digital marketing manager at Apex Project since January 2020.

Keeta’s Boyfriend Is A Father Of Three

Before finding love with Keeta, Tyreek Hill was in a relationship with Crystal Espinal, an American businesswoman, from 2014 to 2018. The former couple’s bond seemed so strong that no one expected their break up in such an unpleasant way.

Tyreek and Crystal were also engaged. However, their relationship didn’t last long, and the former couple parted their way in 2018. During their time together, the ex-pair welcomed three children, a son, Zev Carter Hill, and twins, Nakeem Hill and Nyla Hill. Tyreek hill’s son, Zev, was born in 2015 as the firstborn to the player and his former partner, Crystal.

Furthermore, when Crystal was carrying Zev Carter in her womb, police arrested Tyreek Hill on complaints of assaulting her. As reported by And Scape, Keeta’s fiancé got into an argument and threw his ex-girlfriend, who was pregnant, like a ragdoll and punched her in the stomach, and also choked her.

At first, Hill denied the accusation but eventually pleaded guilty and went through three years of probation and an anger-management course. He was also ordered to go through various domestic-abuse evaluations and programs.

Moreover, in 2017, Crystal filed a petition to prove that Tyreek was the father of her twins, whom she gave birth to in 2019 after they broke up. The petition was filed to establish supervised parenting time and child support payments. In addition to that, the football player was also placed under investigation for abusing his son, Zev, when he was just three. However, the case was closed as there was not enough evidence.

Regardless, the wide receiver must have changed, and he must be raising his children well. Additionally, his now-partner might also have a great bond with his children.

Nevertheless, Keeta Vaccaro is a beautiful woman with a creative mind and has achieved a life many dream of living. Likewise, we wish Tyreek Hill’s fiancée a lasting relationship and happy life ahead.