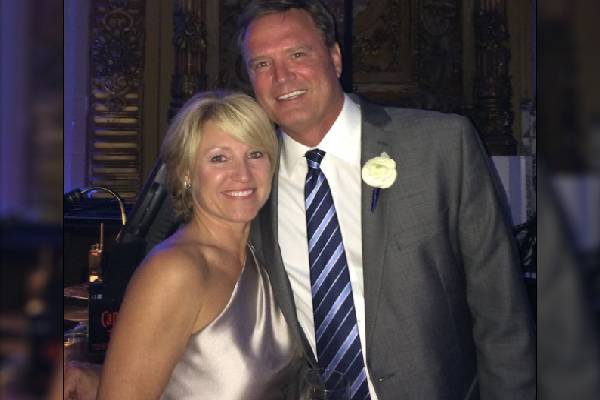 Bill Self and his wife Cindy Self have been together since 1988. Image Source: Cindy Self Facebook.

The basketball team of the University of Kansas, Kansas Jayhawks, reached the 2022 NCAA Final Four. All the team players with their head coach, Bill Self, are having a blast and working hard to win the final. Bill has been the head coach of the Jayhawks since 2003.

Born Billy Eugene Self Jr., Bill is one of the best college coaches. He has won the Big 12 Coach of the Year honor six times. Moreover, Self has gained massive recognition with a long coaching career. Owing to his fame, his family members have also come into the limelight.

Thus, today we will be talking about Bill Self’s wife, Cindy Self.

Who Is Cindy Self?

Cindy Self also known as Cindy Kelly Self, is famous as the wife of Kansas Jayhawks’ head coach, Bill Self. She was born in Oklahoma City, Oklahoma.

Talking about her husband, he also attended Oklahoma State University and majored in athletic administration.

Cindy and her husband, Bill were college sweethearts and both of them attended the same university. The Self couple met in the mid-eighties. During their college days, Cindy was a cheerleader. Meanwhile, her husband was a basketball player for the university’s men’s basketball team.

After dating for about four years, the couple walked down the aisle in 1988. Since then, the pair have been together and are leading a comfortable life with their two kids.

Currently, Cindy Self lives in Lawrence, Kansas, along with her husband. The couple seems to have a strong bond and affection for each other.

Bill Self’s Wife Is A Big Supporter Of His Career

As Cindy and her husband met even before they started their professional career, she stood by her husband’s side throughout his journey. During Bill’s journey from a college basketball player to assistant coach to the head coach, Cindy proved herself to be one of the most supportive partners.

The Kansas coach also proudly admits that his spouse is one of the reasons for his success. Moreover, Bill Self’s wife, Cindy Self, is very involved in the crowd of Kansas. Each year Kansas Jayhawks create a lot of thrill in the NCAA Tournament. During the broadcasting of Jayhawks games, Bill and his partner appear many times on the screen.

However, Bill and Cindy have also been subjected to the rumor mill. Back in 2013, a rumor of Bill Self seeing another woman in the neighborhood of Lawrence spread. Moreover, it was reported that Cindy threw her husband out of their home.

Well, whether the rumors have any truth to them is unknown, but it is normal to face problems in a relationship. The Self couple seems to be one of those few people who make their relationship even solid by overcoming their problems together.

Is A Big Part Of A Non-profit Foundation

In 2006, Bill and his wife established a non-profit organization, the Assists Foundation. The foundation was established to promote the wellness of the youth, particularly those with obesity and diabetes.

Apart from the foundation, Bill’s wife is also on a Gingerbread committee and advisory board member of Big Brothers and Big Sisters. In addition to that, she is also the annual campaign chair of the Lawrence Schools Foundation.

Several other organizations and individuals have been benefited from the Self couple’s generosity. Let’s hope the pair will continue to showcase their generosity more in the coming days.

Cindy and her husband have been together for more than three decades, and the duo is leading a happy family with their beloved children, Tyler Self and Lauren Self.

Cindy and Bill Self’s daughter, Lauren Self, is her parents’ eldest child. She has been married to Hayden Browning since 2014 and has two children, Ella Browning and Phoebe Browning. So with that, Cindy and her husband, Bill, have another title, grandparents.

Tyler Self was born as the youngest kid to Cindy and her husband, Bill Self. As he was born into a basketball family, he also developed a fondness for basketball and was an active player throughout his days at the University of Kansas.

However, Cindy Self’s son quit basketball and earned his MBA degree from the University of Kansas School of Business. Currently, he works as the general manager for the G-League team Austin Spurs.

Nonetheless, Bill Self’s wife, Cindy Self, is an amazing woman with a big heart. She is a woman, wife, mother, and grandmother. We wish to hear more of her story. Moreover, we wish her a wonderful life filled with happiness and joy.