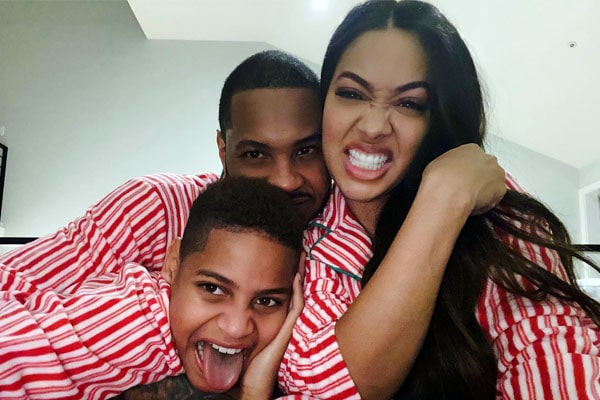 The television personality La La Anthony and the pro-basketball player Carmelo Anthony are achieving success in their related career paths. Besides gaining wide popularity, La La and Carmelo are making millions of dollars from their respective professions. Together they are a financial power station.

Let’s find out about their earning source and salaries from their respective line of works here.

As hinted above, the beautiful television personality La La Anthony is worth multi-million dollars. Besides her television appearances, she is making millions from her diverse career paths, including her position as a producer, beauty entrepreneur, and many more. So, how much is she making from them all?

Earnings From Her Career In The Film Industry

The maximum percentage of La La Anthony’s net worth comes from her career in the American Entertainment Industry. She is an established TV hostess, actress, and producer at the moment, having worked in numerous TV shows, radio programs, and films.

Moreover, as an actress, La La Anthony has performed in several films and TV shows, from which she has earned tons of dollars. Some of the films in which La La appeared and their box office collection are as below:

Income From Her Cosmetic Line And Other Ventures

Besides earning from her career as a producer, actress, and host, La La Anthony also earns from her cosmetic and clothing line. She teamed up with Motives by Loren Ridinger to launch her cosmetic line in February 2012. Similarly, La La began her clothing line in 2013.

Some clothing and beauty collections by La La Anthony with their prices are listed below;

Apart from these, La La Anthony adds some money to her bank balance from selling her books. She is an author of a couple of books, including The Love Playbook (2014) and The Power Playbook (2015). The hardcover version of her first book costs $18.28, while the latter one’s cost is $16.98.

So, La La Anthony’s involvement in diverse business sectors is helping her to earn a substantial sum of money and enjoy a luxurious lifestyle.

Carmelo Anthony Net Worth And Earnings

While La La Anthony is bagging millions of dollars from multiple ventures, her estranged husband, Carmelo Anthony, is making almost three times more money than her. Though his main source of income is his career as an NBA player, he is also engaged in various other business lines.

So, take a look at how much Mr. Anthony earned from his NBA salary alone and what are his other sources of earnings.

Earnings As A Pro-Basketball Player

Like many other professional basketball players, Carmelo Anthony makes millions from the salaries and endorsements he gets from his contract with different basketball teams. His first play as an NBA player was with the Denver Nuggets, which he joined in 2003 and stayed till 2011. After that, he played for New York Knicks, Oklahoma City Thunder, Houston Rockets, and currently plays for Portland Trail Blazers.

To date, Carmelo Anthony reportedly earned around $260 million from his NBA salary alone. Though his initial salary from Nuggets is not available, his contract with the team after the 2005-06 season was worth $80 million over five years. However, he terminated the deal after the fourth year and joined New York Knicks.

Carmelo Anthony’s earnings from his contract with different basketball teams are mentioned below.

Income From Various Other Sources

Besides earning from NBA, Carmelo Anthony earns from various other sources. He makes some money by guest-starring in TV shows, appearing in music videos, and being featured on magazine covers. Also, he receives payment from various shoe deals and partnerships in various business ventures.

In 2003, Carmelo signed his first shoe deal with the Jordan brand and received $3.5 million per year till 2009. Similarly, he partnered with the auto racing team Hemelgarn Racing in 2016 to campaign a car driven by the race car driver, P. J. Chesson.

Moreover, Anthony is the owner of the North American Soccer League expansion club Puerto Rico FC since 2015. In 2018, with a plan to roll the chain out to many locations nationwide, he led a $5 million investment round in Nobody’s Pizza.

While Carmelo Anthony was playing for Denver Nuggets, and the real estate market was at its peak, he bought a 21,000 sq. ft. mansion in Denver for $12 million in 2007. However, three years later, Anthony listed it on sale for $9.5 million. Eventually, with a loss of nearly $6 million, he sold the home for $6.2 million.

Later, in 2015, Carmelo Anthony spent $11 million for a new five-bedroom condo in NYC. But, after five years, he listed this property for sale with a price tag of $12.85 million.

Carmelo Anthony dealt with various controversies in the past, like marijuana possession and traffic violations. Also, NBA suspended him for 15 games in 2004 for being involved in the infamous Knicks-Nuggets brawl. It resulted in the loss of his career as well as thousands of dollars for some period.

Similarly, Anthony paid $1000 in court costs and fines in 2008 for pleading guilty to a charge of driving while being legally intoxicated.

Both La La And Carmelo Anthony Are Engaged In Philanthropic Works

The former couple, La La Anthony and Carmelo Anthony are active in philanthropic works. La La Anthony is the founder of La La Land, Inc. Foundation. She founded the organization to make a difference in the inner-city kids’ lives by providing better opportunities and schooling that they might not afford.

Similarly, Carmelo Anthony involves himself in several charity works and contributes millions of dollars for the betterment of children, youth, and needy peoples. Some years ago, he donated $1.5 million to a non-profit organization, Living Classrooms Foundation, which works for youths, children, and adults in the East Baltimore community.

Moreover, Carmelo donated $35K to relief efforts after the 2004 Indian Ocean Earthquake caused a tsunami in Indonesia. Also, he contributed $3 million toward the construction of a basketball practice facility at Syracuse University. ‘The Giving Back 30 List of Largest Charitable Donations by Celebrities in 2016’ listed Carmelo as number eight on the list as his charitable contributions were $4,282,000 that time.

La La Anthony and Carmelo Anthony have been in a marital relationship since 2010. Moreover, they have a son, Kiyan Carmelo Anthony, whom they welcomed on 7 March 2007. However, it seems like the two are not happy with their married life. Recently, La La filed for divorce from Carmelo Anthony, citing irreconcilable differences. The petition came after the pair separated, reconciled, and then separated again.

There have been no reports of any alimony, but nevertheless, they say it’s amicable.

Nevertheless, Carmelo Anthony and La La Anthony are earning millions individually. Both are gaining stardom, along with adding multi-million to their net worth. Though the power couple is on the verge of ending their marriage, we hope they find happiness again.