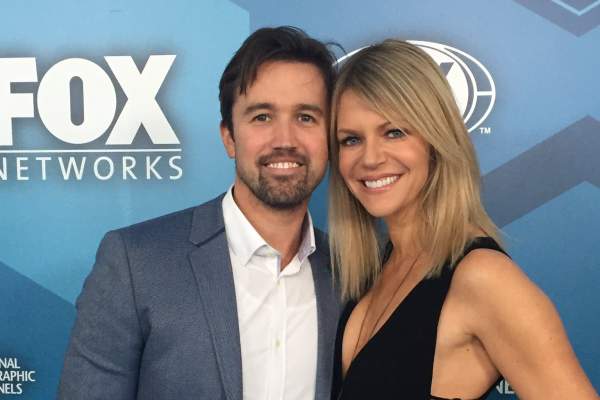 The latter is a nominee for the 74th Primetime Emmy Awards for Outstanding Guest Actress in a Comedy Series for her portrayal of DJ in HBO’s comedy series Hacks. In addition, the celebrity couple has amassed massive wealth from their successful careers in the entertainment industry. So, let’s look into the pair’s net worth and their sources of income in this article.

Rob McElhenney Net Worth And Earnings

The 45-year-old actor has been active in the entertainment industry since 1996. Throughout the years, he has written, acted, produced, and directed various TV series and movies. Thus, he must have collected a lot of money in his career. As per Celebrity Net Worth, Rob McElhenney’s net worth is $50 million. So now, let’s break down and look into his earning sources.

Although his role was cut out of the final edit, Rob had his first major acting role with a minor part in the 1997 film The Devil’s Own. He continued to play small parts in the movies A Civil Action, Wonder Boys, and Thirteen Conversations About One Thing. Later, he earned more significant parts in the films Latter Days and The Tollbooth and a guest role in an episode of Law & Order.

Since then, the 1977-born actor has played various roles in numerous movies and TV series. Now, let’s take a look at the box office of some of the movies McElhenney has appeared in.

Considering the financial success of the movies he has appeared in, Rob must have received fair pay for his contributions. Also, as per Comparably, a TV actor’s salary ranges from $18,902 to $504,331. Being one of the talented and renowned actors, Rob McElhenney must earn way more than the average amount.

Aside from being an actor, the 45-year-old is also a director, writer, and producer. He has about 4 credits for directing,17 for producing, and about 8 for scriptwriting. As mentioned above, Rob created and co-developed It’s Always Sunny in Philadelphia. In addition, he also served as an executive producer, co-writer, and occasional director for the series.

Likewise, McElhenney is a co-creator, writer, executive producer, actor, and director of the comedy series Mythic Quest. Furthermore, he is also a businessman and co-founded Adim, a new entertainment-tech company. Moreover, McElhenney and actor Ryan Reynolds formed a business partnership and purchased the Welsh football team Wrexham AFC after receiving the backing of the Wrexham Supporters Trust.

Rob must be earning quite a lot of money from his multiple roles in the movie industry. Also, he must be making a massive sum of fortune from his business partnership with Ryan Reynolds. Considerably, Rob McElhenney’s net worth being $50 million is no surprise.

Kaitlin Olson Net Worth And Earnings

Olson has been active in the film and television industry since 2000. Being an actress, Kaitlin Olson’s net worth is mainly influenced by her acting career. The 46-year-old has made guest appearances in numerous projects, including Curb Your Enthusiasm, The Drew Carey Show, Family Guy, and many more.

Kaitlin had a break-out role when she was cast as Deandre “Sweet Dee” Reynolds in the sitcom, It’s Always Sunny in Philadelphia. In addition, she had a cameo appearance as a Bulgarian druggie in the 2013 film The Heat. She also voiced Ethel in Brickleberry and Destiny in Finding Dory. The actress starred and served as an executive producer in the sitcom The Mick.

Now, let’s look at the box office collection of some of the movies Kaitlin Olson has appeared in.

The blonde beauty must have earned substantial income featuring in such commercial hits. Furthermore, as per Vanity Fair, the 2022 Emmy nominee was paid $1 million for a Quibi special. According to Celebrity Net Worth, Kaitlin Olson’s net worth is $50 million, a combined net worth with her spouse, Rob McElhenney. Well, she is still active, and her career is ongoing. Hence, it is highly likely that her wealth will increase.

Rob McElhenney and Kaitlin Olson have been married since 2008. The pair share and are doting parents to their sons, Axel Lee McElhenney and Leo Grey McElhenney. The couple can enjoy a lavish and comfortable life with their kids, thanks to their huge net worth. For instance, they purchased a home in California for $2.1 million in 2008.

However, the husband-wife duo sold the mansion in 2018 for $2.5 million. In addition, in 2009, they also bought “Skinner’s Bar” in Philadelphia and renamed it “Mac’s Tavern.” Nonetheless, the couple appears to be leading a happy life with their little ones. Since both Rob and Kaitlin’s careers are ongoing, we wish more fame and fortune to the couple.