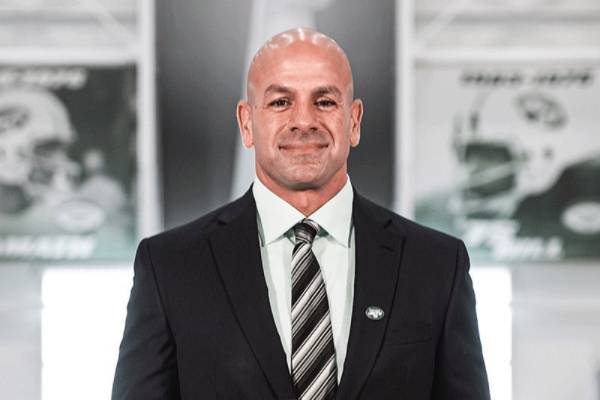 Robert Saleh's Net Worth has improved tremendously ever since joining the NFL. Image Source: The New York Jets Instagram.

Renowned for his quick defense techniques, determination, and coaching skills, Robert Saleh is the first-ever Muslim to become an NFL head coach. Saleh formerly served as an assistant coach for the Houston Texans, Jacksonville Jaguars, Seattle Seahawks, and San Francisco 49ers. He presently works as the head coach for the New York Jets.

Aside from the love and admiration of millions, the NFL head coach has amassed enormous riches from his career. So, how much is Robert Saleh’s net worth? Why don’t we look for the answers in the article below? Stay with us to the end to find out where the football coach gets his money and how he spends it.

Robert Saleh Net Worth and Earnings

According to sources, Robert Saleh earns $5 million yearly as head coach. So, why don’t we look at his earnings and salary details to find out how the NFL coach makes millions.

Like many respected coaches, Saleh began his coaching career at the base as a college coach. He served as the defensive assistant for Michigan State University from 2003-2004. Then he worked for Central Michigan University and the University of Georgia in 2004 and 2005, respectively.

Slowly, the Michigan native started gaining recognition and made his way to the NFL. Still, a college coach makes an average of $38,043 per year, so it is reasonable to believe that Robert Saleh’s net worth must have improved tremendously from his coaching career.

Robert Saleh’s Salary From Coaching In The NFL

After coaching university teams for four years, the Houston Texans hired him as an intern in 2005. In January 2009, Saleh got promoted as the assistant linebackers coach and remained with the Texans until 2011, when the Seattle Seahawks hired him.

With the Seahawks, Robert worked as the defensive quality control coach under Pete Carroll. The coach spent three seasons with the team and even led the team to the Super Bowl XLVIII victory in 2013.

Following the Seahawks’ 2013 championship victory, the Jacksonville Jaguars appointed the NFL coach as their linebackers coach under head coach Gus Bradley. However, their time together was brief as Saleh joined the San Francisco 49ers on February 13, 2017.

With the 49ers, he worked as the defensive coordinator under Kyle Shanahan. The team thrives under Robert’s guidance, and he even led them to the Super Bowl LIV berth. Unfortunately, the Kansas City Chiefs defeated them.

Robert Saleh then signed a five-year contract to become the head coach of the New York Jets on January 14, 2021. However, the contract details and his salary have not been made public. The head coach has had many ups and downs as a first-year head coach. Also, in his first year with the team, Saleh has already pocketed $5 million as per NBCSports.

Still, there is no doubt that with time, the NFL coach will make a name for himself as one of the prominent coaches in NFL history. Similarly, while he has received the recognition he deserves, Tomlin’s fortunes must have improved substantially since joining the NFL.

The New York Jets head coach is one of the finest in his profession, having worked in the NFL for decades. Thanks to his dedication and devotion to the game, he has amassed a multi-million dollar fortune. So, with Robert Saleh’s net worth in the millions, it’s no wonder that he lives a wonderful life.

However, he has encountered some hurdles along the way. In November 2021, Robert Saleh filed a lawsuit against a home building company for shoddy renovation work and deceptive billing. According to reports, the New York Jets head coach recruited New Jersey designers and workers to refurbish his $2.9 million Morristown home.

The NFL coach made it clear to the designers that he wanted the house finished by September 2021. However, upon returning, he found the home in an unfinished state. Upon investigation, it was discovered that the football coach had paid the contractor $146,215 for goods worth approximately $29,000. In addition, he had individually paid the designers $87,367.

However, whether or not the football coach received the money owed to him is unknown. Nevertheless, the Saleh family employed new contractors to finish their home. So, let us hope that he gets the desired outcome this time.