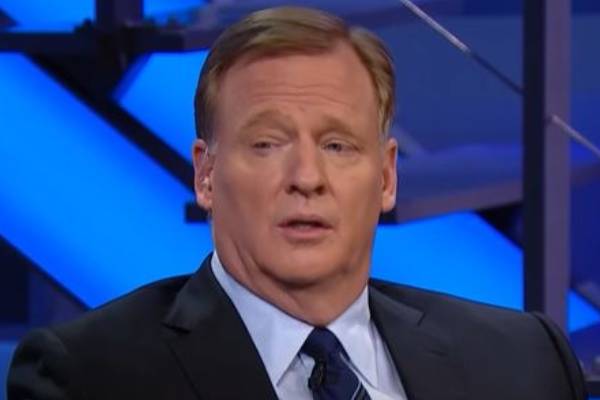 Roger Stokoe Goodell, also known as Roger Goodell, is a businessman hailing from New York, USA. In August 2006, he was appointed as the National Football League Commissioner, succeeding the retired Commissioner Paul Tagliabue. Since then, he has been serving in his position and is considered one of the most influential personalities in the sports industry.

While he has gained fame and success in his professional career, his net worth and earnings have become a topic of interest for many sports fans. So, how much has the NFL Commissioner earned in his career? What are his income sources? Hence, in this article, let’s find out about Roger Goodell’s net worth and earnings.

Roger Goodell Net Worth And Earning

Taken as one of the most powerful personalities in the NFL world, Roger has gained success and fame in his professional career. So, there’s no doubt if someone says he has considerable wealth. Indeed, he has; as Celebrity Net Worth reports Roger Goodell’s net worth is estimated to be $200 million.

So, how did he amass such a massive sum of money to his name? What are his earning sources? Let’s find out further.

Has Been Working As The Commissioner Since 2006

Roger began his NFL career in 1982 as an unpaid administrative intern in the league office. He briefly joined the New York Jets as an intern but eventually returned to the league office in 1984. Three years later, in 1987, he was appointed to work as the assistant to the president of the American Football Conference.

Roger worked in different roles under Paul Tagliabue for more than a decade. And in 2001, he was appointed as the Chief Operating Officer and Executive Vice President of NFL. During his tenure as COO, he became the most important person in the creation of the NFL Network and the collective bargaining agreement. After Paul retired, he was voted in as the next NFL Commissioner.

During the election to select the Commissioner, Roger and Gregg Levy were the only candidates to gain votes in the second and third ballots. During the fourth ballot, he increased his lead, and in the fifth round of voting, he gained the majority of votes. On August 8, 2006, he was chosen as the NFL commissioner succeeding Paul.

Also Read: Know About Craig Wright’s Net Worth And Earnings

After getting appointed as the NFL Commissioner, Roger has earned a generous amount in salary. With the passing years, his salary seems to have increased. As a result, Roger Goodell’s net worth has grown significantly over the years. Here’s the salary that Roger received in different years.

According to Celebrity Net Worth, Roger has earned $492.7 million in salary alone from 2007 to 2021. Moreover, he earned $45 million in total compensation (salary and bonuses) in an average year. According to New York Times, he was paid almost $128 million for the two fiscal years, 2019-20 and 2020-21. Because of that earnings, he became one of the highest-paid executives in the nation. Furthermore, during those fiscal years, he earned $63,900,050 annually.

Similarly, USA Today reported that 90% of the pay Roger received was in bonus alone. The earnings also include media contracts worth over $100 billion and a 10-year deal with the players.

Talking about his contracts, in 2017, Roger signed a five-year contract, which is reportedly worth up to $200 million. The deal went into effect in 2019, which means he will be earning the sum until 2024. While signing the contract, he pushed for $50 million annual earnings and the use of the NFL’s private jet for a lifetime for him and his family.

Well, this five years deal will help him pocket more money. As a result, Roger Goodell’s wealth will increase in the coming days.

As mentioned earlier, Roger Goodell’s fortune is estimated to be $200 million. With a staggering net worth like that, there’s no doubt that he lives a comfortable life with his wife, Jane Skinner, and two daughters. He currently resides in Bronxville, New York, with his family.

The house that the NFL commissioner resides in is reportedly worth more than $4.1 million. According to public records, he bought the home in September 2005 for $4.8 million. Moreover, Roger also had an apartment in Manhattan Upper East Side, which he sold in 2007 for $2.72 million. He had purchased the house in 1996 and initially listed it for $2.8 million.

As Roger is still active in his profession, one cannot doubt that he will earn significantly over the years. Nonetheless, let’s hope Roger Goodell’s net worth increases considerably over the years so he can continue to live a comfortable life.