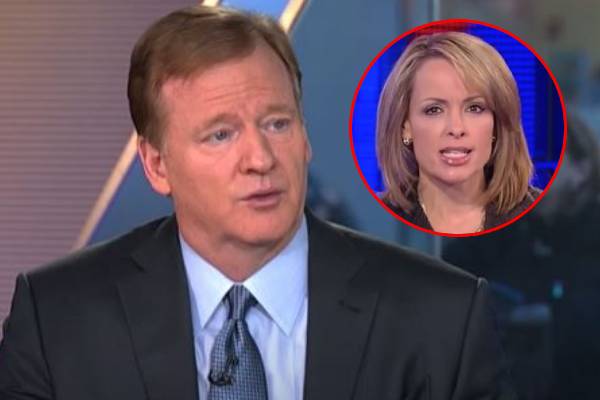 There are several people involved in NFL, including players, coaches, commissioners, and team managers. Many of them have gained significant success and have established themselves as one of the prominent personalities in NFL history. One such name is Roger Goodell, who currently serves as the Commissioner of the National Football League. Goodell is regarded as one of the most powerful men in the sports industry.

There’s no doubt in saying that Roger has gained significant fame because of his profession. But even if he has earned massive fame to his name, he keeps the details about his personal life under the wraps. Goodell has not disclosed much about his life, but we know that he is a doting father of two daughters he shares with his wife, Jane Skinner. Besides that, fans are curious to know more about their lovelife.

Thus, in this article, let’s learn in detail about Roger Goodell’s wife with her five interesting facts.

Comes From A Political Family

Roger Goodell’s wife, Jane Skinner, comes from a political family. She is one of the three children of Samuel Knox Skinner, also known as Sam Skinner, and his first wife, Susan Ann Thomas. Jane’s dad previously worked under President George H. W. Bush as Secretary of Transportation and White House Chief of Staff.

Similarly, Jane’s elder brother, Thomas Vernon Skinner, previously worked as the head of the US Environmental Protection Agency’s national compliance program. Likewise, he served as the director of the EPA’s region 5 and currently works as the general counsel of Louisiana State University.

Furthermore, Jane Skinner’s second brother, Steven Knox Skinner, is involved in the business world. He is the CEO of KemperSports, a privately owned company managing over 100 golf courses in the US. Coming from a political family, Jane must have been interested in politics, but she did not follow in her dad’s footsteps.

Marital Life Of Jane And Roger

As mentioned earlier, the NFL Commissioner, Roger Goodell, shares a blissful marital life with Jane Skinner. Roger and Jane wedded on October 25, 1997. However, the married duo has kept their marital life under the wraps and has not disclosed much information about their wedding day. The couple dated for four years, and other than that, not much has been revealed about Roger and Jane’s courtship.

It already has been over two decades since Roger and Jane tied the knot. And in all these years of being married, they completed their family by welcoming twin daughters. Roger Goodell’s wife, Jane, gave birth to their children in 2001. Like their marital life, the pair have not revealed much about their kids, and even their names and faces have not been revealed yet.

Moreover, through different interviews that both Jane and Roger have given, it has been discovered that the Goodell twins are interested in sports. Furthermore, one of Jane’s daughters was interested in attending Elon University.

Well, Jane and Roger must be having a wonderful time with their daughters.

The NFL commissioner, Roger Goodell’s spouse, Jane Skinner, has a long broadcasting career. She attended Northwestern University and graduated with Bachelor’s and Master’s degrees in Broadcast Journalism. She began her career as a political correspondent for KBJR-TV (NBC) in Duluth, Minnesota. Before joining Fox News, she worked at many other television networks.

Roger’s partner, Jane, served as the prime-time anchor for WITI-TV (Fox) in Milwaukee. Moreover, she also served as a general assignment reporter for WCSH-TV (NBC) in Portland, Maine, and KMO-TV (CBS) in St. Louis.

Then, in 1998 Jane joined Fox News Channel (FNC) as a general assignment reporter. She used to work as a regular anchor and even co-hosted the show Happening Now with Jon Scott. Moreover, she also hosted several other shows, including Fox Report with Jon Scott, Studio B, Shepard Smith Reporting, and Bill Hemmer Reports.

Jane worked in Fox for 12 years, and she had a successful broadcasting career. In addition, she must have earned a significant amount of wealth from her profession.

Jane Left The Network For Her Family

After working with the Fox Channel for 12 years, Roger Goodell’s wife, Jane Skinner Goodell, ended her career. In June 2010, Jane announced on-air that she was leaving the network. During her last day on-air, she informed the viewers that it would be her final day at the network, and she was taking a break from the business.

While announcing her departure from the network, Jane mentioned that it was a thrill to be a part of the incredible success of that place for over the 12 years that she has been there. She stated that the time she spent there had changed in wonderful ways and had created many new responsibilities.

Moreover, Jane also revealed that she was departing to look after their twin daughters, as Roger, who had started to work as the NFL commissioner, had a job even busier than her. According to The List, in 2019, she returned to the television world as a producer. She worked as a producer on a documentary, A Lifetime of Sundays.

Talking about her husband, Roger Goodell’s net worth, it is estimated to be $175 million. With a fortune like that, the husband and wife must be enjoying their wonderful time together.

Being a celebrity figure, it is common that you receive immense love and support and sometimes hate too. Just like that, Jane Skinner’s husband Roger Goodell also received backlash from the fans some time ago, and she did not sit back to defend her spouse.

In fact, in 2017, Jane made a fake Twitter account in order to defend her husband. Through the account, she called out the journalist who criticized her beau’s decisions. Furthermore, she attempted to clarify news stories which she claimed were false. Jane also interacted with erratic fans. The Wall Street Journal exposed her fake account.

Nevertheless, Roger Goodell’s partner must be doing great for herself and must be living a joyful life.