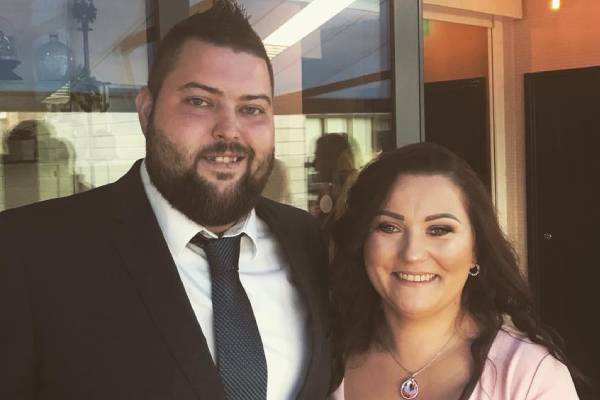 Michael Smith is a professional darts player hailing from St. Helens, England, who currently plays in Professional Darts Corporation (PDC) events. In 2013, he won PDC Under-21 World Championship, and since then has won eight titles on the PDC Pro Tour. In January 2023, he was crowned World Darts champion in one of the most remarkable matches, where he defeated Michael van Gerwen.

Because of the fame and prominence that Michael has gained, fans of him are curious about his personal life, especially his love life. Well, he shares a blissful marital life with Dagmara Malczewska. And in this article, we will be learning about Michael Smith’s wife and their lovelife.

As mentioned earlier, the famous dart player Michael Smith is happily married to Dagmara Malczewska. The lovebirds have been together for several years now. However, it has not been revealed when they met. Many sites have mentioned that in 2014, he proposed to Dagmara. However, in 2017, she tweeted about her proposal with a photo of a heart-shaped rock that said “Marry Me?” and “Mike+Dag.”

Dagmara said Yes! and exclaimed that she was the happiest girl on the planet. Nevertheless, the couple exchanged their vows on January 5, 2019. She shared the news on her Twitter by uploading pictures of their ring and said, “We did it!”

In an interview, Dagmara Malczewska’s husband had talked about their wedding preparation. While talking to the article, he mentioned that his partner had planned everything from the wedding dress to his suit, the honeymoon in the Dominican Republic, and the table decorations for the wedding celebration. He further mentioned that she even moved the starting of the church wedding an hour to one o’clock during their wedding afternoon.

Furthermore, Michael Smith explained that the only thing that he had to do was the payment. The couple’s marriage has since then only grown stronger. Michael Smith’s wife, Dagmara, often gushes about their relationship and does not back off to share their love for each other via Twitter or other social media pages.

Let’s hope the duo’s marriage remains the same and have a joyful life ahead.

Michael Smith’s Wife Is A Doting Mother Of Two Kids

Three years later, on September 18, 2017, she gave birth to their second son, Kasper Alexander Smith. Dagmara and her husband shared the news of their baby’s arrival via Twitter. It was back in March 2017 when Dagmara’s husband Michael had shared the news of pregnancy by tweeting a photo of the ultrasound. He had captioned the picture saying the reason for all the hard work he did that year and got himself back where he should be was the arrival of their second baby.

Similarly, Dagmara also shared the pregnancy news by sharing the ultrasound photo. Nevertheless, the couple is raising their kids with immense love and care.

Furthermore, the pair also have dogs, with whom both the kids are really close. The children are supportive of Michael and often watch their dad play and win. Let’s hope the Smith family has great times ahead.

Michael’s spouse is also involved in her own business. She makes resin products for custom orders and sells them through the page MiKas – resin art. She has a Facebook and Instagram page to sell her products. However, the price of the products has not been revealed yet.

Nevertheless, Dagmara must be doing great in her business, and many of her customers seem to have loved her products.

Like him, Michael Smith’s wife, Dagmara, also plays drafts at a regional level. However, there is not much information about her playing career. Who knows, darts might be the reason the couple got together. Moreover, Dagmara often appears at several darts events to support her husband. Even if she is not able to attend, she shows her support through her social media page.

Dagmara seems to be doing great in her work. She is active on her social media page. Plus, let’s hope Dagmara succeeds at her work.