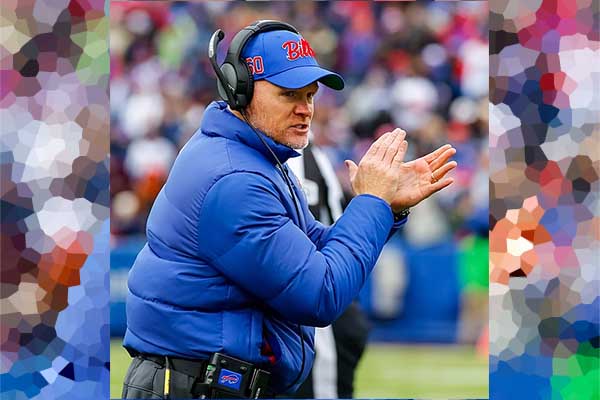 Sean McDermott isn’t a new name in the sports world. He has served as a coach for more than two decades in the National Football League (NFL). Moreover, he has led an impressive coaching career with many victories and championship wins.

The sportsman began his NFL career with Philadelphia Eagles in 2001. He was initially assistant coach before climbing up the ranks in the team. Finally, the mentor has now become the head coach of Buffalo Bills. He is credited for improving the gameplay of the football team.

NFL has been known for their heavy paychecks for both players and coaches alike. So, how much has McDermott earned from his coaching tenure; is his income impressive like his coaching records? Here, we will go through Sean McDermott’s net worth and look at how much salary he pockets as an NFL coach.

Sean McDermott Net Worth And Earnings

The sportsman was a star athlete in his academic years. He later transitioned from actively playing to guiding other players in the field. He hasn’t looked back since embarking on his coaching journey.

Alongside fame, the athlete has earned a considerable sum. Although he hasn’t been so forthcoming about his income and paychecks, they must be worth millions of dollars. Hence, Sean McDermott’s net worth is heavily influenced by his coaching career.

Also Read: Learn How Much Is Joe Judge’s Net Worth

As mentioned earlier, Sean was a footballer during his school years. He played quarterback and safeties at La Salle College High School before switching to defense at the College of William and Mary. In addition, he was a national prep wrestling champion in 1992 and 1993.

After graduation, the player served as a graduate assistant at his alma mater. He soon moved to be a scouting administrative coordinator for Philadelphia Eagles in 1999. Finally, he was promoted to be assistant to former Eagles head coach Andy Reid in 2001.

The W&M alumnus became a defensive quality control coach only after a year. He slowly climbed up the ranks and served as an assistant defensive backs coach, secondary coach, linebackers coach, etc.

McDermott’s notable result was winning the 2004 NFC Championship Game, leading the Eagles to Super Bowl XXXIX, etc. He was then moved to be defensive coordinator and secondary coach in 2009. He held the position before being fired after the 2011 season.

The former Eagles coach joined Carolina Panthers as a defensive coordinator in 2011. Under his guidance, the NFL team finished in the top-10 defenses from 2012 to 2015. In addition, he led them to advance to Super Bowl 50.

The NFL coach hasn’t revealed his earnings while serving the Eagles and Panthers. Still, as per ZipRecruiter, the average pay of a defensive coordinator is $22 an hour and $46,664 a year. So Sean McDermott’s salary must have been more than the range, considering his experience.

The sports personality’s outstanding performances had earned attention from many NFL teams. Buffalo Bills took the initiative to offer him a head coaching job in 2017. He agreed and signed a five-year-long contract with them.

The head coach changed the Bills playing tactics and rebuilt the team. He led them to make a playoff appearance on his first season, ending the eighteen-year playoff drought. In addition, he assisted them to another NFL playoffs and recorded 25-23 in three years.

Bills offered Sean a contract extension through 2025 in November 2020. However, both parties haven’t revealed the financial terms of the contract. Still, Espn states the NFL coaches’ salary falls between $4 million and $12 million, with some earning up to $15 million.

HC Sean McDermott has signed a multi-year contract extension with the @BuffaloBills. pic.twitter.com/l18rivyx3E

As the head coach has shown impressive results with Bills, he must also get a hefty paycheck. So, Sean McDermott’s salary must be worth millions of dollars.

Thus, Sean McDermott’s net worth must be a notable amount from his coaching career.

The Buffalo Bills coach has led a successful coaching career for more than twenty years. His dedication to his job must have also benefitted him financially. With his hard-earned money, he must undoubtedly enjoy a comfortable life with his family.

Similarly, McDermott must have invested his earnings in buying homes or properties. For instance, he purchased a house at Woodstream Trail, Orchard Park, on May 24, 2017.

The sportsman purchased the home from Woodstream Trail LLC. He paid $998,500 for the villa and has been living there since with his wife, Jamie McDermott, and their children. Although he hasn’t shared many details, his house must be beautiful with many features, considering the price.

Likewise, Sean might own other real estate in several places. He might also possess high-branded cars or vehicles. With his increasing fortune, he might add more in the future.

We wish McDermott and his family happiness and success ahead.