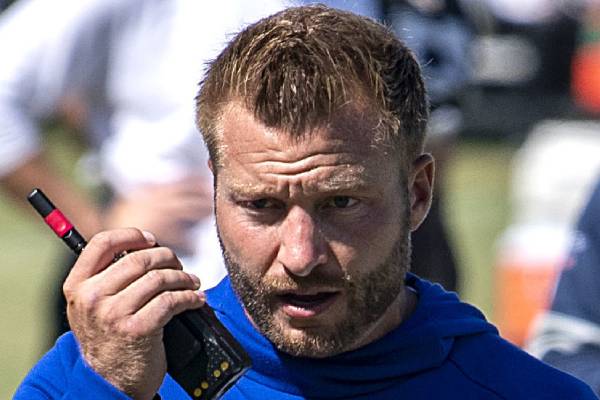 Sean McVay is regarded as one of the best offensive coaches in the NFL. Image Source: Wikimedia Commons.

If you watch the NFL, then the name Sean McVay must be familiar to you. The determined 35-year-old is the current coach of the Los Angeles Rams in the National Football League (NFL). In addition, the maestro of offensive football is the youngest ever coach in the NFL. Sean was just 30 years old at the time of his appointment as the head coach of the Rams.

Followingly, he was hired by the Los Angeles Rams in 2017 to take over as their head coach. During his coaching career up till now, he might have earned a substantial amount of money, adding to his fortune. Well, he owns a luxurious mansion in Los Angeles, California.

So, today we will talk about Sean McVay’s net worth, salary, and look into his lavish Los Angeles mansion.

Sean McVay Net Worth And Earnings

Prior to his coaching career, Sean played football during his college days at Miami University in Oxford, Ohio. He played as a wide receiver from 2004 to 2007. Sean might not have earned so much during this period but might have still made some considerable profits.

Sean McVay kickstarted his coaching career with the Tampa Bay Buccaneers in 2008. He worked as their assistant wide receivers coach under head coach Jon Gruden. However, he then moved to Florida Tuskers, working as the quality control/wide receivers in the United Football League (UFL) in 2009.

But, within a year, Sean was back in the NFL working under head coach Mike Shanahan for the Washington Redskins. He worked as one of their positional coaches until 2014 before getting promoted to offensive coordinator of the team.

Looking at the web results, the average salary of an assistant wide receivers coach was $350,000 – $375,000 in 2011. So, similarly, Sean might have earned somewhere in this range during his tenure as an assistant coach. He worked for a year each in his stints with Tampa Bay Buccaneers and Florida Tuskers.

While his time at Washington Redskins, Sean was promoted to their offensive coordinator in 2014 by the head coach Jay Gruden. Nevertheless, team coordinators’ salaries are higher in comparison to positional coaches. They can earn up to $1 million, and Sean might have made somewhere close to it or even bagged the million.

It was during his time with the Redskins, Sean grabbed everyone’s attention as one of the best offensive coaches in the NFL. Sean McVay’s net worth might have benefitted hugely from his time at Washington Redskins.

Earning As A Head Coach

As mentioned above, Sean McVay, at the time of his appointment by the Los Angeles Rams, was thirty years old and became the youngest coach in NFL history. However, since his appointment, the Rams have always finished the season with a winning record. He even guided the team to the National Football Conference (NFC) title in 2018.

The winners of the NFC title may not receive the same prize amount as the Super Bowl winners, but Sean might have still bagged a reasonable amount of money with this win.

Nevertheless, it is safe to say that Sean is a multi-millionaire in his own right from his league earnings as a coach.

In his coaching career of over just a decade, Sean has accumulated a considerable amount of riches adding it to his fortune. Furthermore, he bought a $2.7 million Encino mansion in California following his move to the Los Angeles Rams.

The property is 4,4600 square foot consisting of six bedrooms, six bathrooms, and obviously a pool. He lives in the mansion happily with his Ukrainian model fiancee Veronika Khomyn.

Hence, Sean McVay’s net worth and earnings have managed to take good care of himself. He might also own some luxurious cars and artifacts, being a household name in the NFL for coaches. Sean will remain in the game for a long time coaching at the elite level, healthily impacting his wealth.

.For More Updates On Celebrity Babies, Feuds, Their Riches, Siblings, And Entertainment, Keep In Touch With eCelebritymirror.