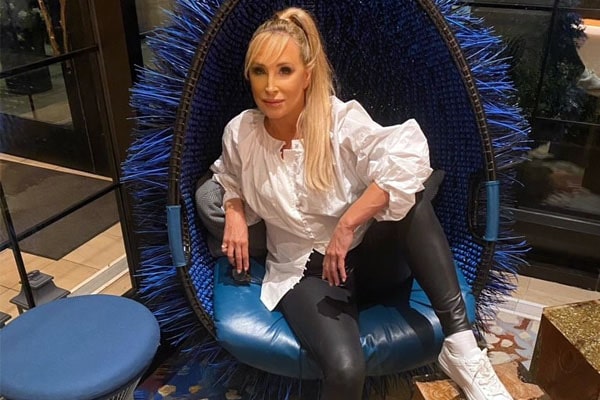 Reportedly, the famous TV personality Sonja Morgan’s net worth is estimated to be $8 million, which she has amassed from her career in television and other different ventures. It is increasing significantly with her increasing businesses.

So, what is Sonja Morgan’s earning source, and how much does she receive from Bravo for appearing on its reality TV series? Find all the details below.

Salary From Her TV Appearance

Aforementioned, Sonja Morgan is the regular cast member of the reality TV series The Real Housewives of New York City. She joined the series in 2010 in its third season and has been regularly appearing on it ever since. Besides, Morgan also appeared on Bravo’s other reality series, The Millionaire Matchmaker, to revamp her dating life in the past. For her TV appearance, Morgan is receiving a hefty paycheque from Bravo.

According to reports, the Bravolebrity Sonja Morgan’s salary from RHONY was estimated at $426,500 back in 2014. However, it went up to $465K later. Since joining RHONY’s third season in 2010, Morgan has appeared in over ten episodes. So, she might have already made a considerable sum solely from her TV appearances.

Besides, Sonja Morgan had made her Off-Broadway acting debut in October 2016 from Sex Tips for Straight Women by a Gay Man. Some years later, she gave continuity to her comedy routines at Improv and Asylum Cabaret alongside fellow RHONY cast member Countess Luann.

Long before Sonja Morgan became a household name from her TV appearances and earned thousands of dollars, she was a fashion model.

While studying for Bachelors’s in Marketing at The Fashion Institute of Technology, Morgan traveled worldwide as a model and actress. She lived in various parts of the world, including California, Colorado, Italy, and France, to pursue her career as a model.

While Sonja Morgan was active in the modeling industry, New York Magazine voted her Top 21 Best Dressed at Mercedes Benz Fashion Week in 2011. Also, she was a Weekly Star Magazine Fashion Critic. It clarifies that Sonja was one of the top models of her time and might have earned a good sum of money from modeling.

Still, Morgan continues to prove herself as a true fashion icon wearing designer costumes by Patricia Field and Chris March on RHONY. Moreover, various fashion magazines feature her on their front page. Also, she counts many top stylists and designers as her close friends., all because of her past career as a model.

Furthermore, some credits to Sonja Morgan’s net worth goes to her past career as a Brand Consultant. She was a Restaurant/Hotel and Fashion Luxury Brand Consultant for reputed establishments nationwide, from which she earned a substantial amount of money.

Owner Of A Wine Company

The award-winning entertainer Sonja Morgan also operates a wine company named Tipsy Girl Sparkling Rose, which she founded with her business partner, Peter Guimaraes. Along with it, she is also the co-owner of a restaurant and bar in the same name, located in Hartford, Connecticut.

ALSO READ: Ryan Sheckler Net Worth And Earnings As A Skateboarder

Moreover, in an episode of RHONY, Morgan had announced a line of toaster ovens she would be selling. But, she has not sold them to date. We hope that Sonja’s toaster ovens will soon become a reality. However, the RHONY businesswoman has plenty of other business to keep her busy in the meantime.

Founder And President of A Fashion Lifestyle Company

As we mentioned earlier, Sonja Morgan is a former model who represented high-end luxury brands. She used her experiences as a model and her business acumen to launch a couple of luxury fashion brands across the country. After gaining fame with her groundbreaking toaster oven recipes, Morgan decided to try her hand in entrepreneurship.

Some years later, Sonja introduced another heritage brand shoe line, Sonja Morgan by French Sole. Plus, in 2018, Morgan added a curated selection of affordable luxury fashions and accessories under $250. It debuted at NYFW in September 2019.

Also, she has a perfume line in the name Sonja Morgan New York Perfume. Fashion and beauty enthusiasts can find all these items at various stores across the United States and also online.

Some of the fashion items by Sonja Morgan and her team with their prices are as below.

Still, Sonja Morgan plans to launch many other luxury collections at affordable prices so that everyone who wants to taste Sonja Style can have it.

Sonja Morgan was once in a marital relationship with John Adams Morgan, a member of the prominent American family with banking dynasty, Morgan Family. Her ex-husband, John Adams, is a sailor, Olympic Champion, and chairman and founder of Morgan Joseph TriArtisan Group, Inc. The former pair exchanged their wedding vows in 1998 and eventually divorced seven years later, in 2006.

Various online sources claim that the ex-husband of Sonja Morgan, John Adams Morgan, owes Sonja around $3 million as a portion of their divorce settlement. Also, he owes $300 thousand in child support of their daughter, Quincy Adams Morgan.

Moreover, after divorce from John, Sonja had even filed for Chapter 11 bankruptcy citing $19,8 million in debts and only $13.5 million in assets. However, while appearing on Andy Cohen‘s ‘Watch What Happens Live‘ talk show, she revealed that she paid a hundred percent of her debt on the dollar.

Despite filing for bankruptcy and paying all the debt along with additional administration fees of about $2 million, Sonja Morgan still has millions of dollars to her name. All the credits go to her impressive real-estate portfolio. She owns a five-story townhouse on the Upper East Side of NYC.

Earlier, Sonja kept it on rent for $32K per month. But, due to the pandemic, she herself moved into the townhouse and saved on paying rent at her pied-à-Terre in Columbus Circle.

So, with the rising success, Sonja Morgan’s net worth is only set to soar higher. Despite various financial hardships in the past, she is financially stable at the moment. She has amassed enough dollars to give a lavish life to her daughter, pay taxes to the government in time. She also has a considerable sum to get herself insurance and enjoy luxurious vacations in exotic locations.