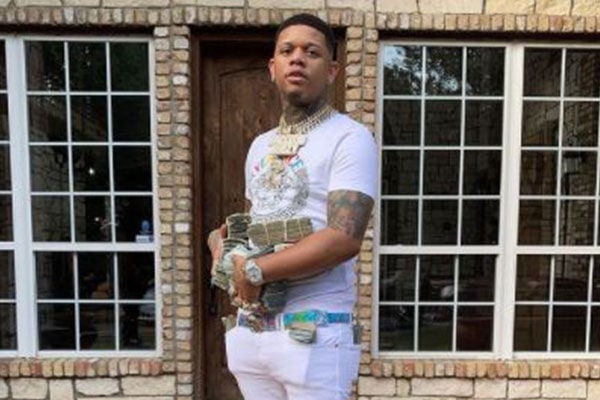 Yella Beezy is one of the richest rappers of his time. Image Source: Yella Beezy Instagram.

Markies Deandre Conway, famous by his stage name Yella Beezy, is a rapper, songwriter, and singer from Dallas, Texas, USA. He has released various singles, and That’s On Me, Bacc at It Again, Going Through Some Thangs, and Up One are some of his best-known singles.

Markies, aka Yella, has amassed an enormous fortune from his singing career. According to Celebrity Net Worth, Yella Beezy’s net worth is estimated to be $4 million. He accumulated such a massive wealth from his music and various other ventures. Now, let’s learn more about the rapper’s multi-million dollars of fortune.

Yella Beezy Net Worth And Career

Aforementioned, Yella Beezy’s net worth is estimated to be $4 million. The massive wealth that he has amassed has helped him live a comfortable and lavish lifestyle. The father of two, Yella has established himself as one of the popular rappers of his time.

Yella, who wanted to become a professional football player, dropped out of high school without his diploma after getting kicked out of school for fighting often. He was already making music from an early age and, in 2017, released his debut mixtape Oak Cliff America Vol.1: Broke Nights Rich Days. The same year, he released the mixtape Life Work, Vol.2. Furthermore, in 2018, he released Ain’t No Goin’ Bacc. The mixtape featuring various artists like Lil Baby, 2 Chainz, T.I., and Boosie Badazz, reached #24 on the Billboard 200 chart.

Beezy gained popularity after opening for Jay-Z and Beyoncé during the On the Run II Tour in Houston and Dallas. He then released another mixtape, Baccend Beezy, the first mixtape released under his label Hitco. The mixtape featured hit singles like Bacc At It Again and Restroom Occupied. Here are some of his songs and the price of their Audio CD.

Throughout his singing career, Yella has amassed an enormous fortune. He is yet to release a full-fledged album, so there’s no doubt that he will be increasing his net worth in the coming days.

Also Read: Mike Evans Net Worth From His Multiple Sources

Apart from earning considerably as a rapper, Yella has also earned from his YouTube channel with 1.1M subscribers. According to Social Blade, Yella’s YouTube channel has an estimated monthly and yearly earnings of $14.6K- $233.5K and $175.1K- $2.8M, respectively.

As stated earlier, Yella Beezy’s fortune is $4 million. The multi-millionaire rapper has accumulated such a huge wealth from his profession as a rapper. With a net worth like that, Yella is enjoying a lavish life. According to VladTV, he had $400K worth of jewelry back in 2018. In the interview, he talked about the importance of jewelry for rappers. In the recent interview uploaded by VladTV, he revealed that he has jewelry worth $1 million. Most of the pieces in his jewelry collections are the product of Manhattan Jewelers, and he has also gifted expensive jewelry items to his son.

Thanks to his massive wealth, the rapper is able to afford jewelry worth $1 million in addition to many other luxurious items.

As mentioned before, Yella Beezy’s net worth is $4 million. With wealth like that, the rapper is enjoying a comfortable and lavish lifestyle. He resides with his family in Frisco, Texas, U.S. In 2019, he bought a house worth millions of dollars. As he loves to keep his private life out of the spotlight, he has not revealed the house’s location and the price it was purchased at.

The rich rapper also owns cars of luxurious brands like Mercedez Benz, Lamborghini, and many others. Going through his Instagram, we can see that he has a huge collection of jewelry and cars. He is also seen showing off bundles and bundles of cash. He also posts pictures from his vacation to different places.

Beezy also has a wardrobe collection where he has products from luxurious brands like Versace, Gucci, and many others. So, we can see that the rapper is living his best.

Was Shot Many Times

The famous rapper Yella Beezy was shot multiple times while driving in Lewisville. He was driving on the highway on October 14, 2018, when a vehicle pulled up next to him, and someone began to shoot at him. The vehicle was fired 23 times, and Beezy struck three times. He was rushed to the hospital and was released after a week.