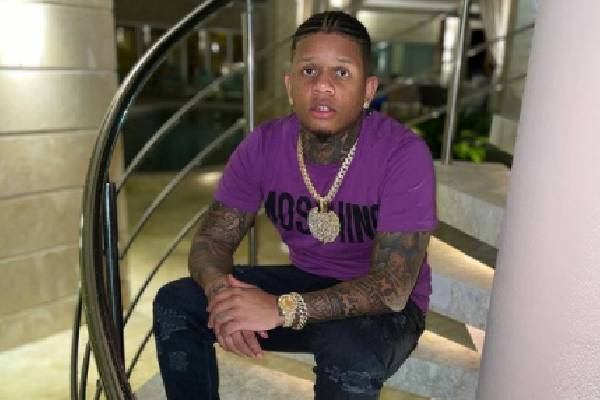 Markies Deandre Conway, better known as Yella Beezy, is an American rapper, singer, and songwriter from Dallas, Texas. He is popular for the singles That’s On Me, Bacc at It Again, Up One, and Goin Through Some Thangs.

Going through Yella’s personal life and family, he has kept everything under the sheets. It’s still uncertain if Yella Beezy has a girlfriend or wife. Besides, the rapper is a proud father as well, but Yella Beezy’s children have also remained away from the spotlight.

Here is everything about Yella’s kids and their whereabouts.

Yella Is The Father Of Two

Given Yella Beezy’s net worth at $4 million, he enjoys fancy cars and luxury items. However, Yella, aka Markies Deandre Conway, enjoys being a father to his beautiful kids, Baby Yella and Dallas Conway.

Gucci my bag, me and my son pic.twitter.com/XmQPuYHU8S

There is no doubt that Yella Beezy will be a good father to his kids. The celebrated rapper seems to try his best to prove how dearly he holds his family.

Has Not Revealed First Child’s Name

Yella Beezy’s first child was born in January 2018. The popular rapper Yella has not revealed his first child’s name. However, he calls him Baby Yella and has even addressed him as MJ in some interviews. Although there is not much information about the first child, he must have got proper care during his birth from his parents. Baby Yella also has his own Instagram page where his father posts about his activities. The little kid has 13.1K fan followers in his Instagram account. Near in the future, the boy can be influenced by his father’s musical career and pursue his career in the same field.

Likewise, Yella Beezy welcomed his second son, Dallas Conway, in January 2021. He announced the good news of adding a new member to the family through his Instagram.

Yella Beezy’s Kids Are Showered With Lavish Gifts And Vacations

Aforementioned, the American artist’s sons are away from the media presence. However, Yella Beezy’s children are frequent faces in his social media handles.

After gaining tremendous success in the music industry, he has earned great wealth, which he uses to gift his kids luxury lifestyles.

Although Beezy loves going on vacation and spending quality time with his babies, he tries to keep the news away from the media approach. Therefore, let’s hope to learn about them in the coming days more often.

According to some online sources, Yella Beezy’s baby mama is his girlfriend, Alias Justdee. Little is known or made public about her, and the pair have not confirmed if Alias is truly the mother of Yella’s sons. As per her Instagram, Justdee is the CEO of Dhair Boutique.

Going through her social media handle, Yella’s partner has not posted much about his sons but if she is their mother then Alias must be enjoying her motherhood in privacy. Also, both Beezy and his girlfriend haven’t posted anything further about their relationship or even any reason if they have parted their ways. Still, we hope they are enjoying their parenting.

As we are known, in fact, Yella Beezy keeps his personal life under a wrap. However, there is no doubt that he is living a comfortable life with his kids without any disturbances.

Although secretive about his children, Yella uploads their pictures on social media handles occasionally. Moreover, Yella Beezy’s children accompany him on his vacations. Yella loves to spend his time with his babies and build a healthy relationship with them.

In a nutshell, Yella Beezy and his offsprings are enjoying a lavish life under his safe wings. Hence, let’s hope to hear more about the children in the upcoming days.