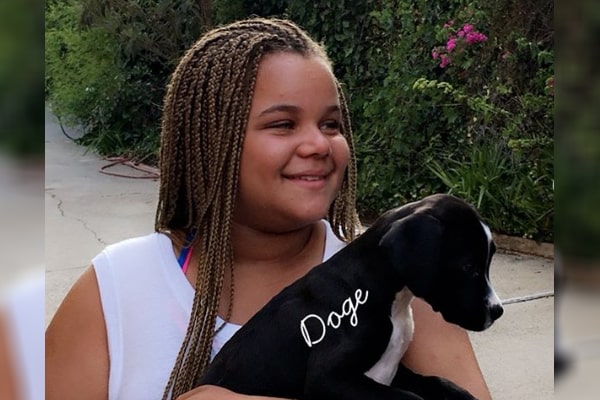 Cuba Gooding Jr. is a famous name in the entertainment industry. Rising into prominence in 1991, he has accumulated an enormous fanbase and even managed to receive Academy Awards for his outstanding performances.

Besides being a critically acclaimed actor, he is surrounded by a fair amount of controversies as well. However, above all his roles and allegations, Gooding Jr. is a phenomenal father of three. And today, we shall tail one of his children, more specifically, his youngest one, Piper Gooding. So, let’s find out about this beautiful young lady.

Aforementioned, Cuba Gooding Jr. is a doting father of three with his ex-wife, Sara Kapfer. He welcomed his youngest child, a daughter, Piper Gooding, in 2005. She has two elder brothers, Spencer Gooding and Mason Gooding, who are way older than her.

Unfortunately, Gooding Jr.’s daughter is living a private life, which is why there isn’t much about her. Furthermore, she is present on Instagram, but it is private. Additionally, Piper garners more than 800 followers and looks like she loves sharing adventures with her followers.

However, her older brother, Spencer, is making sure the world sees Piper’s adorable smile. The 15-year-old must be doing what an average teen does, school, homework, family, friends, and fun. Therefore, privacy could be the best choice for a teen to grow up.

Cuba Gooding Jr.’s daughter, Piper, is the youngest in the family. Thus, she is showered with love and attention at all times. But she is not as spoiled as one can think of a star child.

As stated above, Piper maintains her privacy, but Spencer loves to share her sister’s happiness via his Instagram. He once uploaded a video of him surprising his baby sister with a puppy.

It was a sweet gesture, and even sweeter was Piper’s shooketh expression. But the show stopper was their puppy Scout, who was bamboozled by his reflection.

Aforementioned, Piper Gooding is growing up with her two brothers, Spencer Gooding and Mason Gooding. They love their baby sister and Spencer posts about Piper occasionally.

In regards to Piper Gooding’s siblings’ careers, they have heightened and started to work their sweats off. Also, let’s point this out, looks like nepotism is not a thing in the family because both Spencer and Mason are paving path on their own. Plus, Cuba Gooding Jr.’s parents, Cuba Gooding and Shirley Sullivan were singers, which can explain their performance energy.

Piper Gooding’s oldest brother, Spencer, is into filmmaking and writing. He is currently serving as an executive assistant to the chairman at Mandalay Entertainment. Likewise, her second brother, Mason, is working his way up as an actor. He has several acting credits, including Love, Victor, Everything’s Gonna Be Okay, Booksmart, Ballers, etc.

Well, we will have to wait to see if Cuba Gooding Jr.’s daughter continues her father’s legacy or make her own. But until then, we shall hope to see her more frequently in the future.

It is no secret that Cuba Gooding Jr. married his high school sweetheart. He met his ex-wife, Sara, when he was 21, and she was only 17. Thus, Cuba admitted to the fact that he saw his former partner evolve from a high schooler to a college student, then a newlywed, and a mother.

The couple dated several years before sharing their vows on 3 March 1994. Gooding Jr. kept his relationship and marriage low-key and welcomed their first child, Spencer, within the year of their marriage.

Cuba Gooding Jr.’s baby mama saw him rise from nowhere to the top. And with time, the pair had welcomed three kids together, and Jr.’s fame was heightening as well. Thus, the former couple had a few sets of rules to balance work and home, which included ‘not go more than four weeks without seeing one another.’

Unfortunately, it’s human nature to ware out on things if they drain more energy, and maybe a similar case occurred between the couple. As a result, the pair legally separated in 2014.

Piper Was Only Ten When Gooding Jr. Filed For Divorce

As stated above, Piper Gooding’s parents legally separated after her mother, Sara, filed for legal separation in 2014. She further cited in her documents their divorce reason as ‘irreconcilable differences.’ However, Cuba and Sara tried to make things work for their children. In an interview with Steve Harvey, Cuba addressed his separation as ‘things happen, and you grow up.’ He further revealed that he took his wife on a date the day before the show in 2016.

Cuba also talked about maintaining their relationship for their children, and a break or two were standard in marriage. Well, sounds logical.

However, it looked like Cuba Gooding Jr. finally lost his patience and filed for the divorce in January 2017.  The O.J Simpson star asked for joint legal and physical custody of their daughter, Piper, who was only ten at the time. Furthermore, Cuba was very much willing to show Sara the money in spousal support but hold your cup tight because Gooding Jr. isn’t giving any cash more than the spousal support.

According to TMZ, Cuba wants his earning to remain his and his alone from the day Sara filed for separation. It looks like the case is still ongoing.

The name Piper is of English Origin, which means flute player.