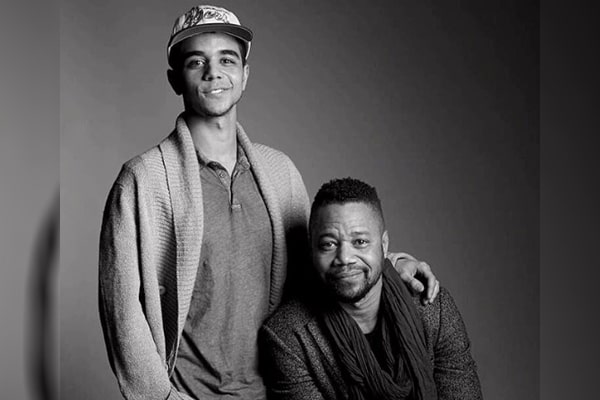 Jerry Maguire actor, Cuba Gooding Jr., rose to fame in 1991 and has starred in several critically acclaimed movies. The Academy Award winner is not just known for his good works but came into highlight because of some scandalous things.

But still, there is no denying that Cuba Gooding Jr. is a doting father of three with his former wife, Sara Kapfer. So, for now, we shall be tailing Cuba Gooding Jr.’s son, Spencer Gooding. Let’s see how good he is from here on.

Cuba Gooding Jr. is a great father of three beautiful kids. Among them, Spencer Gooding is their eldest child born the year the couple shared their vows in, i.e., 1994.

Cuba Gooding Jr.’s son, Spencer Gooding’s childhood was often secluded from the media scrutiny. However, he grew up along with his baby brother, Mason Gooding, who is only two years younger than him. Although Gooding’s parents welcomed a baby sister, Piper Gooding, he mostly grew up with his brother.

Spencer Gooding is a humble guy with a kind heart and high work ethics. The 26-year-old has started grinding and making his living. It might as well suit to say that Gooding Jr. and Kapfer are very proud of their eldest son, who likes to introduce himself as a filmmaker and a writer.

According to Spencer Gooding’s LinkedIn profile, he likes to introduce himself as a filmmaker and writer. Graduating from Wesleyan University in English literature in 2018, he currently serves as an executive assistant to the chairman at Mandalay Entertainment since 2018.

Furthermore, Spencer has managed to create an identity as a diligent employee and garnered extensive work experiences since his highschool years. Likewise, Gooding Jr.’s son served as a production assistant at 21st Century Fox in 2016 for three months. Similarly, he also worked at Comedy Central as an on-set production assistant in 2014.

Besides being an assistant, Spencer also worked as a sound operator, camera production assistant, and BTS cameraman & editor during the start of his career.

Spencer is a highly motivated lad with big dreams and aspirations. He also seems to enjoy his work as he documents it on his Instagram. But, Spencer is dedicated and very interested in learning new things, which led him to join summer sessions in Human Education & Anthropology and Language & Social Interaction in 2015 at UCLA. Let’s hope he achieves all his goals and outshines his father.

Aforementioned, Cuba Gooding Jr.’s son, Spencer Gooding, is a very energetic fellow and loves his job. Hence, most of his workdays are the highlights of his Instagram.

The social bee loves to hang out with his friends and share pictures with his family. Besides his workdays and vacations, he showers his love for his family via Instagram and shares their fun moments. Furthermore, he shares numerous throwback photos and entertains his followers.

Spencer’s father Cuba Gooding Jr. was very private about his marriage with Sara but shared a piece every now and then. However, he is a star, and a few personal matters are bound to peek out. Likewise was with the case of their high school romance and very exposed legal separation.

The former couple met during their high school years as Cuba Gooding Jr.’s ex-wife, Sara was only 17, and he was 21. Spencer’s parents dated several years and tied knots on 13 March 1994. The former love birds were married for more than two decades but unfortunately parted ways in 2014 after Sara filed for legal separation.

The news of the Hollywood couple was a shocker because even when Gooding Jr.’s fans speculated him to marry some hotshot, he put his high school lover in the spotlight as if their love was eternal. Well, it’s human nature to fall in and out of love, and Cuba managed to love his ex-wife in every transitional form he saw, a highschooler, a college student, a newlywed, and a mother.

But time played its role, and hence Spencer Gooding’s father filed for divorce in 2017. Gooding Jr. was more than ready to show Sara spousal support. But, here’s the catch. The O.J Simpson star wanted to claim his earnings as ‘his and his only’ since the day the couple legally parted ways.

As of now, the former duo, Cuba, and Sara have parted ways; they are still connected by their children. Let’s hope Spencer’s parents form a friendship and keep the atmosphere calm around their family.

The name Spencer is of British origin, which means steward” or “administrator.”