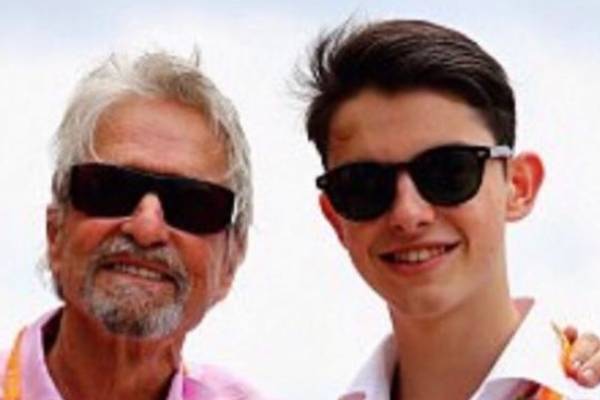 Michael Douglas and Catherine Zeta-Jones are famous names in Hollywood. Michael is a successful actor and producer who has received many awards in his entertainment career, including five Golden Globe Awards, a Primetime Emmy Award, and two Academy Awards. Similarly, Catherine has also achieved massive success in her acting career and has received several awards and accolades just like her husband.

The pair are also popular for their successful marital life. They have been together for several decades and are the doting parents of two kids, a son, and a daughter. While many of their fans know about their love life, information about their kids are scarce.

His Parents Have 25 Years Of Age Differences

As stated above, Dylan Michael Douglas is the only son of Michael Douglas and Catherine Zeta-Jones. His dad and mom met for the first time in 1998 at the Deauville Film Festival in France. Their mutual friends Melanie Griffith and Antonio Banderas introduced them to each other.

During an appearance that Michael made on The Jonathan Ross Show in 2016, he recalled that after meeting Catherine for 30 minutes, he told her that he would be the father of her kids. A year later, in December 1999, Dylan’s dad proposed to his mom, and they walked down the aisle on November 18, 2000.

Their marriage ceremony was held at the Plaza Hotel in New York and reportedly cost $1.9 million. Similarly, BBC labeled it the “Wedding Of The Year.”

Dylan Michael Douglas’s dad and mom have 25 years of age gap, and their marriage is still going strong. The couple often talks about their relationship and obstacles that they overcame in their marriage in different shows.

Michael Douglas’ son, Dylan Michael Douglas, was born on August 8, 2000, three months before he and Catherine got married. Moreover, they did not even venture out on a honeymoon after their marriage so that they could spend time with him. In an interview with Reuters, Dylan’s dad stated that 2000 is the year that he will never forget.

Dylan Michael Douglas is the eldest child of his parents. Dylan’s sister, Carys Zeta Douglas, was born on April 20, 2003, three years after his birth.

The Douglas siblings have a great bond with each other. They often share adorable photos on their Instagram accounts and wish each other a Happy Birthday with lovely captions.

His Half-Brother Had A Troublesome Past

While Dylan is the only son of Catherine, he is the second son of Michael. Catherine is Michael Douglas’ second wife, and before meeting her, he shared a marital life with Diandra Luker. Dylan’s father had tied the knot with his first wife in March 1977. A year later, in December 1978, Dylan Michael Douglas’ half-brother, Cameron Douglas, was born.

Cameron had a troublesome past and was even sentenced to prison for five years. In 2009, he was arrested at a New York hotel for possession of methamphetamine. After he was arrested, Drug Enforcement Administration agent gave him a choice, either they take him out the front door screaming and kicking, or for the sake of his family, they take him out the back way and put him in a car.

Dylan’s half-brother was charged with dealing and sentenced to five years in prison that year. Two years were added to his sentence after he was caught with drugs that he had bought from another inmate. In 2016, he was released from prison.

Currently, Cameron is pursuing an acting career, and he is living a great life with his girlfriend, Viviane Thibes, and two kids, Lua Izzy Douglas and Ryder T. Douglas.

Dylan has a great relationship with Cameron, and they often spend holidays together. Moreover, the brothers do not hesitate to show their love for each other via social media.

Went To A Specialized School

Catherine Zeta-Jones’ son, Dylan Michael Douglas, attended a special-needs school. After his birth, his parents moved to Bermuda to protect him from the pressures of having famous and wealthy parents. Eventually, they had to move back to New York in 2010 so that Dylan could attend a specialized school to help him with dyslexia.

In an interview with Guardian, Dylan Michael Douglas’ dad, Michael, admitted that he dealt with dyslexia to a degree as it runs in the family and his uncle also has it. In an Instagram video, Catherine Zeta-Jones’ son talked about his battle with the condition. He also shared about his home life at the time.

Michael Douglas’ son, Dylan, also revealed that he felt lonely at home, and at The Winward School, the school he attended, he felt free. There he got help with dyslexia, which he struggled with since he was five years old. He even shared about the happier time, after his dad was cancer-free and everything became normal.

Michael Douglas and Catherine Zeta-Jones’ baby boy, Dylan Michael Douglas, attends the Ivy League School. In 2017, he enrolled at Brown University. While dropping him off, his parents and sister traveled to the Rhode Island campus. Similarly, his mom also shared a heartfelt video of them dropping him off at the campus.

Dylan’s mom, Catherine, captioned that video saying, let the lectures really begin and even wished him good luck for the exciting and enlightening chapter of his life. He will be graduating from the university in 2022.

Similarly, Dylan’s sister, Carys, also attended boarding school in Europe and graduated in May 2021 with honors for her International Baccalaureate. She is soon to attend college for her further studies. Nevertheless, we hope the Douglas siblings have a great future.

Has Followed In His Parents’ Footsteps

As mentioned earlier, Dylan Michael Douglas is the son of Michael Douglas and Catherine Zeta-Jones, the successful personalities of Hollywood. Growing up with successful and talented parents, Dylan must have developed some interest in acting.

According to his IMDb, Catherine Zeta-Jones’ son, Dylan, lent his voice to the character Russell in Phineas and Ferb’s television series. Similarly, he has also made an appearance in the television show Formula 1: BBC Sport. So he might get involved in acting more and become a famous actor like his parents.

Besides acting, he also seems to be into music. In February 2020, he uploaded a video of him singing Rolling Stones’ songs onstage at a cafe. Similarly, he has shared several other posts of him playing different instruments.

Not only that, but he has also posted another video of him singing at home, and even showcased his talents for playing bass.

Who knows, Michael Douglas’ son, Dylan, might become a successful singer in the future.

Is An Adventurous Guy

Michael Douglas’ younger son, Dylan, seems to be an adventurous guy. In The Ellen DeGeneres Show, the host shared a clip of his diving off a cliff into the water. Similarly, he has also uploaded videos and photos of his skydiving. In the show, Michael recalled how he told his son not to be the first one to jump.

Apart from his adventurous habits, Catherine’s son is also into politics. He is a political activist who co-founded Make Room Now, a Political Action Committee (PAC). According to The Things, the committee raises money privately to support the candidates they believe in. Moreover, they supported the successful candidacies of Democrats Jon Ossoff and Raphael Warnock.

Furthermore, talking about his love life, Michael’s son has been in a relationship since July 2016, as per his Facebook description. However, the identity of Dylan Michael Dogulas’ girlfriend has not been revealed yet.

Going through his Instagram, we can see that Dylan is doing great in his life and is living a comfortable lifestyle. He often travels to several places. Nevertheless, let’s hope to see him succeed in the future.

The name Dylan means Son Of The Sea and has a Welsh origin. Similarly, the name Michael means Who Is Like God? and has a Hebrew origin.