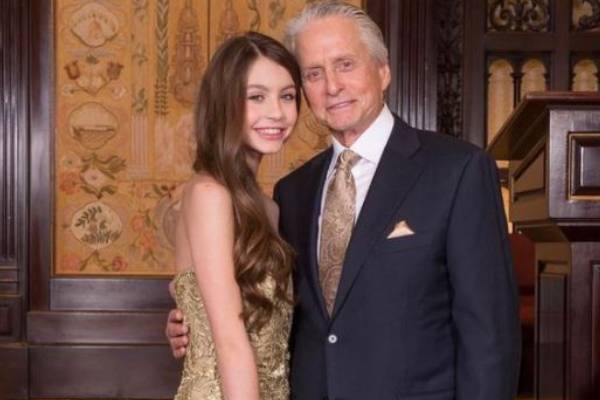 Michael Kirk Douglas, also known as Michael Douglas, is one of the most famous names in Hollywood. He is an actor and producer who has received several awards and accolades for his work. Besides the fame that he has gained from his professional career, he is also known as the eldest son of legendary actor Kirk Douglas.

Moreover, Michael is also popular due to his marital life with Catherine Zeta-Jones, who is 25 years younger than him. The Douglas couple has been together for many years, and in all these years of togetherness, they became the parents of two kids, a son, and a daughter.

Well, how about we learn in detail about Michael Douglas’ daughter, Carys Zeta Douglas.

Second Child Of Michael And Catherine

As mentioned earlier, the famous actor shares a blissful marital life with Catherine Zeta-Jones, a successful Hollywood actress. The couple met in 1998 for the first time and got married on November 18, 2000. It has been more than twenty years since they tied the knot, and they became the parents of two in all these years of togetherness.

Carys Zeta Douglas is Michael Douglas’ daughter with Catherine, whom they welcomed on April 20, 2003. As the youngest one in the Douglas family, she is undoubtedly pampered a lot by her elder siblings and parents.

As mentioned earlier, Michael Douglas’ daughter is his second child with Catherine. In addition, Carys Zeta Douglas has an elder brother and half-brother. Carys’ sibling, Dylan Michael Douglas, was born on August 8, 2000. He was born three months before the marriage of their parents.

Similarly, Carys Zeta Douglas’ half-brother, Cameron Douglas, was born in 1978. He is Michael’s son with his ex-wife Diandra Luker. Cameron is also an actor and has starred in many movies and television.

Moreover, Carys’ half-sibling had a troublesome past as he was arrested for the possession of drugs in 2009 and sentenced to prison for five years.

After being released from prison in 2016, Cameron began pursuing an acting career. He lives a blissful life with his partner, Viviane Thibes, and two children, Ryder T. Douglas and Lua Izzy Douglas.

Carys is close with both of her elder brothers, and she often hangs out with them. Plus, she also writes heartfelt messages for them on their birthdays.

Michael Douglas’ Daughter Wants To Be A Doctor

Michael Douglas’ daughter, Carys Zeta Douglas, is a grown-up and is set to attend college. She studied at a boarding school in Europe and graduated in May 2021. Her parents and brother were there to see her receive her degree but had to watch virtually from a separate room due to Covid restriction. Interestingly, people confused Carys’ dad for her grandfather at her graduation.

In September 2021, Carys began her college. But she and her family members have not revealed the university she goes to. However, her mom uploaded a photo of her with her brother, Dylan. Catherine captioned the picture saying it was the first day of class for a freshman and senior student. She also added that she loves both her kids and is proud of them.

Furthermore, in an interview with Extra TV, Carys revealed that she wanted to be an Ivy League student and become a doctor or an actor. Well, she must be working hard to fulfill her dream. Whatever profession she pursues, her parents must be supporting her wholeheartedly.

Michael Douglas’ kid, Carys Zeta Douglas, is into fashion like his wife, Catherine Zeta-Jones. She has been featured on different magazine covers. In addition, she has made fashion week appearances at Michael Kors and Dolce & Gabbana.

In an interview with Town And Country Magazine, Carys revealed that fashion has been a crucial part of her life. And since her mother is a fashion icon, Carys grew up looking through Catherine’s closet.

Carys appeared on the magazine cover of Town & Country, with her mom, in 2018. The mother-daughter duo again posed for Vanity Fair Spain in 2019.

In February 2019, Carys attended the Michael Kors’ Fall 2019 fashion show at New York Fashion Week with her dad and mom. Furthermore, in October 2019, she took part in the Fendi Peekaboo campaign with Catherine.

Moreover, Michael’s baby girl often shares different pictures of fashionable clothes. Having a mom who knows about the fashion and entertainment industry must have paid off really well for Carys.

Apart from fashion, Catherine Zeta-Jones’ daughter, Carys, seems to be interested in music. She has shared clips of herself singing and playing the piano on her Instagram. Similarly, she has also made highlights of her onstage performances and piano playing.

Moreover, Carys Zeta Douglas’ mother uploaded a clip of her singing and playing piano during a concert on International Women’s Day. Besides Carys, her brother also seems to have musical talent. Going through his Instagram, we can see that Dylan has shared photos and videos of him singing and playing instruments.

While it is unclear if Carys and her brother will pursue music professionally, it is evident that they are talented singers.

Michael’s daughter, Carys, also seems to be into acting. Growing up with mom and dad, who are well-known actors, must have helped the youngest Douglas sibling develop some interest in acting. Carys has appeared in several school plays, including Tommy and Spring Awakening and Once on This Island.

Was Bullied At School

Many people think being a celebrity kid is easy, and they enjoy their stardom. However, it has become the exact opposite in the case of Carys. While she was at school, other students often bullied her regarding her dad’s age. In an interview, she revealed that whenever her dad came to pick her up, people would mock her saying her grandfather was here to pick her up.

Carys even added that being a celebrity kid was even more challenging as she has to work harder to prove that she is not just her dad and mom’s daughter. In addition, she often had a hard time making people understand that she has worked hard to get what was her.

Similarly, Carys also revealed the many times she had to deal with paparazzi and tabloids. With the days passing, she seems to have dealt with the things that come along with stardom.

Carys seems to be doing great and is living a wonderful life. She often travels to many places and shares pictures from there. Nonetheless, let’s hope we see Michael Douglas’ daughter succeed in the future.