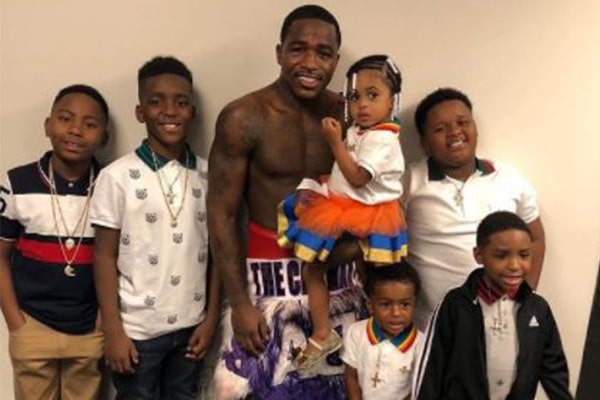 Besides his successful boxing career, he is also a loving partner and a great dad. He currently lives a blissful and comfortable life with his fiancee Arie Nicole and their three kids. Furthermore, Broner has five other kids from different baby mamas. So, for now, let’s learn more about Adrien Broner’s children and their whereabouts.

As stated earlier, Adrien Broner is engaged to his girlfriend, Arie Nicole. He proposed to her a huge 6-carat diamond ring in November 2015. The duo who are yet to be married, have three children together. Among the three kids, Adrieon Broner is the eldest. The lovely pair of Adrien and Arie welcomed their son in February 2015.

As of 2021, Adrien’s child, Adrieon, is 6 years old, and he seems to be enjoying a great childhood. He also has an Instagram account, which according to the account’s description, is run by his mother. Talking about his name, Adrieon could have been derived from the Latin name Adrien which means “Person from Hadria.”

As stated earlier, Adrien and Arie are proud parents of three children. One year after welcoming their first child, Arie gave birth to their second child, a daughter named Aalayah Broner. The baby girl was born in March 2016. She is the only daughter of the couple and is enjoying her childhood with the siblings.

Just like her elder brother Adrieon, Aalayah also has an Instagram account which is run by her mother. Talking about her name, Aalayah originated from the Arabic name Aaliyah, which means “Elevated, Lofty, Sublime.”

Adrian’s fiancee, Arie Nicole, gave birth to their third child in March 2020. The youngest kid is the couple’s second son, whom they named Ahseir Julez Broner. He shared the news about the birth of his youngest child through an Instagram post.

Adrien Broner’s son, Ahseir Broner, is growing up with his siblings and surrounded by love. However, unlike his brother and sister, he does not have any Instagram yet. Furthermore, his name Ahseir might have been originated from the Islamic/Muslim name Ahsir which means “Wealthy, Grateful, Thankful.”

Apart from his three children with fiancee Arie, Adrien is the father of five other kids with different baby mamas. Adrien’s eldest child is Adrien Broner Jr., whom he had with one of his former partners. Details regarding Adrien Broner Jr.’s mother have not been revealed yet, but going through his Instagram, we found out that she is a nurse, and has an Instagram named Tesh Tesh.

Adrien’s eldest child, Adrien Broner Jr., was born in June 2007 and must be in his teenage years now. Talking about his name, Adrien might have been originated from the Latin name Adrian which means “Person From Hadria.”

As stated earlier, Adrien is the father of five other kids besides the three children with Arie Nicole, Armani Broner being one of them. The boxer’s baby mama who is also his eldest child’s mother gave birth to Armani in October 2009. He is growing up with his older brother and another younger sibling. Talking about his name, Armani has an Italian origin, which means “Son Or Kin of Armand.”

Nene Broner is one of the children of Broner. Her real name might be Na’Riya Broner, and she was born in November 2008. However, information regarding her mother has not been revealed yet. In April 2019, Adrien was called out by his kids after he complained about child support, and Nene was one of them.

In the Instagram post, Adrien Broner’s daughter, Nene expressed her disappointment, and she mentioned two other siblings to let them know about the post.  Furthermore, in response to Nene’s comment, the professional boxer said that he was just joking and he will have their back until he is old. However, none of them seemed to believe their father.

Adrien’s other child is KJ Broner. Just like Nene, details about KJ’s mama have not been revealed. According to the posts on Adrien’s Instagram, he was born in March 2011. Unlike his other siblings, KJ does not seem to have an Instagram account and seems to be living lowkey life.

Adrien’s other kid is Admire Broner. However, the information regarding his mother and birthdate has not been revealed yet. Just like KJ, he seems to be away from social media. Talking about his name meaning, the name Admire has an English origin which means “Gift of God.”

Adrien Broner loves his kids more than anything. Despite the controversies that he has been involved in, his offsprings seem to be having a great childhood. Adrien Broner’s children love each other despite having different mothers and are surely living their best life.