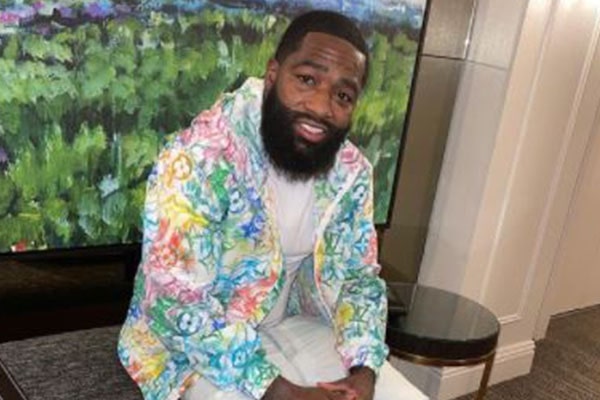 Adrien Broner, born Adrien Jerome Broner, is a professional boxer from America. He is famous as an athlete who has held multiple world championships in four weight classes in different years. He is also renowned for his over-the-top antics both in and out of the ring. He has competed in various boxing matches in his career and has won several championship titles and awards.

Besides being one of the successful personalities in the boxing world, Broner is also a family person. He loves spending time with his family. He is engaged to his girlfriend Arie Nicole and has three children with her. So, let’s learn more about Adrien Broner’s partner Arie Nicole and her whereabouts.

Is Engaged To The Boxer

Aforementioned, Adrien Broner is one of the most successful boxers in the world. Adrien was in a relationship with Arie Nicole for a long time before getting engaged in November 2015. He proposed to her with a massive 6-carat diamond ring. The lovely pair began dating in 2012.

In an interview with VladTV, Adrien mentioned that he does not want to ruin the relationship with her. He also said that he has learned a lesson from his previous relationship and won’t make things worse with his future wife, Arie Nicole, as she is really good.

Although the couple has not mentioned anything about when they are getting married, many sites have reported that the pair have already tied the knot. Adrien and Arie also addressed each other as husband and wife in the past, which led people to say that they were already hitched. However, they don’t seem to talk much about their relationship and are secretive about their love life. Neither of them has posted any pictures of their partner on their social media, but they used to mention each other in the past.

Has Three Kids With Him

As mentioned before, Adrien Broner’s fiancee is Arie Nicole, whom he dated for quite a long time before getting engaged. The lovely pair have three children together. Arie gave birth to their firstborn, a son, whom they named Adrieon Broner, in February 2015. Arie gave birth to her second child, a daughter, in March 2016. They named their daughter Aalayah Broner. Furthermore, they also have their third child, a son, who was born in March 2020. They named their third child Ahseir Broner.

The lovely pair are raising their children with great love and care. Adrien also has five other kids from his other relationships.

Adrien and Arie’s relationship have been through various ups and downs. They have been known to share their relationship problems on their social media profiles. In 2015, the now engaged pair gained a lot of attention regarding their relationship when they broke up. That all happened when Adrien took a trip to Las Vegas for a fight with Floyd Mayweather. At that time, he uploaded a picture on Instagram saying that Nicole did not want him back in the house.

Similarly, Nicole too posted on Instagram, implying that her now partner Adrien had cheated on her. It’s not clear when they made up but were back together by the end of the year.

Has Been Accused Of Cheating

As stated earlier, Arie and Adrien’s relationship has always been a subject of public discussion as both of them share their relationship problems on their social media. In 2014, Adrien accused Arie of cheating on him. He wrote about Arie cheating on his Twitter page.

Well, the boxer also mentioned Arie having a miscarriage. Nevertheless, Adrien’s now soon-to-be wife also did not stay quiet and fired back on social media.

Adrien’s fiancee Arie Nicole is the mother of his three children. The lovely pair, who began dating each other in 2012, has come a long way in their relationship. They always had been a hot topic of the media. Just like that, in 2012,  Adrien and Arie’s relationship was again news when he pranked her by pretending to propose after a boxing match.

Adrien gathers the attention of everyone around him by getting down on one knee. He was showing as if he was getting prepared to propose to her but instead asked her to brush his hair. Arie laughed it off, but her Twitter posts seemed like she was upset and not so thrilled with the prank.

But, Adrien eventually proposed to his girlfriend in November 2015. They both are living a happy and comfortable life with their children.

Adrien Broner’s partner Arie Nicole gained immense fame as the partner of the famous boxer. She is also an entrepreneur. She runs a business of hair oil which is named after her daughter, i.e., AlayHairOils. The store, named ShopAlay, sells different types of hair oils. We hope that the business is doing really great.

Despite the enormous fame Arie has gained as the famous boxer’s partner, she loves to remain away from the spotlight and media. She has a private Instagram account with 171K followers. We hope that the lovely engaged duo are doing great for themselves.