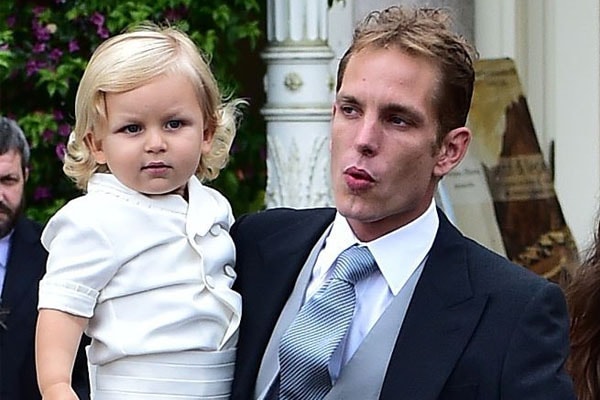 The firstborn of proud parents, Andrea and Tatiana, Alexandre Andrea Stefano, was born on 21 March 2013 at Portland Hospital in London, England. The eldest son of the family is the big brother of 3-year-old India Casiraghi and 7-month-old Maximilian Rainer.

The proud parents of three adorable children exchanged the rings after a seven years relationship and eventually walked down the aisle in a civil ceremony in the Princely Palace of Monaco on 31st August 2013. The lovebirds were not married at the time of Alexandre’s birth and not included in the Monegasque line of succession. However, after the marriage of Andrea and his now-wife Tatiana, Prince Alexandre occupies the fifth position in the line of succession of the Monegasque throne.

Alexandre Is a Dapper Little Gentleman

The eldest son of the Royal couple, Andrea and Tatiana, Alexandre, is a beautiful young boy and loves dressing up like his father. In a boys’ day out for Andrea Casiraghi with his son Alexandre or Sacha, the father-son duo was successful in impressing the crowd as they stepped out for the Monaco Formula One Grand Prix on May 27, 2018.

The young and adorable five years old grandson of Princess Caroline, Sacha, looked sharp for his return to the race track. The young Prince was wearing a dapper blazer, light-coloured trousers, blue button-down shirt and a red tie. Besides that,  Andrea’s younger sibling, Pierre Casiraghi, joined the 33-year-old Monaco royal and his first born baby boy.

The eldest son of Andrea and Tatiana is not the only child in the family and has two younger siblings. The adorable Sacha is the elder brother of three years old, India, and seven months old, Maximilian. The lovely royal family blissfully lives in London and shares a strong and intimate bond.

Despite being a public figure, the family-of-four keeps a low profile and despises media interference. According to mother Tatiana, the birth of her first son changed her. Furthermore, the 34-year-old mother of four admitted that she doesn’t put herself first anymore. On being asked about the favourite part of pregnancy, Tatiana confesses of feeling complete.

The classic name “Alexandre” is a unique name for a baby boy. The French name has a Greek origin, and the lovely name means “Defender” or the “Protector of mankind”. The famous bearer of the name is Alexander the Great.