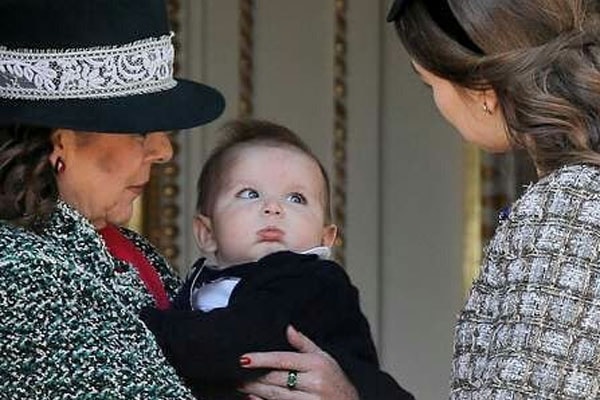 The eldest son of Princess of Hanover, Caroline’s son, Andrea Casiraghi is the father of seven months old little boy, Maximilian Rainier. The youngest child and the second born son of the family is the little brother of 5-year old Alexandre Andrea Stefano “Sasha” and 3-year-old India Casiraghi.

The royal parents of walked down the aisle in a religious ceremony in Gstaad, Switzerland on 1 February 2014. Despite being together for more than seven years, the relationship between the soulmates is still thriving and going strong.

The nephew of Monaco’s reigning monarch, Prince Albert’s son, Andrew Casiraghi and his wife, Tatiana were ecstatic to announce the arrival of their youngest son, Maximilian. The billionaire brewing heiress gave birth to the baby boy in Monaco on April 19, 2018. The eight months old prince is seventh in line for the throne after his elder siblings, Alexander “Sacha” and India.

The 33-year-old Casiraghi and his 34-year-old wife Santo Domingo kept out of the public eye during the pregnancy avoiding unnecessary meetings and events. Likewise, the royal couple were most notably absent from 2018’s Bad de la Rose. However, the lovebirds attended Monaco’s National Day in November. In a statement from the palace, Princess Caroline of Hanover and Madame Vera Santo Domingo (Mothers of Andrea and Tatiana) expressed their “joy” over their adorable new grandson.

Youngest Child of the Family

The proud parents of young Maximilian, Casiraghi and Santo Domingo, were already parents of two adorable children- Alexander “Sacha” and India Casiraghi. The third child of Andrea Casiraghi and Tatiana Santo Domingo, Maximilian is a brunette beauty with dazzling grey eyes. The youngest child of the family is pampered with love and is a jolly kid. The relationship between the children is strong and admired by fans and followers. Despite having a private family life, Maximilian was publicly showcased at the Monaco National Day on November 19, 2018.

The family name Maximilian is a unique name for a baby boy. The lovely name is a Roman family name and comes from a Latin origin. The name “Maximilianus” is a form of the name “Maximus” which means greatest. The name was borne from the Saint Maximilian of Tebessa, a 3rd-century saint and martyr. Likewise, Andrea and Tatiana’s son, Maximilian’s name is a homage to Prince Rainer III of Monaco. Grace Kelly’s husband and Andrea’s grandfather, Rainer, died in the year 2005.