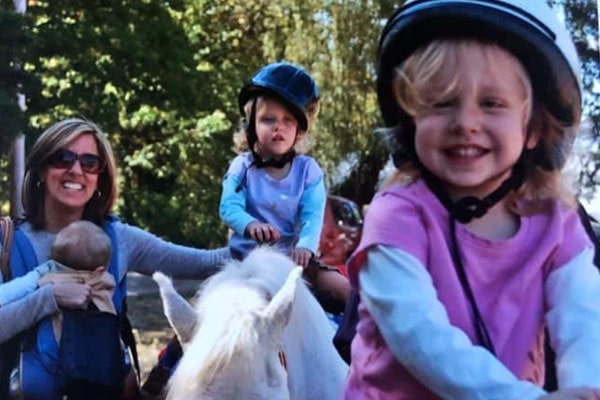 Alisyn Camerota is a proud mom to three children with her long-time husband, Tim Lewis, a successful investor. The good-looking couple, Alisyn and Tim, took their wedding vows in 2002 and welcomed their kids some years later. Together, the pair are raising their children, far from the reach of media scrutiny.

Here, let’s be familiar with more details on Alisyn Camerota’s children, Nathaniel Lewis, Francesca Lewis, and Alessandra Lewis, who are the main reasons behind Camerota and her husband’s happiness.

Aforementioned, the celebrity journalist Alisyn Camerota has three kids with her beloved husband, Tim Lewis. They have fraternal twin daughters, Francesca and Alessandra Lewis, and a son, Nathaniel Lewis.

Alisyn Camerota gave birth to her first children, Francesca and Alessandra, three years after her marriage with Tim Lewis in 2005. Fraternal twin daughters of Alisyn were born as a result of in vitro fertilization process.

Similarly, Alisyn Camerota’s son, Nathaniel Lewis, was born naturally in 2005. Alisyn’s second pregnancy was a happy surprise for the Camerota-Lewis household as she had trouble conceiving at first.

Camerota Had Several Miscarriages In The Past

The current doting momma to three teenagers, Alisyn Camerota and her spouse, Tim Lewis, went through several difficulties before welcoming their kids into the world. It took Alisyn three years and four rounds of in vitro fertilization to conceive her twin daughters. Reportedly, she got pregnant twice. But, unfortunately, both of these pregnancies resulted in miscarriages.

Furthermore, getting pregnant with her son, Nathaniel, was a big and happy surprise for both Alisyn and her supportive husband, Tim. According to Camerota, her doctors told her a million times that it would take her a lot of medical interference to have another child after her twins.

However, when Alisyn Camerota’s daughters were toddlers, Alisyn found out that she was sixteen weeks pregnant with her boy. A few hours before knowing that she was pregnant, Alisyn was out enjoying her birthday. Some of her friends noticed that she was struggling to zip up her pants. Immediately, Camerota told her husband to take her to an emergency doctor’s visit, thinking that something was not right with her abdomen.

To Alisyn’s surprise, her doctor told her that there was a big baby in her womb.

So, despite having many difficulties conceiving a baby in the past, Alisyn and her partner, Tim, never gave up their hope. As a result, they became parents to three gorgeous children, who are the light of their life.

Though Alisyn Camerota’s children rarely accompany their mom in public events, they often appear on her social media handles. Alisyn often shares photos and videos of her courteous kids on her Instagram and Facebook page.

Going through the pictures shared by Alisyn, it seems like her kids are full of energy. They are always ready for fun activities whenever their mom is home after her busy day. Moreover, the lively youngsters of Alisyn love to go on outings with their parents during their holidays.

Hence, it looks like Alisyn Camerota and Tim Lewis are doing great as parents. Despite their busy schedule, they set apart enough time for their kids to make them feel supported. In addition, they spend quality time with their teens and have meaningful conversations with them to broaden their social and emotional skills.

Alisyn’s Kids Have Always Been Her Support System

All three of Alisyn Camerota’s children, Nathaniel, Alessandra, and Francesca, are an amazing support system for their mom. Camerota’s kids are very interested and involved in her career in journalism and support her.

Some years ago, Alisyn Camerota alleged her former Fox News colleague Roger Ailes for sexually harassing her. After she decided to talk about her allegations publicly, her daughters were also with her in the room when the interview was airing. So they watched it together. After watching Alisyn’s interview, her daughters hugged her and said they are so proud of her.

The loving mom, Alisyn, is extremely happy that her kids are wise and compassionate. Moreover, she feels overjoyed when they show interest in her job and think about their own future career paths and choices. Also, they ask her about their parents’ day and their works and share theirs too, even when they are sworn to secrecy.

Alisyn Camerota’s kids’ interest in journalism implies that they might follow their mother’s footsteps in journalism shortly. However, for now, their focus is only on their studies and learning new things from their elders. We hope we will get to hear and see more updates on them soon.

Likewise, Alessandra is of Greek origin, which means defender of humankind.