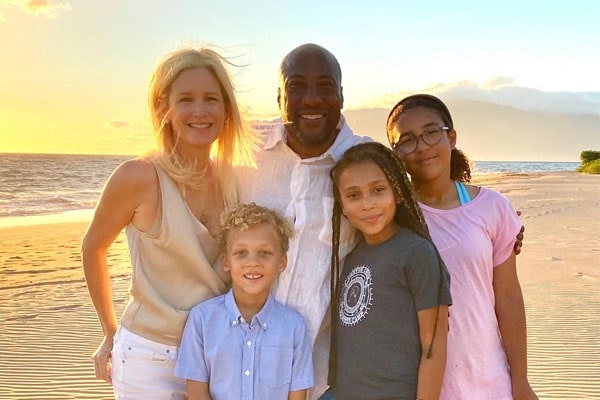 Byron Allen is one of the most successful American businessmen and comedians. Besides that, he is also a fortunate family man with a loving wife, Jennifer Lucas, and three cute kids. With Allen’s increasing stardom, people are showing interest in his personal life as well, including his children.

So, here, be familiar with the media personality, Byron Allen’s children, Chloe Ava Allen, Lucas Byron Allen, and Olivia Rose Allen. Also, know how all of them are growing up under the influence of their father’s fame.

Aforementioned, Byron Allen is a doting dad to three adorable kids, two daughters and one son, with his loving wife, Jennifer Lucas. Allen married his love, Jennifer, in 2007. A year after tying the knot, the lovely pair welcomed their first kid, daughter Chloe Ava Allen, on 22 August 2008. Their eldest child, Chloe, measured 17 inches long and weighed in at 7.14 lbs at the time of her birth at 2:15 pm.

Reportedly, Byron and his partner, Jennifer Lucas, had announced their pregnancy in April 2008, and Jennifer’s due date was 29 August. However, Byron Allen’s daughter, Chloe, was in a rush to join her mom and dad so she arrived a week early.

Similarly, Byron Allen’s second child with Jennifer, daughter, Olivia Rose Allen, arrived on 7 April 2010 at 12:11 pm. She weighed 8.7 lbs and measured 20.5 inches long at the time of her arrival. The proud parents, Byron and Jennifer, had announced their second pregnancy in the October of 2009.

While talking to People shortly before their first child Chloe’s birth, Jennifer had said that her spouse was going to be an amazing dad. And, Byron is undoubtedly proving his wife’s words. He is a really great father and is raising his three kids together with his wife, Jennifer, prioritizing them over his career.

One Of Byron Allen’s Children Is Active On Facebook

Most children and teenagers nowadays use social media pages to have fun, maintain friendships, and share their ideas. One of Byron Allen’s children, Chloe Allen, also shows interest in social networking. Currently, the thirteen-year-old daughter of Byron, Chloe is active on Facebook and occasionally shares her pictures on it.

Talking about Byron Allen’s younger kids, Olivia and Lucas, they are too young to have a social media account at the moment. But they often appear with their family on their parents’ social media handles.

Unlike many other celebrity parents, Byron Allen does not hesitate to take his kids to various public events like award ceremonies and film premieres. All three of his children also seem to enjoy going out with him, meeting other famous personalities, and getting captured by the photographers.

So happy my family came to surprise me today on the @MrBoxOfficeES set! #HappyBirthdayToMe pic.twitter.com/tWRrUqzFaJ

Besides, Byron Allen’s children often travel to various places around the globe during their vacations. Despite being one of the busiest entertainment personalities, Byron always makes time to spend some quality moments with his kids. He takes them shopping, camping, and other refreshing outdoor activities during their holidays.

Furthermore, Byron Allen’s children also often visit their father’s workplace on special occasions to surprise him. They also do not leave any stone unturned to show their parents how much they love them. Byron and his wife, Jennifer, feel blessed to have their little ones who lighten their lives.

The girl’s name Olivia is of Latin origin, which means peace of the olive tree. Similarly, the middle name Rose is a flower’s name.

Similarly, Lucas’s meaning is bright or shining, while the name Byron means at the byres or barn.

Likewise, Chloe is of ancient Greek origin, which means blooming or fertility, and Ava means life or living one.