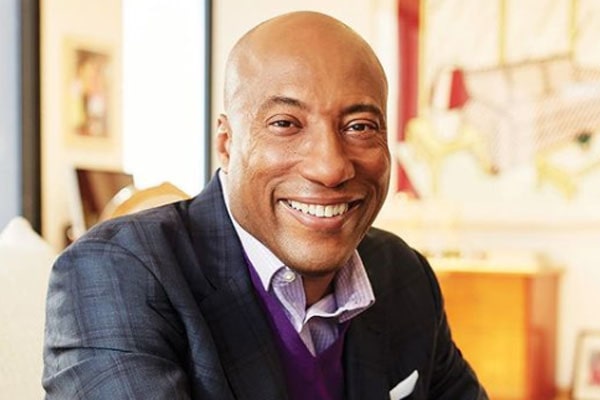 Byron Allen is one of the most affluent businessmen in the United States. Image Source: Instagram/ Entertainment Studios.

Celebrity status and wealth often go together. Take the media mogul Byron Allen as an example. His million-dollar income is deeply shocking in normal circumstances, but given his prominence in the entertainment industry, it isn’t surprising.

The former comedian, Allen might not be a billionaire yet, but he owns a billion-dollar global media company, Entertainment Studios, which might help him to achieve that rank too.

As of 2021, the African-American television producer Byron Allen’s net worth is estimated to be $450 million. So, how did he manage to draw in such a hefty amount of money to his total net value? Let’s find out.

Byron Allen Net Worth And Earnings As A Television Personality

The Detroit, Michigan-born Byron Allen worked in television as a comedian and co-host during his initial days in the entertainment industry. At first, he performed stand-up comedies at amateur nights in LA comedy clubs. But later, Allen got a proposal from comedian Jimmie Walker to join his comedy writing team alongside other comedians like Jay Leno and David Letterman.

Eventually, at age 18, Byron made his TV debut from ‘The Tonight Show Starring Johnny Carson.’ His first performance on The Tonight Show was so successful that he got an offer to co-host a new talk show named ‘Real People.’ Later, Allen also hosted another TV show titled Kickin’ It with Byron Allen.

Though Byron Allen might not have made a big sum of money as a stand-up comedian, he might have amassed a considerable amount of money, co-hosting a couple of TV shows. It also allowed him to know about the entertainment world and how dollars really worked in showbiz.

Earnings From His Media And Entertainment Company

Most of the money on Byron Allen’s net worth came from his media and entertainment company, Entertainment Studios, where he currently serves as a CEO and chairman. He co-founded the company by the name Allen Media Group (AMG) with his mother, Carolyn Folks, in 1993, with the launch of his first TV series ‘Entertainers with Byron Allen.’

After several years of hard work, Byron Allen finally succeeded in becoming the first TV entrepreneur to launch and own a portfolio of six 24-hour HD TV networks at the same time, in 2009. Companies owned by AMG in 2009 include Comedy.TV, Pets.TV, Recipe.TV, ES.TV, and Cars.TV.

Recently, Byron said in a statement that over the past year and a half, he and his company invested close to $1 billion to acquire top-tier broadcast network affiliates. He added that he and his team plan to invest approximately $10 billion to acquire more television stations over the next two years. Allen aims to make his company the largest broadcast TV group in the United States.

According to Hollywood Reporter, Byron Allen’s companies produce more than 30 nationally syndicated TV shows that bring in over $100 million each year in revenue. So, Byron Allen is earning millions from his company alone.

In addition to owning the Weather Channel, Byron Allen has not set his eyes on acquiring NFL’s Denver Broncos. While talking to CBS News, Allen revealed that he is a “Black Shark” who is always on the hunt. And it seems like the Broncos is his next prey.

Well, if Byron’s bid to acquire the Denver Broncos goes through, he will become the first African-American majority owner in the history of the NFL. This will be one more record in the long list that Byron has set throughout his journey in the business and entertainment world.

Instead of charging the network’s huge fees for the rights to shows, Byron Allen gives away his shows for free. He gets the right to sell 50% of the show’s advertising time in exchange for giving the shows for free, which he then sells directly.

Advertisers clamor to buy advertising time with Allen because he charges less money for the ad time while still earning 35 million viewers. Undoubtedly, Byron Allen really does have many techniques to expand his business, along with pocketing millions of dollars.

Byron Allen gained a lot of notoriety from 2015 to 2020 for suing Comcast Corp. for racism. The case even reached the U.S. Supreme Court. He wrapped up his five-year campaign against Comcast in 2020. Reportedly, Allen received $20 billion in settlement and gained carriage agreements for three of his cable channels.

Moreover, Byron Allen also had filed similar suits against Charter Communications and AT&T. He cited that those companies refused to carry channels owned by African-Americans. Moreover, Allen sued McDonald’s for $10 billion, alleging their engagement in racial discrimination in their ad spending process.

According to the complaints, Allen’s company comprises about 40% of McDonald’s customers. But, McDonald’s paid less than $5 million of its total $1.6 billion U.S. ad budget in 2019 to Allen’s media.

Media mogul Byron Allen’s net worth of $450 million is helping him to own multi-million dollars worth of mansions to live in and enjoy vacations with his family. In 2012, he and his wife, Jennifer Lucas, paid exactly $17 million to billionaire Texan banker Gerald J. Ford for a mansion in Beverly Hills.

Allen’s Beverly Hills mansion was vacant for several years as he wanted to demolish it and build a new mega-mansion there. And, it seems like finally, he is going to get it done. Recently, Allen took over an $80 million loan for demolishing it and building a 24,000 sq. ft. mega-mansion. So, hopefully, we will get to see the final look of his mansion soon.

Furthermore, in 2018, Allen reportedly paid $22.8 million for an ocean-front estate in Maui. Spectacularly set on Maui island, the contemporary villa’s exterior boasts coral stone finishing, while the interior is decorated with mahogany. Moreover, it features a 500-bottle wine cellar and 1,700 sq. ft. of outdoor living space in the form of lanais.

In 2019, Byron added two properties to his real estate portfolio. That year, he purchased a $20 million Beverly Hills mansion featuring 11,266 sq. ft of living space and eight bedrooms. Also, Allen picked up a 3,000 sq. ft apartment in one of NYC’s most expensive apartment buildings at 220 Central Park South paying $26.75 million.

Moreover, Byron Allen owns a mansion in Aspen, Colorado, which he bought in 2020 for $27 million. Also, he possesses a smaller home in Hollywood Hills, which he purchased several years ago.

So, Byron Allen earns enough to give himself and his family, including his three kids, a rich life. Besides, he also often utilizes millions from his total bank balance in philanthropic works. We hope his net worth keeps rising so that he can pay all his bills, taxes, insurance premiums, and give more for the good of humankind.