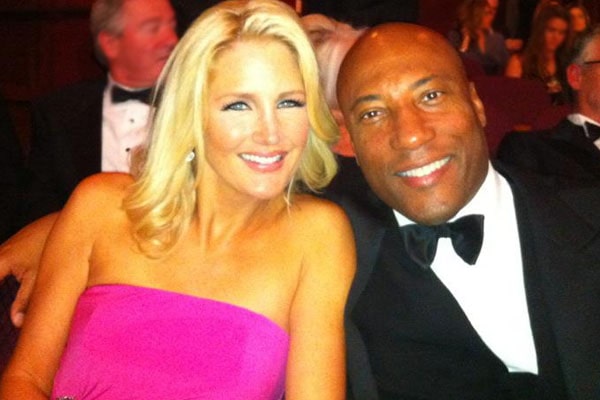 The Media mogul Byron Allen has been in a marital relationship with Jennifer Lucas for over a decade, proving that long-running marriage can exist in the entertainment world. They are enjoying their togetherness as husband and wife since September 2007. Unlike her husband Byron Allen, Jennifer Lucas may not have millions of fans worldwide, but she is as famous in her own right.

Byron Allen’s wife, Jennifer Lucas, is also active in the American Entertainment Industry like her celebrity husband. Here, let’s find out how she is contributing to the film industry. Also, know some interesting facts about her, including her personal and professional life.

The American businessman Byron Allen took his wedding vows with his then-girlfriend, Jennifer Lucas, in 2007, at the Beverly Hills, California-based iconic hotel, Hotel Bel-Air. Then deputy commissioner of civil marriages for LA County, Robert A. Ringler, officiated their wedding. A total of 120 friends and family members of the couple, including well-known figures like Natalie Cole and Eddie Murphy, attended their big day.

While talking about his wife, Jennifer, Allen told People that he couldn’t wait to see her walk down the aisle. Byron Allen’s wife, Jennifer, also said good words about their wedding day. She said that it was a romantic and meaningful ceremony to mark the beginning of the rest of their lives.

Following the wedding, their beautiful red-themed reception ceremony took place in the ballroom of Bel-Air hotel. Their wedding planner, Mindy Weiss, had decorated the room with thousands of red roses. Similarly, for dessert, there was a five-tiered cake with two different flavors by Cake Divas. There was a vanilla cake with dark chocolate filling and a dark chocolate cake with chocolate mousse filling.

Beautiful Jennifer Lucas, who kept her last name after marriage, met the love of her life, Byron Allen, in April 2001. Reportedly, Allen proposed to his then-girlfriend, Jennifer, with an engagement ring in December 2006 during a visit to Maui.

According to New York Times magazine, this is the second marriage of Bryan Allen, while it is Jennifer’s first marriage.

Jennifer Lucas is a mother to three kids, one son and two daughters, with her long-time husband, Byron Allen. She welcomed her first child with Allen, daughter Chloe Ava Allen on 22 August 2008 at 2:15 p.m. Her daughter measured 20 inches and weighed 7.14 lbs. at the time of her arrival.

Needless to say, Jennifer Lucas is raising all three of her children with Byron Allen with full dedication, love, and care. They can also be seen together with their mom and dad on various red carpet events.

Byron Allen’s wife, Jennifer Lucas, is a successful television producer. She is working as the supervising producer at her husband’s Entertainment Studios in Los Angeles. As a producer, Jennifer has helped produce TV shows like Comics Unleashed and Beautiful Homes & Great Estates.

Besides, as a producer, Jennifer Lucas is famous for her work in the movies such as Boss Level, Replicas, 47 meters Down, and Hostiles. Nevertheless, she might be earning millions from her career as a producer in her spouse’s billion-dollar Entertainment Studios.

Born And Raised In Minneapolis

The beautiful wife of Byron Allen, Jennifer Lucas, was born and raised in the city of the U.S. state of Minnesota, Minneapolis to Robert Lucas and Cheri Lucas. According to sources, her dad, Robert, is from Minneapolis, while her mom, Cheri, is from Los Angeles.

Jennifer Lucas attended and earned her degree from St. Cloud State University in St. Cloud, Minnesota. Unfortunately, additional details on Byron Allen’s spouse, Jennifer Lucas’s life before marrying him is still not available for the public.

Byron Allen and his wife, Jennifer Lucas, currently reside in a lavish 11,266 sq. ft. mansion in Beverly Hills, California, which Allen bought in 2019 for $19.9 million. Besides their current home built by the celeb-favored architect, Ken Ungar, they have another mansion in the same location.

Reportedly, Jennifer Lucas and her multi-millionaire husband, Byron Allen, paid $17 million to Texan banker Gerald J. Ford, for an oversized contemporary mansion in the north of Sunset Boulevard, in 2012. However, they have kept their house vacant for the last several years as they wanted to demolish it and build a 24,000 sq. ft. mega-mansion. But, due to some of their neighbor’s opposition, their plan was canceled.

Moreover, Lucas and her family sometimes spend their quality time together in their other home in the nearby Hollywood Hills. Also, they occasionally visit their most impressive residential property on Maui Island during their holidays.

Nevertheless, Allen and his spouse, Jennifer Lucas, are contented with their married life. Both of them are excelling and finding success in their own field. Hopefully, we might succeed in finding out more facts on Jennifer Lucas in the upcoming days.