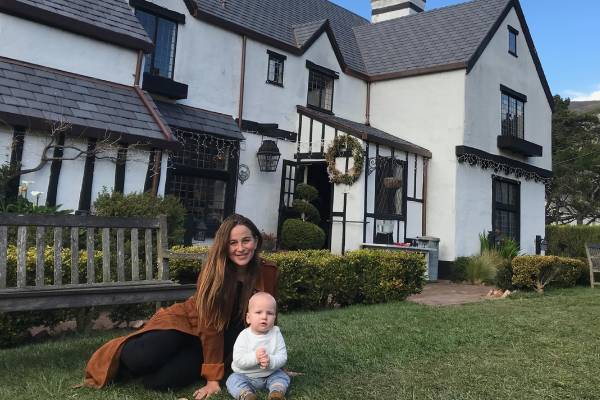 Arielle Goldrath has been married to Kevin McKidd since 2018. They are the doting parents of two children, a son, and a daughter. She came into prominence as Kevin McKidd’s wife.

For now, let’s learn more about the beautiful Arielle Goldrath and her personal life.

The famous Grey’s Anatomy star Kevin McKidd has been married twice in his life. After his first marriage ended, he began dating Arielle Goldrath. After being in a relationship for some time, they walked down the aisle on March 2, 2018, in an intimate wedding ceremony attended by their family and close friends at Calamigos Ranch in Malibu, California.

According to People, Rabbi Emma Lutz officiated the wedding. Kevin McKidd’s second wife, Arielle, wore a long-sleeved, floor-length, fitted, and lace gown while he wore a traditional green kilt from 21st Century Kilts. They were one of those celebrity couples who got married in secret.

Nonetheless, we can hope that marriage remains strong forever.

Have Two Kids Together

Arielle and Kevin welcomed two babies, a son, and a daughter, together. As mentioned above, Arielle’s husband, Kevin, had shared their pregnancy news via his website. Arielle gave birth to their son, Aiden McKidd, on May 13, 2018.

Similarly, the couple shared the news of the arrival of their baby boy via Instagram post, where Kevin wrote that they welcomed their baby boy on the beautiful Mother’s Day evening.

Similarly, Kevin and Arielle welcomed their daughter, Nava James McKidd, on July 27, 2019. Just like their son, they shared the news of their daughter’s birth via Instagram post. Arielle and Kevin are raising their children with great love and care.

Kevin McKidd’s Wife Is A Chef

Kevin McKidd’s spouse, Arielle Goldrath, is a private chef. However, due to her secretive nature, it has not been revealed anything about her workplace. Furthermore, in September 2019, Kevin uploaded her photo arranging food items. He wrote that she was making her culinary magic happen.

Nonetheless, Arielle might be doing great in her profession. Therefore, we hope that she achieves more success in the future.

Going through Arielle Goldrath’s Facebook, it seems like she loves horse riding. She has uploaded different pictures of her while horse riding. Similarly, her husband also posted a picture where they were seen riding a horse while on vacation.

Well, Kevin must be fortunate to have such an adventurous wife.

As stated above, Arielle Goldrath’s hubby, Kevin McKidd, has been married twice. Before tying the knot with her, he was married to Jane Parker, with whom he exchanged the vows on July 1, 1999. They were married for sixteen years before separating in October 2015 and filing the divorce in June 2016.

In their sixteen years of togetherness, Arielle’s husband welcomed two children, with his ex-wife, Jane. Arielle Goldrath’s stepson, Joseph McKidd, was born in 2000, and he celebrates his birthday in June. He is a student at Brown University.

Furthermore, Arielle Goldrath’s stepdaughter, Iona McKidd, was born in March 2002. She is enrolled at Kenyon College after graduating high school at Oakwood School in June 2020. She is also an artist.

Arielle has great relationships with both of her step-children. She seems to love spending time with them. Similarly, Iona and Joseph also love their step-mom and half-siblings.

Despite the fame that Kevin’s partner, Arielle, has gained, she seems to be a private person. Her Instagram is private, and she has made few public appearances with her husband. However, going through her Facebook, Kevin McKidd’s wife has posted mostly about contemporary issues and problems.

She has not revealed much about her personal life in media.

Nonetheless, Arielle seems to be doing great for herself and is living a comfortable life with her husband and children. So we can hope that Kevin’s partner succeeds in the future.