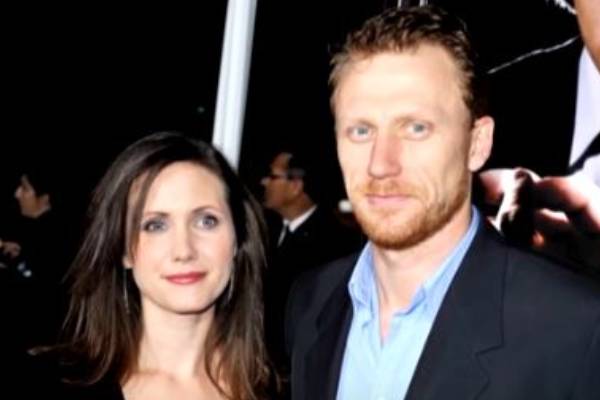 Kevin McKidd has been married twice in his life and his first wife is Jane Parker. Image Source: Social Media.

Jane Parker gained fame and recognition as Grey’s Anatomy star Kevin McKidd‘s former wife. They were married for sixteen years before their separation. In their more than a decade-long marriage, they welcomed two kids, a son and a daughter.

For now, let’s learn in detail about Kevin McKidd’s ex-wife, Jane Parker, and her whereabouts.

As mentioned earlier, Kevin McKidd has been married twice in his life. He was first married to Jane Parker, who was born in London, United Kingdom. Jane and Kevin walked down the aisle on July 1, 1999.

In their marriage, they welcomed two children and have raised their kids with great love and care.

However, Kevin’s marriage with Jane could not last long, and they separated in October 2015, after sixteen years of being married. A year after separation, Jane filed for a divorce from her estranged husband, Kevin, citing irreconcilable differences. Moreover, the divorce was finalized next year, in December 2017.

According to their divorce agreement, the formerly married pair agreed upon joint legal and physical custody. In addition, they also made “nesting arrangements,” which means the kids had remained living in their family home while she and her ex-partner rotated visits in and out. This ended sometime before 2018.

Talking about alimony, Jane Parker’s ex-husband paid $22,400 and $65,096 in child support and spousal support, respectively, every month. He also had to pay for the kids. After the kids turned 18, the child support obligations were terminated. However, Jane got an additional $12,147 a month as spousal support for four more years.

In addition, Kevin McKidd’s ex-wife also received 20 percent of any income that he made. As for their assets, she got to keep their Chevy Volt, and both of them kept one of their homes. However, the ex-couple shared ownership of the third property in Malibu.

Following the divorce, the duo seemed to have moved on in their respective lives. While it is unknown if Jane dated anyone, well, her ex-husband Kevin remarried.

Kevin exchanged the vows with his girlfriend, Arielle Goldrath, in March 2018. They also welcomed two kids, Aiden McKidd in May 2018 and Nava James McKidd in July 2019.

As mentioned before, Jane and Kevin were married for sixteen years, and in all those years of togetherness, they welcomed two kids, a son and a daughter. McKidd’s estranged wife, Jane, gave birth to their son, Joseph McKidd, in June 2000. Furthermore, Jane Parker’s daughter, Iona McKidd, with her ex-husband, was born in March 2002.

In addition, Jane Parker’s little girl, Iona, is an artist and has painted a 6’x8′ painting of Grey’s Anatomy‘s finale-inspired petals. The painting was later shown in the finale episode.

In one of her Facebook posts, Kevin McKidd’s former partner, Jane, is seen holding her camera and clicking some pictures. Well, it seems like she loves photography. However, as she is not really open about her profession, it is unsure if it’s just her hobby or a full-time job.

Nonetheless, we hope that she succeeds at whatever she is doing now.

As stated before, Jane rose to fame as Kevin McKidd’s wife. However, despite the fame that she has gained, she seems to be a private person. She has not posted much on her Facebook, and in addition, Jane has not made any public appearances since the divorce.

Nevertheless, we can hope that she is doing great for herself and has a great future ahead.