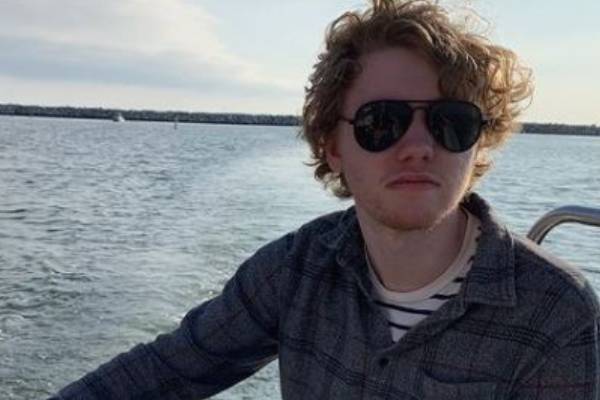 Joseph McKidd is the first-born of Kevin McKidd and his former wife, Jane Parker. He grew up alongside his sister and is now living a comfortable and happy life with his family.

For now, let’s get to know more about Kevin McKidd’s son, Joseph McKidd, and his personal life.

Is The Only Son Of The Actor

As stated earlier, Kevin McKidd was previously married to Jane Parker, with whom he has two children. The former couple welcomed their first child, Joseph McKidd, in June 2000. He is the only son of the ex-pair.

Joseph McKidd’s sister graduated from her high school, Oakwood school, in June 2020. She is the class of 2025 at Kenyon College. Furthermore, she is an artist and has painted Grey’s Anatomy’s finale-inspired petals painting, which was later showed in the episode.

Joseph and Iona seem to have a great sibling bond, and both of them grew up having a great time.

His Parents Are Divorced

Joseph McKidd’s dad, Kevin McKidd, has been married twice in his life. Kevin and his first wife, Jane Parker, exchanged the vows on July 1, 1999, and were married for sixteen years. Their marital life crumbled, and the pair separated in October 2015. Joseph McKidd’s mom, Jane, filed for the divorce from her estranged husband in June 2016, which was finalized in December 2017.

As mentioned earlier, Kevin and his ex-wife welcomed two kids in their marriage. Following the divorce, they made a “nesting arrangement” along with the joint legal custody of their children. Nesting arrangement means Kevin and Jane’s kid, Joseph and Iona, remained in their family home while their mom dad rotated visits in and out.

However, according to some documents, this arrangement ended sometime before June 2019 as Joseph and his sister turned 18.

Furthermore, Joseph McKidd’s papa, Kevin, had to pay $65,096 and $22,440 per month in spousal support and child support. The child support agreement terminated when each of Kevin McKidd’s children turned 18. In addition, Joseph’s dad paid for summer camp and private school for him and his sister.

Moreover, 20% of any income that Kevin made went directly to Jane. Talking about assets, Joseph McKidd’s mom and dad kept one of their homes each and shared the ownership of their third property. Similarly, Jane got to keep their 2014 Chevy Volt.

Has Two Half Siblings

Following the divorce, both of Joseph McKidd’s parents seem to have moved on in their respective lives. Kevin dated Arielle Goldrath before walking down the aisle with her in March 2018.

Two months after their marriage, Joseph McKidd’s stepmom gave birth to his half-brother, Aiden McKidd, in May 2018. Furthermore, Joseph’s dad and his second wife welcomed his half-sister, Nava James McKidd, in July 2019.

Kevin McKidd’s child, Joseph, loves both of his half-siblings and enjoys quality time with them. He also has a great bond with his stepmom.

Kevin McKidd’s kid, Joseph McKidd, is all grown up now. He attended Oakwood School and completed his schooling in May 2018. His father shared the news of the completion of his high school studies via Instagram. Kevin recalled the time he used to take Joseph to school and even mentioned that he is proud of him and to be his dad.

After finishing his high school education, Joseph attended the Brown University. However, information about Joseph’s major has not been revealed yet. Nonetheless, we hope that he has a great time at the university.

Accompanies His Dad To Several Events

As stated earlier, Joseph McKidd’s dad is a successful actor who came into prominence for his character of Owen Hunt in Grey’s Anatomy. Joseph must be delighted to see his dad achieving success in his work. He often accompanies his old man to several events. For example, in November 2017, he attended the Emmy Awards with his dad.

Furthermore, in May 2016, Joseph was with his dad on the set of Grey’s Anatomy while shooting episode 22 of the 12th season of the show. Kevin must be grateful to have such supporting kids.

Unlike his sister, Kevin McKidd’s son, Joseph McKidd seems to prefer a private lifestyle. His Instagram is private, and he does not post that often on his Facebook.

Nonetheless, it looks like Joseph is doing great in his life. Here’s to hoping that he gets successful in his life.

The name Joseph has Hebrew origin, which means “God Will Increase.”