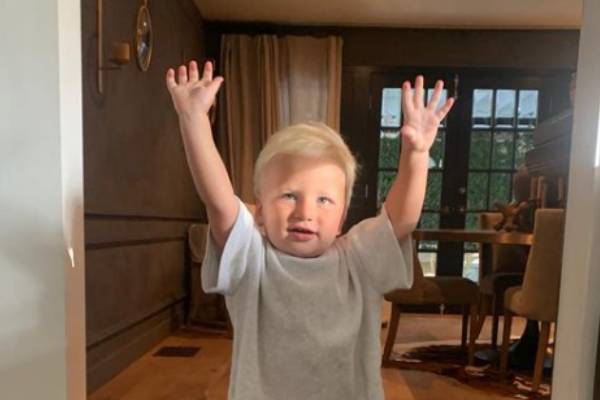 Aiden McKidd is the first-born of Grey’s Anatomy star Kevin McKidd and his second wife, Arielle Goldrath. He is growing up in LA with his siblings and parents. At such a young age, he has already gained massive fame as Kevin McKidd’s child.

For now, let’s learn in detail about Kevin McKidd’s son, Aiden McKidd, and his whereabouts.

Is The First Child Of The Couple

As mentioned earlier, Kevin McKidd shares a blissful marital life with Arielle Goldrath. The adorable couple dated for a while before tying the knot on March 2, 2018. Aiden McKidd’s dad shared the news of their marriage and the pregnancy through his website, where he wrote that he and Arielle were happy to announce their marriage and new baby.

Two months after their marriage, Kevin and Arielle gave birth to their baby boy, Aiden McKidd, on May 13, 2018. He shared the news of the baby’s birth via Instagram. Furthermore, in July 2019, the McKidd family welcomed Aiden’s baby sister, Nava James McKidd.

Well, Aiden McKidd’s dad and mom are raising him with immense love and care.

In an interview with People in November 2019, Kevin McKidd mentioned that his son, Aiden, has started to run and began saying certain words. Aiden was 18 months at that time, and Kevin mentioned that he began swimming underwater and loves it.

Well, with an immense love for the water, who knows, Aiden might become a successful swimmer in the future.

Kevin McKidd’s child, Aiden, is growing up having a great time with his siblings, and he loves to enjoy time with all of them.

As mentioned earlier, Aiden McKidd’s dad, Kevin McKidd, has been married twice in his life. Before tying the knot with Arielle Goldrath, he was married to Jane Parker. They exchanged the vows on July 1, 1999. In their marriage, they welcomed two children, a son, and a daughter.

Aiden McKidd’s half-brother, Joseph McKidd, was born in June 2000. Two years later, Kevin and his former wife welcomed their daughter, Iona McKidd, in March 2002. McKidd’s dad and Jane were married for sixteen years before they separated in October 2015.

A year later, in June 2016, Jane filed for divorce, and it was finalized in December 2017. Talking about alimony, Aiden’s dad had to pay $65,096 and $22,440 as spousal support and child support, respectively. The child support arrangement ended after Aiden McKidd’s half-siblings turned 18. Kevin and Jane made a nesting arrangement along with joint legal and physical custody of their children.

Furthermore, talking about assets, Aiden McKidd’s stepmother and dad kept one of their houses each and shared the ownership of their third property in Malibu. Also, Jane kept their 2014 Chevy Volt.

Aiden McKidd’s half-siblings, Iona and Joseph, remained in their family home after their parents’ divorce. However, they are no longer staying with their parents but visits Aiden and his baby sister. All of the siblings seem to have a great bond.

His Dad Is A Renowned Actor

Well, Aiden McKidd is the third born of Kevin McKidd, who is a renowned Scottish actor. He has acted in different films and series, which have helped him gain immense fame and fortune to his name. Furthermore, he came into prominence for his role of Owen Hunt in Shonda Rhimes’s medical drama series Grey’s Anatomy.

As for Aiden McKidd’s mom, she is a private chef and loves horse riding. Aiden’s parents are doing great for themselves in their respective careers. The lovely pair are raising their children with great love and care.

Aiden McKidd might follow in his dad’s or mom’s footsteps. Plus, will he even gain more success than his dad-mom? Well, only time will tell.

Nonetheless, we can hope that Kevin McKidd’s kid, Aiden McKidd has a great future ahead.

The name Aiden has an Irish origin, which means “Little Fire.”