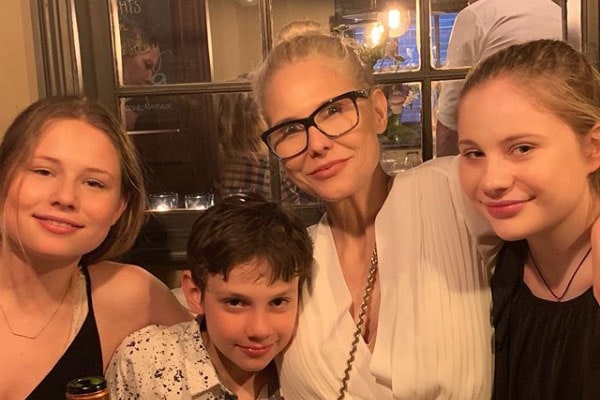 Gorgeous Amy S. Foster, who is a Canadian songwriter and author, is the mother of three children, two daughters, and an adorable son. If you didn’t know, Amy is the daughter of record producer and songwriter David Foster and B.J. Cook. Amy also has four half-siblings, Allison Jones Foster, Erin Foster, Sara Foster, Jordan Foster, and Tamre Winger.

Amy had her two daughters, Mikaela Foster and Eva Foster, with her ex-husband, Simon Gillies. Then she went on to marry her current husband, Matthew Freeman, in 2012. The married couple is parents to their son Vaughn Freeman. So, without any further ado, let’s get straight down and know more about all of Amy S. Foster’s children.

Gorgeous Mikaela Gillies is Amy S. Foster’s eldest child with her ex-husband, Simon Gillies, and was born on Jan 17, 1999. Mikaela has two younger siblings, Eva and Vaughn. She is close to both her sister and half-brother. Well, it looks like Mikaela has opted for their mother’s surname.

Going through Mikaela Foster’s Instagram, she looks to be living a normal life even if she is a celebrity kid. The gorgeous girl probably has a happy and splendid life. As for her love life and relationship, she seems to have a boyfriend. The last time she posted a photo of her with him was in Dec 2017. So, it’s hard to know whether they are still together or not.

But, other than that, Mikaela enjoys hanging out with her friends and families. It seems as though she loves clicking photos and making good memories too.

Born on Aug 2, 2003, Eva Foster is the second daughter of the ex-couple, Amy and Simon. She is the middle child and has an elder sister named Mikaela Foster and a young half-brother, Vaughn Freeman.

Just like Mikaela, Eva does not concern anything about being a celebrity kid. The two sisters are like best buds. If you go through Eva Foster’s Instagram, she is seen mostly seen with her sister, Mikaela. The Foster sisters seem to have a great bond and connection with each other. Not only that but also she is close to her half-brother, Vaughn.

Last but not least, Vaughn is Amy S. Foster’s youngest child and, at the same time, the first child with her husband, Matthew Freeman. He was born as the youngest of all on Aug 3, 2010. Vaughn has two beautiful half-sisters, Mikaela and Eva. He is extremely fortunate to have such loving and caring sisters for sure.

In one of Amy’s Instagram posts, she stated that her son goes to baseball camp, ninja camp and also plays Minecraft. And then, after watching RuPaul’s Drag Race, he would dress up in drag as Jasmine Tea, putting on tons of makeup. Well, Amy is an ideal mother as she is always with her son. She also asked why a boy would not want to put on makeup. It’s all just play and fun.

Amy loves her son from the bottom of her heart. Amy often takes him out with her daughters. She also frequently posts adorable photos of Vaughn on her Instagram.

So, in all, we can see that Amy is a doting mother and doing whatever she can to raise them well. And even after having her own children, Amy has once again become a big sister. Her father, David Foster, became a father again as his wife, Katharine McPhee, gave birth to a healthy baby boy. The new parents are thrilled, and Foster’s children are also pretty excited about their young brother.

Mikaela Foster – According to English origin, the name, Mikaela, refers to ‘gift from God.’

Eva Foster – Similarly, Eva means ‘life’ or ‘living one’ according to the Hebrew name ‘Eve.’