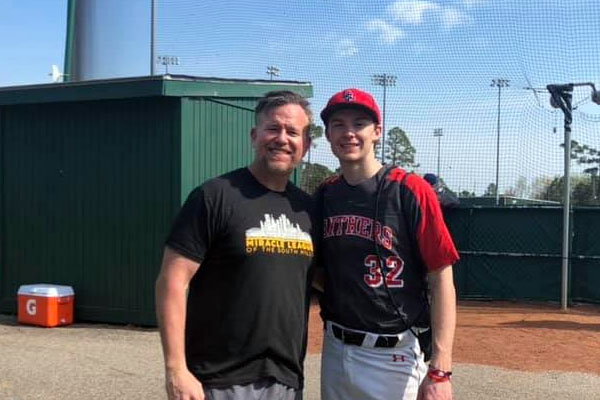 Almost every sports fan worldwide might be familiar with the professional life of the legendary former Major League Baseball player, Sean Casey. However, only a few might know details about his personal life, including his wife, Mandi Casey, and their four children.

Here, in this article, we will be tailing Sean Casey’s son, Andrew Casey, who is also pursuing a career in the field of baseball. So, stick with us till the end of this article to know everything about Andrew Casey.

Andrew Casey is the firstborn of the long-time married pair, Sean Casey and Mandi Casey. Reportedly, Andrew joined Sean and Mandi’s small family on 25 October 2001. His parents welcomed him two years after their marriage, which was held on 6 November 1999.

Furthermore, Sean Casey’s son, Andrew Casey, became a big brother for the first time with the arrival of his brother, Jacob Casey, aka Jake Casey, in 2002. Similarly, his two younger sisters, Carli Casey and Jillian Casey joined their expanding family later in 2006 and 2010, respectively.

Currently, Andrew’s only brother, Jacob, is working towards establishing himself as a successful baseball player. Passionate about the game since childhood, Jake played during his high school years at Upper Saint Clair High School. Currently, he is committed to Kent State University.

Similarly, Andrew Casey’s sisters Carli and Jillian usually stay far from the reach of the media scrutiny. They currently live a peaceful life like any other kids and are undoubtedly supportive of their brothers.

Following In His Father’s Footsteps To The Sports Industry

Like many other kids of famous personalities, Sean Casey’s son, Andrew Casey, is also following in his dad’s footsteps in the sports industry. Though his father never forced him to choose baseball as his career, Casey had an inclination towards the game since his early days. So, growing up, Andrew decided to play baseball and find success in it.

Currently, Andrew is a 4-year starter for the Los Angeles-based, University of Southern California. The former Upper Saint Clair’s three-year varsity player had received a scholarship offer from the University of Dayton. However, he chose to play with USC’s athletic team.

In an attempt to avoid comparisons to his dad, Andrew originally played outfield in youth leagues. But, lately, with a dream to be a professional baseball player, he receives hitting suggestions from his dad and takes instructions from Sean’s former batting coach, Frank Porco. Besides, Andrew also does strength and conditioning workouts and works hard on the mental aspect of baseball.

Apart from baseball, Andrew Casey excels on the basketball court also. As a basketball player, he played for the Panthers in the past. He also developed into one of the better hitters in the WPIAL, being a .350-plus hitter by his junior year.

So, Andrew Casey is excellent in both basketball and baseball. However, he chose to pursue his career in baseball, with his dad, Sean, as his biggest supporter.

And with his growing popularity, the oldest Casey offspring’s love life is also under scrutiny. But sadly, there is nothing on Andrew Casey’s girlfriend/partner. But let’s hope he introduces his other half in the coming days.

A Great Influence On His Younger Brother

Andrew Casey is not just excelling in the game, but also he is a great influencer to his younger brother, Jacob. In 2020, while talking to the almanac, Jacob said that Andrew has been quite influential. He set an example for his younger brother, which was not difficult to follow.

According to Jacob, Andrew pushed him hard to be the next Casey to go DI. He added that his brother is a good person to look up to as he works his fingers to his bones. Moreover, Andrew does not bug his younger brother, but he is hardworking, and that helps his siblings too.

Hence, Sean Casey’s son, Andrew does not just focus on his career but also simultaneously helps his siblings achieve their goals. We hope his love and support for his family remain the same in the upcoming days.

The masculine name Andrew is a modification of the Greek name Andreas which means strong and manly.