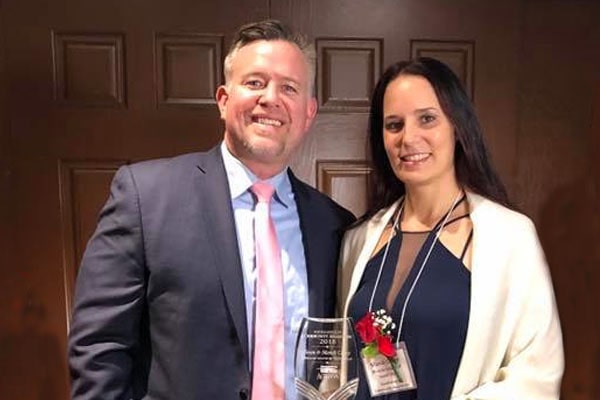 There are several celebrities worldwide who are successful in their professional life but mostly unlucky when it comes to their love life. But, still, some renowned personalities have found success in both their professional and family life.

And, among the list of those lucky stars is the baseball legend, Sean Casey. He is not only fortunate in his career but in his marital life as well. Sean is in a happy marital relationship with Mandi Casey, born Samandra Kanka, since late 1999.

So, who is Sean Casey’s wife, Mandi Casey? Let’s find it out here, along with details about their blissful marital life.

Mandi Casey walked down the aisle with the current commentator for the MLB Network, Sean Casey, on 6 November 1999. The year 1999 proved to be the year of good luck for Sean as he also won the prestigious Hutch Award that year. The award is given in honor of late professional baseball player Fred Hutchinson.

Furthermore, the beautiful married pair of Mandi Casey and Sean Casey reportedly got together in 1998 after meeting in Akron. Sean did not wait long to propose to his then-girlfriend, Mandi, with a beautiful engagement ring. And ten months later, in 1999, the pair were married.

In over two decades of togetherness as husband and wife, Mandi and Sean experienced many ups and downs in their lives. However, they always dealt with them together and maintained harmony in their relationship. And, today, the Casey pair is one of the exemplary couples in the world of sports and entertainment.

The decades-long dedication to each other has not just given Mandi Casey and Sean Casey marital bliss but has also blessed them with four energetic kids. They are parents to two sons, Jacob Casey and Andrew Casey, and two daughters, Carli Casey and Jillian Casey.

Both of Sean Casey’s sons with his spouse, Mandi, Jacob and Andrew, inherited their father’s athletic skills. Growing up, they also developed an inclination towards the sports that their dad found fame in.

Sean Casey’s firstborn, Andrew, is currently a budding baseball player. At the moment, he is a four-year starter for USC at first base. Similarly, the Casey couple’s second son, Jacob aka Jake Casey, is also a good baseball player at Steel City Wildcats and is committed to Kent State University.

On the other hand, both of Mandi and Sean Casey’s daughters, Carli, and Jillian stay away from the limelight. So, most of their details are still a mystery to many. Possibly, they are also great players but the girls might not be ready to show themselves off and their talents.

The former University of Akron volleyball player Mandi Casey is involved in community service with her loving husband, Sean Casey. The couple’s latest project is the Miracle League Field of South Hills in Upper St. Clair, where both of them grew up.

The Caseys raised around $1 million, including $50K donated by themselves for their facility’s construction and maintenance in 2011. Their facility is a rubber-coated, wheelchair-friendly, T-ball-sized baseball field for adults and children with special needs.

Currently, Sean Casey’s wife, Mandi Casey, is the vice-president of the Miracle League of the South Hills, where Sean is the president. Other board members of their facility include Dave Hall, Mark Miller, Kyle Robinson, and nine of their close friends and relatives.

Moreover, Mandi, who taught behaviorally and emotionally handicapped children in Charlotte in the past, is also a vital member of their clubhouse, Casey’s Clubhouse. While Sean stands front and center at their clubhouse, which is a useful fundraising tool, Mandi operates the ship. She handles the details, including planning, scheduling, writing, and answering e-mails and letters.

For her contribution to her community, Mandi has won various titles and awards to date. For example, in 2018, she and her philanthropic husband, Sean, received the Excellence in Community Awareness award from ACHIEVA for their work with their Miracle League. Similarly, in 2019, the Casey couple received the Ken Wagner Award at the Emmaus Kentucky Derby Gala.

Hence, Mandi Casey is supportive of her famous husband in every step of his life. Their understanding and support for each other all these years are the key reasons for their long-lasting marriage. We wish the pair good luck for their upcoming days.