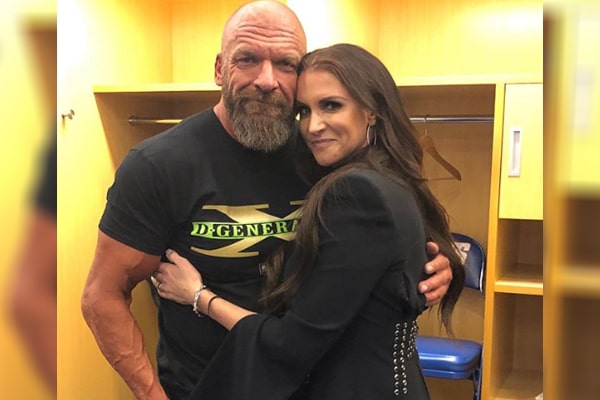 As a member of the McMahon family, Stephanie McMahon is a fourth-generation wrestling promoter. She has worked for WWE since she was a young girl working her way up to a receptionist and currently the CBO (chief brand officer).

Following her success in WWE, Stephanie is enjoying a blissful marital life with the fellow champ, Paul Levesque, better known as Triple H. The pair share three daughters while in their decades-long conjugal. For now, we shall be tailing the eldest in the Levesque family, Aurora Rose Levesque. Let’s get your mind blown by this fantastic little one.

Aurora is not the only child in the family; she has two more siblings to have fun with. Her sisters, Murphy Claire Levesque, and Vaughn Evelyn Levesque were born in 2008 and 2010, respectively. All three siblings share an impeccable bond with their parents and love to be around. However, they have kept their children secluded from the media scrutiny.

Stephanie McMahon knows how hectic it gets both in school and out in the world being exposed from an early age. Hence, her decision to keep her daughter away from the television is plausible. Plus, it looks like the feisty teen seems to have decided her path already.

Very Much Into Pro Wrestling

Aforementioned, Stephanie McMahon’s daughter is already walking on her father, Paul, aka Triple H’s footsteps. While talking to Fox’s First Thing First, Stephanie was asked if she’d encourage her daughters for WWE. Answering the question, she revealed that her eldest daughter, Aurora, was already preparing her way to become a professional wrestler.

McMahon’s daughter, Aurora, was trained by Natalya as her heart is set on wanting to become the women’s champ. According to ESPN, Stephanie revealed that she grew up with a powerful role model, Linda McMohan, who also served as the CEO of WWE, she wants her daughters to explore the boundless opportunities. She further wants her daughters, including Aurora, to believe in themselves and work hard.

Looks like the WWE bug bit Aurora real bad as she has set her mind on WWE since very early. Furthermore, she was overjoyed when her father, Triple H, won the Royal Ruble. Aurora’s mother revealed that she had a video of her where she was enthralled.

As for Aurora’s television appearance, it is scarce, but we can expect Triple H’s daughter’s face frequently in the future and watch her win the title.

While talking about the baby girl, why don’t we take a moment and appreciate the baby makers, Stephanie, and Paul Levesque? The pair’s romance started as a show and gradually grew into much more.

In an interview, Stephanie admitted that it was not ‘the love at first sight but the chemistry on the spot.’ The pair shared their vows on 5 October 2003 and welcomed their daughters together.

Being a mother and a full-time worker is too much of a hassle. And to handle the entire WWE singlehandedly is ghastly. But Stephanie does them all. She makes sure her babies are well fed, take them to school, make sure they are healthy, and make sure her business is right.

Thus, Aurora Rose Levesque and her siblings have someone to look up to. Let’s hope to see Stephanie McMahon and Triple H’s daughter in the future with a full-on bang.

The name Aurora is of Latin origin, which means Dawn. Likewise, Rose is of English origin and means a flower.