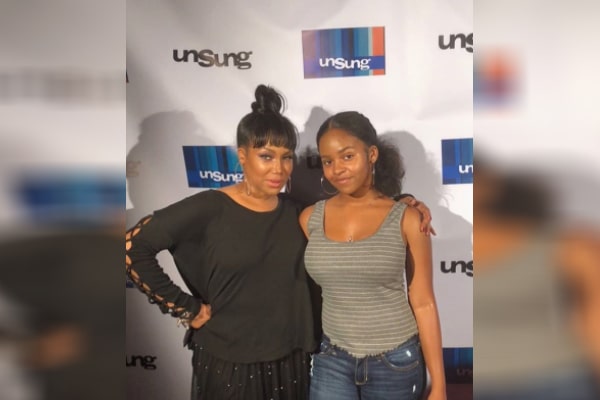 Michel’le Denise Toussant, famously known as Michel’le, is an American R&B singer-songwriter and rapper. Best known for her songs from the late 80s to early 90s, most notable songs were two Billboard R&B chart-toppers. She was further a subject of the biopic Surviving Campton: Dre, Suge & Michel’le.

Only Kid To Michel’le And Suge Knight

Among many things that went wrong between R&B hitmaker, Michel’le and former executive, Suge Knight, the only thing that they did right was welcoming their only daughter, Bailei Knight, on Earth.

Suge Knight’s daughter, Bailei, was born in 2002 from their six years long marriage. Unfortunately, Bailei is away from social media even though she has come of age. However, her mother, Michel’le, updates her child’s growth now and then. She further shares a lot in common with her baby girl and shows their similarities with the world.

Like Knight’s mother, Michel’le’s fame was mostly because of her relationship with music mogul Dr. Dre and former executive, Suge; she too rose to fame through her parents. However, she is doing her thing, i.e., studying, etc.

Bailei further appears with her mother, Michel’le, on several events. Although we do not know much of Michel’le’s daughter, she is doing great secretly. In hopes of seeing her more in the future, let’s move on to her parents’ marriage.

Aforementioned, Bailei Knight’s parents were married shortly. The pair got married in 1999 while Suge was still in prison. Their love story has a dramatic turn as Michel’le used to be Dr.Dre’s fiancee and baby mama.

Michel’le’s relationship with Dr. Dre was pretty tumultuous as she had to go through some severe abuse while being engaged. While welcoming the former couple’s first child, their relationship became more strained due to Dr. Dre’s drinking, aggression, and infidelity. She was brutally abused throughout their relationship.

After breaking off her engagement with Dr.Dre, she began self-medication with prescription pills and alcohol. Then Suge intervened and helped get Bailei Knight’s mother to get clean by sending her to rehab. Eventually, they fell in love and welcomed their only kid.

Unfortunately, Suge and Michel’le’s marriage was not a success. The pair went through highs and lows throughout their relationship. Michel’le’s marriage came to an end with her filing for divorce in 2005. She further realized that her marriage to Suge was invalid through the divorce process as he was still married to his ex-wife, Sharitha Knight.

Like her previous relationship with Dre, Michel’le reported abuse that caused a dislocated jaw. She later went to court over unpaid child support and spousal support in 2009, which shows a lack of involvement of Suge in his daughter’s life.

Aforementioned, Knight and Michel’le’s daughter was born in 2002, and they separated when Bailei was pretty small. However, Suge Knight’s daughter, Bailei, is not that close to him since he wasn’t around to be with.

Furthermore, Bailei’s mother uploaded an Insta post, captioned ‘#unfathereddaughter,’ which proves that Suge was away for the most part. Similarly, Suge couldn’t be around his daughter because of his consecutive run-ins with legal issues.

However, the former music mogul, Suge Knight’s ex-wife, Michel’le, endured the abusive relationship but will never stop her daughter from seeing her father in prison.

Knight’s dad was sent to prison for violating parole when he struck a parking lot attendant in 2003, a year after Bailei’s birth. After that, Suge continuously faced several lawsuits, including voluntary manslaughter in 2015, which sent him in prison for 28 years.

Despite facing several allegations, the father-daughter duo was seen occasionally during the 2000s. Though maintaining a visit and all in prison, lack of Father’s presence in Bailei’s life doesn’t make much difference.

Being Suge Knight’s kid must have been difficult. Michel’le’s babygirl, Bailei, had to accept the harsh truth of sharing her blood with a murderer father and a former music executive.

Even worse, Bailei is aware of her Father’s violent nature as her mother, Michel’le, showed the CCTV footage of Suge running over two guys. In an exclusive interview with Daily Mail, she stated that she would find out about Knight’s crimes anyway and hence showed the footage.

As stated above, despite being charged for murder and attempted murder, Michel’le doesn’t stop her daughter from visiting Suge. Well, not much is available about the beautiful teen, but let’s hope the tape and other news of Suge haven’t scarred her much.

Like Michel’le’s kid, Bailei Knight has secretive nature. Her half-siblings are as mysterious as her. As stated above, Knight’s mother was previously engaged to Dr. Dre and welcomed her half-brother, Marcel Young. He, too, maintains private life like Bailei.

Similarly, Bailei has several half-siblings from her Father’s side, including Suge Jacob Knight. Jacob is a blooming real estate agent with a show of his own in VH1. While Jacob enjoys fame, Knight’s other half-siblings, Taj Knight, Andrew Payan, Posh Knight, and Legend Knight, live privately away from the media’s approach.

In conclusion, although Michel’le’s daughter, Bailei Knight with Suge is enjoying a private life, let’s hope to see her rocking her beautiful face and talent in the coming days.

The name Bailei means bailiff and has English origin.