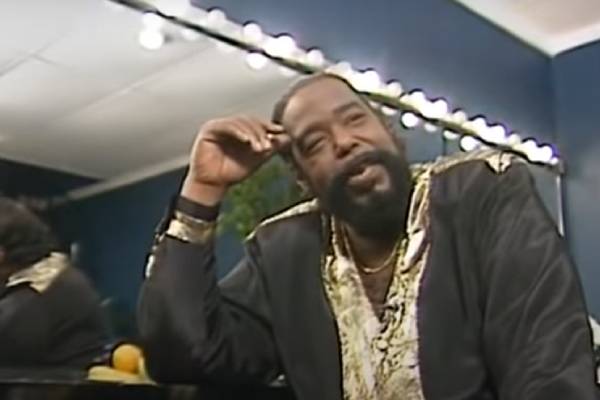 The renowned singer and songwriter, Barry White married two women and had a bunch of children. Image Source: Social Media.

One of the most respected singers and songwriters, Barry Eugene Carter, is professionally known as Barry White. He was famous for his unique and deep voice, which earned him Grammy Award twice. Sadly, the talented singer passed away in 2003. However, he will continue to live in the hearts of his fans and family.

Talking about his personal life, the late songwriter first married Betty Smith in 1962 and divorced her just after three years in 1965. Afterward, he tied the knot with Glodean James in 1974. Although they lived separately since 1988, the pair were legally married until the iconic singer’s death. Did you know the late musician had many kids from his two marriages? If not, follow us till the end to know all of Barry White’s children.

Darryl White is the son of the late singer and his ex-wife, Betty. He has followed in his dad’s footsteps and pursued a career as a singer. However, it is not known if he is still active in the music industry. But, his music video from a few years ago has a lot of views on YouTube.

In addition, Barry White’s son has remained private about his life too. He is already at the age where he might have a family of his own with few kids. Hopefully, he is doing well in his personal and professional life. Furthermore, after his death, the late songwriter’s boy, Darryl White, sued his wife, Glodean, for his estate. There was a long battle among the White family in the court. Let’s hope the matter ended amicably.

Also Read: Get To Know The Granddaughter Of Hip-Hop Sylvia Robinson

Brigette White Hancock, formerly Brigette White, is the daughter of the late vocalist and his second wife, Glodean. She has a younger sister, Shaherah White. Also, the late songwriter’s baby girl is married with three adorable kids. She is active on Facebook and often shares pictures with her babies and husband. Brigette White’s children are Jason Hancock, Justin Hancock, and Brittany Hancock.

Moreover, Barry White’s granddaughter, Brittany, is a recording artist, model, dancer, and co-star of a YouTube Show, BRANTHUNY SHOW. At the same time, the late singer’s grandson, Jason, is into dancing and is pursuing his career in the same field. For instance, he danced in the Netflix movie, The Prom.

Barry White’s daughter, Shaherah White, must have been influenced by him to become a singer. She began her singing career at a young age. Not only that, but she also sang background vocals on her dad’s songs. In addition, the father-daughter duo recorded a song together. She also worked as a personal assistant to her dad. Besides that, the beautiful girl currently performs for private audiences in more intimate settings. Among all Barry White’s children, only a few have been involved in the music industry.

Apart from that, Shaherah also runs a business of customized dining service, LovesDelicious. She is also the founder of a band, Love Manifested. In addition, the baby girl of the late singer has appeared in several documentaries about him.

Alongside a rocking career, Shaherah also leads a beautiful family of four. However, Shaherah White’s husband’s identity is still confidential. She also rarely shares pictures with her spouse. But in 2016, she posted a photo of her holding her partner’s hand with a sweet caption. Besides, Barry and Glodean’s baby girl has welcomed two children, a daughter, Ayannah Love, and a son whose name has not been revealed.

Shaherah White’s daughter is a writer and director of Little White Shadows Film. She is also the co-founder of the brand Twin Embers.

All Of Barry White’s Children Have Grown Up

Despite all the fame, other kids of Barry have remained out of the public eye. Additionally, there is not much information regarding Barry White’s children, Barry White Jr., Nina White, Melva White, MacKevin White, and Denise White.

Hopefully, the late musician’s beloved kids will come at ease and open up about their personal and professional life in the coming days. We wish Barry White’s children a happy and prosperous life ahead.

Barry is a name of Gaelic origin that means Fair-haired. The Irish word Mac means son, while Kevin is also of Irish origin, meaning Handsome. So, combining, MacKevin will mean A Handsome Son. And, an English name Darryl means Person from Airelle.

Brigette is a French name that means Strength. Whereas, the Irish name Melva means Gentle Lady. Finally, Denise is of French origin, which means “to be devoted to Bacchus.”