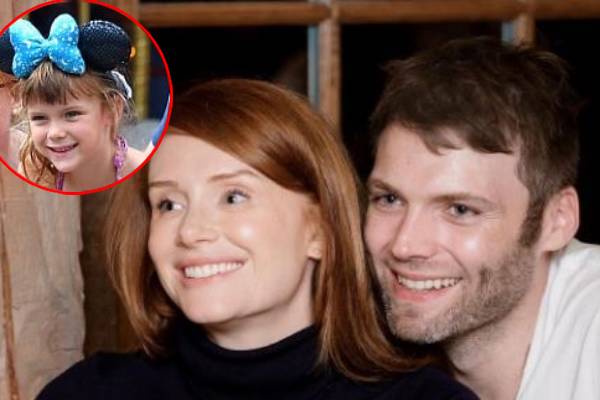 Seth Gabel is a well-known name in the acting industry. He came into the limelight for his role of agent Lincoln Lee in the television series Fringe. Besides that, Gabel has acted in several other movies and television series, which has helped him gain immense fame.

The well-known actor is married to popular actress Bryce Dallas Howard, whom he met while at the university. The lovebirds have been together for more than two decades now and are proud parents of two.

So, let’s know more about Seth Gabel’s daughter Beatrice Jean Howard-Gabel, and see how she is growing up.

Beatrice’s parents, Seth and Bryce, met while attending New York University’s Tisch School of the Arts. After a while, the pair began their relationship, and they went on to date for the next five years. Then, on June 17, 2006, the duo walked down the aisle.

Six years after their marriage, on January 19, 2012, Seth Gabel’s little girl Beatrice Jean Howard-Gabel was born. She is the second child of her parents and has an elder sibling. Beatrice’s brother, Theodore Norman Howard-Gabel, also known as Theo Howard Gabel, was born on February 16, 2007.

In August 2011, Seth’s son had predicted that his second kid would be a girl. Well, his prediction came true and Theo now has a sister in his life. Well, Beatrice and his brother are growing up in a loving household.

Beatrice’s Parents Are Raising Her Away From The Media

Beatrice is born to celebrity parents as both her dad and mom are well-known actors. Despite being well-known in the world, Bryce and Seth prefer to keep their personal life private. As a result, Beatrice and her brother are growing up away from the media limelight.

Seth and Bryce want to keep their son and daughter away from Hollywood’s glamorous style. They were inspired to do so by Bryce’s dad, i.e., Beatrice’s grandfather, Ron Howard, who is a TV star and filmmaker. Beatrice’s mom, her uncle, and aunts also grew up away from the spotlight.

Ron took them to film sets while making movies and introduced them to the crew, but he did not expose them to limelight. The Howard siblings rarely attended premieres or red carpet events as that is perceived as being glamorous.

Beatrice’s mom revealed that keeping her family life low-profile was easy for her. Thus, Seth Gabel’s daughter with Bryce Dallas Howard might know what her parents’ work is, but it might take time for her to understand the glamorous world.

Being a celebrity kid, Seth Gabel’s daughter Beatrice often gets to be on movie sets. While there, she even formed a good bond with one of the celebrity kids.

When Beatrice’s mom, Bryce, was working together with Chris Pratt in Jurassic World: Fallen Kingdom, she met with Jack Pratt, Chris’s son. While talking on The Ellen Degeneres Show, Chris revealed that Jack was fond of Beatrice, and he would often put on a dreamy voice whenever he spoke about her.

Moreover, in another interview, Chris stated that Jack has a puzzle of a picture of them together. Moreover, he even joked about the kids getting married. Beatrice’s mom also added that they would be good in-laws.

Similarly, Beatrice Jean Howard-Gabel’s mother also stated that the kids have an incredible friendship, and she hopes that they’ll remain close for their whole life. Plus, who knows, we might see Beatrice and Jack together in a project in the coming days.

Is Living A Wonderful Life

Seth and his wife Bryce have earned significantly from their entertainment career. As a result, they are able to provide a good life for their son and daughter. Beatrice must be living a wonderful life with her brother and parents. The little one travels to several places with her family, and she often has a huge celebration on her birthdays.

Furthermore, it is too soon for Bryce Dallas Howard’s daughter to know about her career. But, who knows, she might get into the acting line as she comes from an entertainment household. Sadly, her parents have not revealed much about her interests in the media.

Nevertheless, let’s hope we get to see Seth Gabel’s daughter succeed in any profession she pursues. Plus, we wish to see her in the media in the coming days.

Beatrice is an Italian name, and it means Voyager or Traveler. The name Jean has an English origin, and it means God Is Gracious.