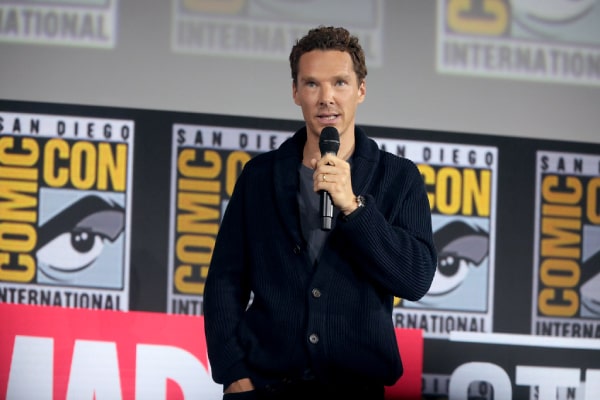 Multiple award-winning British actor Benedict Cumberbatch is widely known to play the sorcerer Doctor Strange in the marvel cinematic universe and the titular character in BBC’s Sherlock Holmes. The academy award nominee had his big break playing the super detective Sherlock Holmes but was always considered a brilliant actor.

MCU’s Doctor Strange not only has had success in acting but also found major happiness in his personal life. Married to the equally talented actor-turned-opera-director, Sophie Hunter back on Valentine’s Day of 2015, the gifted couple have two wonderful sons Christopher Carlton Cumberbatch and Hal Auden Cumberbatch.

There are also rumors about a third Cumberbatch baby, but today let’s take a look into Benedict Cumberbatch’s son, Hal Auden Cumberbatch, and his whereabouts.

Benedict Cumberbatch’s son; Hal Auden Cumberbatch was born on the 3rd of March, 2017 only after a couple of years from his elder brother. The secondborn in the Cumberbatch family is named after a Shakespearean character and an American poet.

Only a couple of weeks before Hal’s birth, his father Benedict appeared on The Kelly & Ryan show to discuss having a new member in the family. However, since the actor is very reserved in nature his answers were short and private.

In a separate interview, Hal’s father the multiple-time BAFTA winner commented – I’m now a father of two and a husband, just with the right order. I might go for a Cumber-batch of boys!”

MCU’s favorite doctor also feels more responsible as a father after his second child was born. Hal’s parents, one of Britain’s power couples have taken extra precautions in providing minimal information about their personal life.

As both Hal’s mother and father are talented in their respective fields, it is only up to the now 4-year-old to decide which career path to take in the future. Either be a leading man on the big screens, like the Sherlock actor or be behind the scenes directing like his mother, young Hal can get all the guidance he needs.

Regardless of who his parents are, it is up to Benedict Cumberbatch’s son, Hal, to decide whether to follow in his parent’s footsteps or not.

Shortly after marrying, the first Hunter-Cumberbatch baby; Christopher Carlton Cumberbatch affectionately called “Kit” was born on the 1st of June, 2015. As Carlton is Cumberbatch’s middle name that has been passed on for generations, it was only fitting for Hal’s brother; the firstborn to inherit it.

Despite who his parents are, the current five-year-old is enjoying a normal childhood like all other children.

Although Benedict Cumberbatch and his wife Sophie Hunter are very reserved when it comes to their boys, they are not shy to flex their love for the literary world. As the pair come from a theater background, they are highly inspired by classical literature.

So much so that Hal’s talented parents named him after a nickname given to Hanry V in William Shakespeare’s play of the same name. Whereas, Auden comes from a renowned poet; W.H. Auden.

Regardless of having distinctive names, Benedict Cumberbatch’s sons, or as the fans call them “cumberbaby” are very much unseen to the public eyes.

The voice of 2018’s Shere Khan and The Grinch, Cumberbatch may be rocking the big screen with his various, limitless roles but in reality, is very private. His wife Sophie Hunter having the same nature has made the MCU star at ease, when it comes to personal life.

Considering the fact of the couple announcing their engagement in a British broadsheet section, you can see how little attention they want regarding their personal matters.

As Hal’s parents are keeping things low profile, it has really helped him and his brother to enjoy a spotlight-free childhood. Expecting the fact of how much a celebrity’s star power can hamper their child’s upbringing, the Sherlock star, and his wife have taken the right measures in being discreet.

They also are not active socially as you can’t find them on any major social media platform. London’s famous private detective acknowledges the fact of keeping things to themselves has allowed him to bond more and grow as a family.

Hal May Have A Younger Sibling

Benedict Cumberbatch’s son Hal and his elder brother Kit may or already have had a newborn sibling. Despite debuting a baby bump and an outgrown stomach by the director of the experimental play; The Terrific Electric in September of 2020 on a red carpet, the couple haven’t shared any news regarding it.

The Doctor Strange actor even said –

“People who think my wife and my children as a PR stunt, really has to do with the idea of the internet boyfriend. Can’t belong to anyone else but just the internet.”

Hal’s talented parents aren’t seen out in public and keep things very reserved. However, their red carpet appearance surely did glaze the eyes of their fans making it obvious to everyone that a new cumber-baby is to be revealed soon.

As a family man, the Sherlock actor has made the safety of his wife and children a focal point. As for Benedict Cumberbatch’s sons Hal and Kit, who are very young at the moment may decide on whether to be in front of the media or to follow their parent’s way as they grow up.

It is always nice to see talented stars enjoy their life to the fullest as a result of their hard work and contribution to the industry. Both Benedict Cumberbatch and Sophie Hunter, though keeping things quiet, can surely be seen enjoying quality family life, keeping the showbiz aside giving Hal and his other siblings their space to grow up.