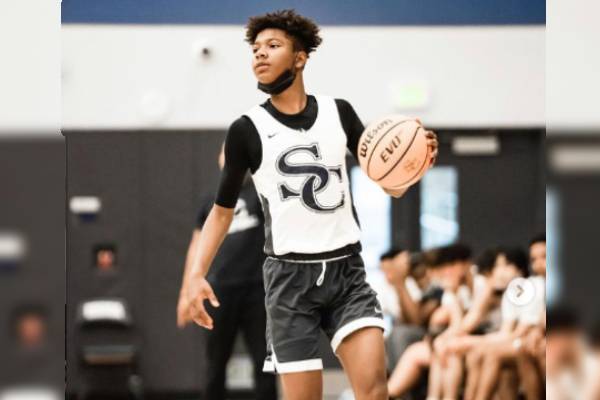 Kurt Alexander, aka Big Boy, is a prominent radio host and actor of American nationality. The famous personality got his nickname for his former self with a large build. In addition, the radio host is also an actor and producer mainly known for starring in Deuce Bigalow: Male Gigolo, Charlie’s Angels: Full Throttle, and The Longest Yard.

Alongside his flourishing professional life, the Chicago native is a proud dad of two adorable kids whom he shares with his longtime wife, Veronica Alexander. His children are growing up. Also, his son is into sports and has already accomplished considerable success.

Thus, today’s talk is about Big Boy’s son, Jay Money Alexander. Follow us till the end to get to know the amazing guy.

Jay Money Alexander, also known as Jayden Alexander, was born on 02 February 2007 to his parents. His father and mother must have been delighted and thrilled to welcome him into this world. Besides, Jay also has a lovely sister, Jaide Chula Alexander, who was born on 24 September 2008.

Furthermore, Big Boy’s daughter completed her middle school education in May 2022 at Sierra Canyon School in Chatsworth, California. The beautiful girl seems to be of outgoing and cheerful personality. She often shares pictures of her hanging out with her besties in different places.

Besides, the Alexander siblings don’t seem to have much age gap and must have been playmates growing up. As a result, they must be close to each other. Hopefully, the brother-sister duo’s bond will continue to grow stronger in the coming days.

Big Boy’s Son Is Into Basketball

The radio host’s baby boy goes to Sierra Canyon High School. Also, he is highly involved with the school’s basketball team. He is a shifty point guard with a killer instinct and elite passing ability. Unlike his father, who is one of the most successful individuals in the entertainment industry, Jay seems to be more fond of basketball. In addition, the young athlete has been involved in sports since a young age.

Furthermore, in February 2020, Jay was confirmed to participate in the DSTRKT Winter Combine. At that time, he was in 7th grade. Ever since childhood, the radio host’s son has demonstrated his skills and is now one of the most promising basketball players.

Jayden’s family members are also proud of him. They often share about his progress in games on their social media. In addition, the rising basketballer’s parents and little sister attend and cheer him during his matches. Also, once Big Boy was praised for being a wonderful dad. At that time, he became emotional and held back his tears.

Shot An Advertisement With His Dad

Big Boy’s son is also getting a lot of attention from the media and public. As a result, he must have signed many lucrative deals with several brands, which would pay a pretty penny. Recently, Jayden and his father shot a commercial to promote the brand, Slaucienega.

Considering his rising popularity, there is no doubt that the high schooler will get more endorsement deals from several other brands. Besides, Big Boy’s son is still at the early stage of his playing career. He is yet to start college but has already earned quite a recognition. So, will we see him getting drafted in the NBA sometime in the future?

Thus, Jayden Alexander’s net worth will continue to grow in the coming days. On the other hand, his dad, Big Boy’s net worth, is reported to be $8 million. Also, his fortune benefits from his impressive salary, i.e., $3.5 million per year. In addition, the Alexander family must be living comfortably, all thanks to the radio host’s huge fortune.

Likewise, Jay’s love life is also a topic of interest among people. His dashing looks and excellent playing skills must have increased his popularity. But, the answers regarding Jay Money Alexander’s girlfriend are yet to divulged as of now.

Overall, the REAL 92.3 host’s son has grown up to be an amazing kid. He is now one of the most looked after basketball players at Sierra Canyon. Moreover, Jayden’s parents and sibling are proud of him. We wish the young athlete a successful career ahead.

Jayden is a name of Hebrew origin that means Thankful, and God will judge. On the other hand, the English name Jay means To Rejoice. Meanwhile, the French name Money is a nickname for a rich man or a moneyer.