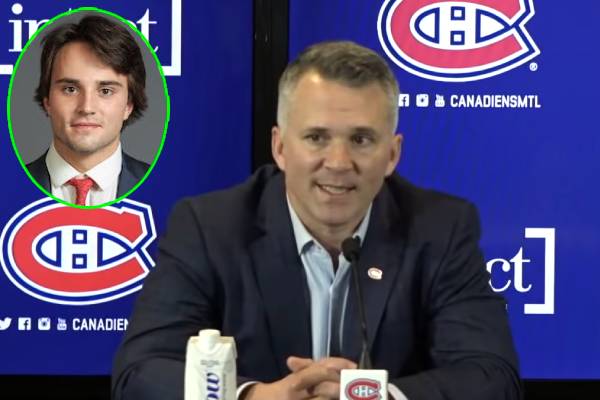 Martin St. Louis is a former professional ice hockey player and talented NHL coach of Canadian nationality. He is the current head coach of the famous NHL team, Montreal Canadiens. The Quebec native started his coaching career in February 2022 and is still serving the league.

Did you know the former player is a proud father of three children? Well, the coach has been married to Heather Anne Caragol since 15 July 2000. The lovely pair has created a beautiful family of five. Additionally, all of his kids have grown up and followed in his footsteps. Thus, in today’s article, let’s get to know Martin St. Louis’ son Ryan St. Louis.

Is The First Child Of His Parents

Ryan St. Louis was born on 13 June 2003 as the first baby to his parents. His father and mother must have been delighted and thrilled about his safe arrival. Moreover, the eldest St. Louis has two adorable younger brothers. They are Lucas St. Louis and Mason St. Louis, born on 30 March 2005, and 2008, respectively.

18 years old – wow where did the time go! Happy bday Ryan! Proud of the young man you are becoming. #keeppushing pic.twitter.com/U9kMPSQDvr

Ryan’s brother, Lucas, is a student at Brunswick High School. In addition, he is also involved in the school’s ice hockey team. Also, he is committed to Harvard University. On the other hand, Mason is also into hockey and is involved with the Mid Fairfield Rangers 13U AAA.

Besides, Martin St. Louis‘ boys must have grown up with a happy childhood. The bunch doesn’t have much age gap; as a result, their relationship is undoubtedly solid. Also, since the whole family is into hockey, they must bond over hockey games. Hopefully, their connection will continue to grow stronger in the coming days.

Martin St. Louis’ Son Has Followed In His Footsteps

As the child of an ice hockey professional, Ryan must have inherited the love for sports. In addition, he must have been trained from a young age. As a result, the beloved boy is now an active student-athlete at Northeastern University. He is currently a freshman and is highly active in the college’s ice hockey team. He is set to graduate in 2025.

The rising hockey athlete completed his high school education at Brunswick High School. Even during his school years, he showed remarkable performances. He played 49 games for the school and recorded 17 goals and 24 assists.

Moreover, the young guy also previously played in US National U18 and U17 teams. He recorded 14 goals with 12 assists in a total of 50 games in the USNTDP (USHL). Apart from that, he was also named to the USA U18 World Championship Team.

Furthermore, Martin St. Louis’ son is doing great and has demonstrated himself as one of the promising ice hockey players. So, will we see him in the NHL someday? We wish the handsome guy good luck and a bright future ahead.

Talking about his fortune, the young athlete has just begun his collegiate career. However, considering all the fame and attention he is getting, he must have got several lucrative opportunities for brand endorsements. Thus, Ryan St. Louis’ net worth must be a considerable sum. On the other hand, his dad, Martin St. Louis’ net worth is $40 million.

Considering their father’s riches, Ryan and his siblings must have grown up comfortably. Let’s hope the St. Louis family accomplishes more success and continues to live contently in the coming days.

Who Is Ryan St. Louis’ Girlfriend?

Despite all the attention and fame, the young ice hockey player has kept his personal life under wraps. He is active on Twitter. However, Ryan has not posted anything and seems to be focused on his career and education. But, could it be he is dating someone secretly? If so, he must be avoiding unnecessary attention from the media and public.

Above all, anyone who is or will be Ryan St. Louis’ girlfriend is a lucky person. All in all, Martin St. Louis’ son is a university student and a talented ice hockey player. In addition, his father and mother are proud of him. We wish the beloved son a successful career and a happy life ahead.

Ryan is an Irish name derived from the Gaelic words righ and an, which together mean A Little King.